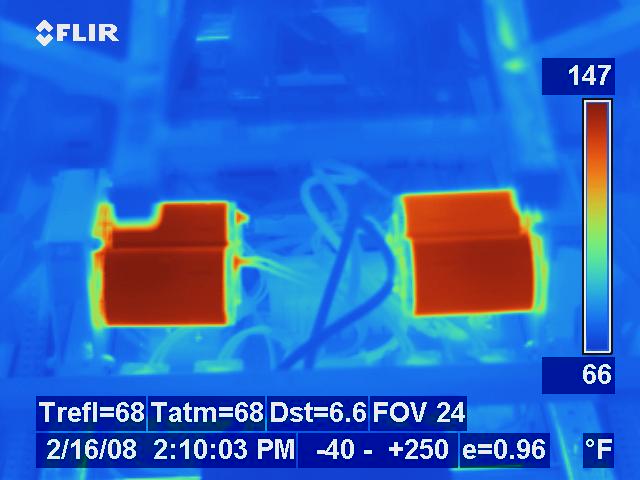 A thermal image of our CIM motors after a few matches at Quincy’s mini-meet - at 147 degrees it was time to let them cool down a bit!

Looks like our robot after a pushing match on high gear!

Where’d you get the thermal camera?

That’s really cool…not literally, but you know what I mean. I like how the Victors never, ever get hot. They can take so much abuse.

Yea, we started smelling ours yesterday and thought it was a good idea to let it cool off. When we lifted our hood (hint) it was probably 20 degrees warmer than the outside.

Where’d you get the thermal camera?

One of our electrical mentors borrowed it from Work…he had been using it on a project there. It is approximately a $100K piece of equipment, so he didn’t exactly let us play with it! It does have some neat other functions though…

It was nice to see how hot things got while running around on the field. It was easy to tell if one motor was doing more work than the other (notice one set of CIMs is hotter…it seems we make more left turns in this game). It was also fun to watch the trails of heat our tires left on the carpet (100+ deg) after turning.

It was nice to see how hot things got while running around on the field. It was easy to tell if one motor was doing more work than the other (notice one set of CIMs is hotter…it seems we make more left turns in this game). It was also fun to watch the trails of heat our tires left on the carpet (100+ deg) after turning.

You could just use the “thermal camera” on a Macbook. The CIMs are black so it would show them as really hot

(BTW that’s really really cool. Is that the same type of forward looking infrared they use on F-18’s?)

you stole a predator mask?

Do you still have this equipment at your shop? I’d like you to try something that I’ve wanted to try for a while:

When your robot is cool, power it up and then take a thermal image picture of the electrical system. I think that this same tool can show points where crimps and connectors are not fastened or connected very well. These hot spots could predict where loose connections may occur after a few minutes of driving.

If you don’t have any hot spots, then your connectors and crimps are good. Being the Rhode Warriors that you are, this is most likely the case. You could also go to the effort of fabricating a poor crimp and testing to see if this imaging tool can detect it.

IF this works and detects poor connections and crimps, I would imagine that a tool like this would be very valuable at a FIRST event on inspection and practice day. I can see a line of robots waiting to be thermally inspected to see if their crimps and connections are robust.

I’m speculating that this tool will do this, as I am a mechanical engineer and not an electrician.

Tom Frank replying (the guy who borrowed the camera).

Yes, a thermal camera will show bad crimps and connections, but not when it’s cold. You run the system for a while, and look for the HOT spots, because the higher resistance results in a voltage drop and overheating at the point of the problem.

This is commonly done in industry - they look at things like electric panels or overhead wires, and the places where there is too much heat are where the problems are. I found a bad chip in a complex circuit board this way…

Occasionally, you’ll find a point which is flat out cold, which suggests there is nothing going on (no power at all), but that is a good deal rarer.

It would probably be worth bringing one to the competition for troubleshooting misbehaving bots…but I don’t know that my employer would let me take ours. They were hesitant to let me take it, but in the end the magic word “FIRST”, plus the fact that it is a weekend (no one is around anyway…), convinced them.

It belongs to facilities, who use it to find steam leaks and leaking roofs (you can see where water is pooling under the sheathing).

I wonder if FIRST could get FLIR (or one of their competitors) to loan them one?