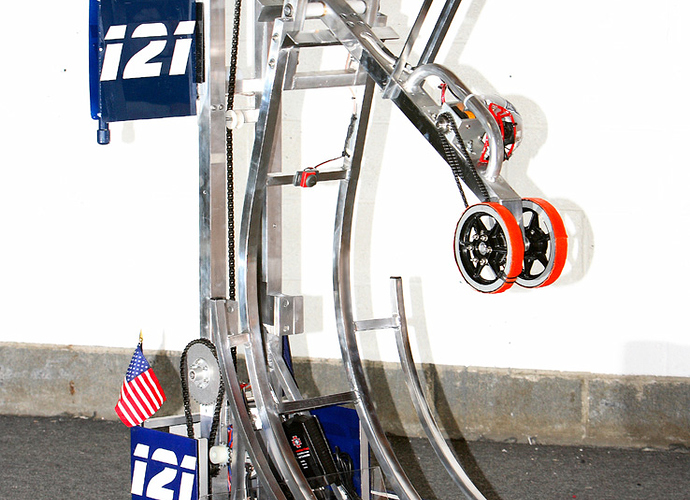 Video of our first lap with this design can be seen here: http://www.chiefdelphi.com/forums/showthread.php?t=62626

Nice…Your design was actually our inspiration…

What’s with the orange wheels?

What’s with the orange wheels?

They are colored to match our power boost system…

they look cool, thats what. very nice, almost has a “take over the world” gleam to it. I like.

They are colored to match our power boost system…

anyways to give a real answer to the first question… its just a new material for better grip on the ball… not sure what it is… but it does like pretty doesn’t it???

It looks nice now. Too bad it will probably get less shiny come regional time.

I know I have said it to a few people already, but this is my favorite robot I have seen so far… Who’dve thunk it would come from those pesky RhodeWarriors???

your original teaser video was probably the most inspiring during the build season on Chief Delphi.
I can think of so many teams that have tried to create a robot either “like” yours or similar to your bot.
I know of a few rookie teams here in Hawaii that used you as inspiration in addition to a few others on here.

It looks nice now. Too bad it will probably get less shiny come regional time.

we plan on keeping it shiny for a long while:)

the orange material is from chemical spill gloves we picked up at a local hardware store. nice and grippy.