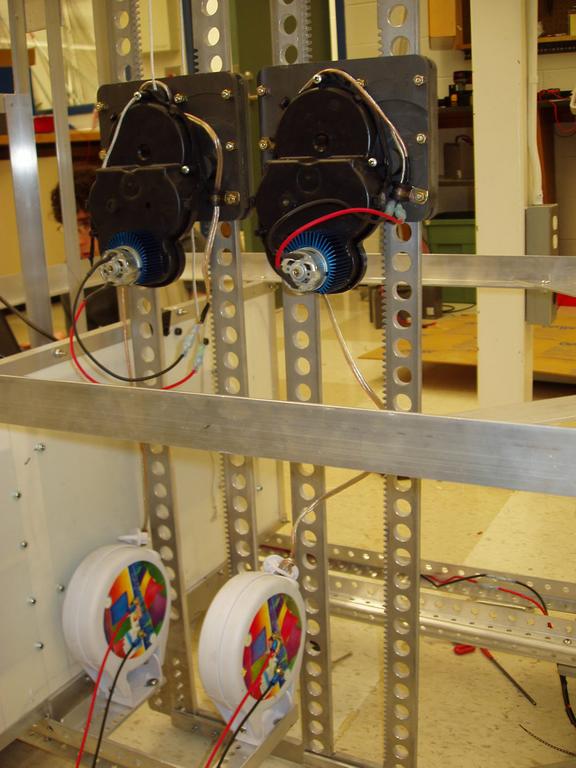 Here are the fisher price motors in the down position. As the motors walk up the racks the homemade 14 gauge cord reels allow the right amount of cord when needed. The cord reels are easy to make and light (less than a pound each). They are made with two easy to get off the shelf items. Each should cost less than $30. If there is interest in how to make these Jack Jones or I (Steve Liggett) can post a white paper.

:)for all I know you may have found a cheaper lighter reel off the shelf

can you please give some more information about your spools. we want to know if it can be modified to allow for pneumatic tubing.
thanks and it looks awesome!

How high can you lift?

can you please give some more information about your spools. we want to know if it can be modified to allow for pneumatic tubing.
thanks and it looks awesome!

I don’t know how you would do it with pnuematics. you should pick one up at the home depot and play with it I think there 8 bucks. It’s a clothes line reel.

How high can you lift?

the highest part of our robot reaches 13.5 feet and can withstand a emergency stop with one tetra all the way up.

hey, can you post the white papers (or email if you prefer) on how you put that together.we came up with the idea to use something like that to hold the slack on the pulley system for our arm but we werent sure how to do that.

Well. It’s not as easy as Steve made it sound. First off, the total cost - not counting the 14 ga. wire - is about $50. Secondly, it took an incredible piece of luck to come up with a reliable setup.

The reel is a plastic clothesline reel available at either Home Depot or Lowe’s. The bulk of the $50 comes from the 14 ga. triple tap extension cord reel - also at Home Depot. The slip rings from the power cord reel fit perfectly in the clothes line reel’s hub. I do mean perfectly!!

The remaining $10 is where the real (pun) lucky part comes in. The actual reel in the Home Depot clothesline retractor was made of PVC with a metal side that held the coil spring in. The metal side was attached to the PVC by melted tabs, which disintegrated in no time. The resulting slop caused the slip rings to loose contact. Just so happened that I’d also bought a couple of the clothes line reels from Lowe’s – same manufacturer, but different, those had metal mounting brackets and, more importantly, the actual reel was made of nylon with twice as many tabs, which were also melted to hold the metal side. My guess is that the one that Home Depot still sells does not survive many washdays; and that Loews now sells the upgraded version.

Alas, they also upgraded the case to include a collar around the spindle for the reel, wicht meant that the slip ring contact legs were no longer a perfect fit. So, we needed the POC clothesline reel for the case, and the “new improved’ one for the reel. That’s how we end up spending $50/per. J

I can post the part numbers if anyone is desperate enough to try. Even though I’ve found out time and again that Lowe’s carries better stuff than the crap you find at Home Depot, I can’t guarantee it.

Slack on pulley system – now you’re talkin bout something that may work for you – especially if it’s something like Spectra String. Just pull a bunch of the clothes line out, cut it where you feel it’s the right tension – attach it to the cable – it should pull it right back into the reel.