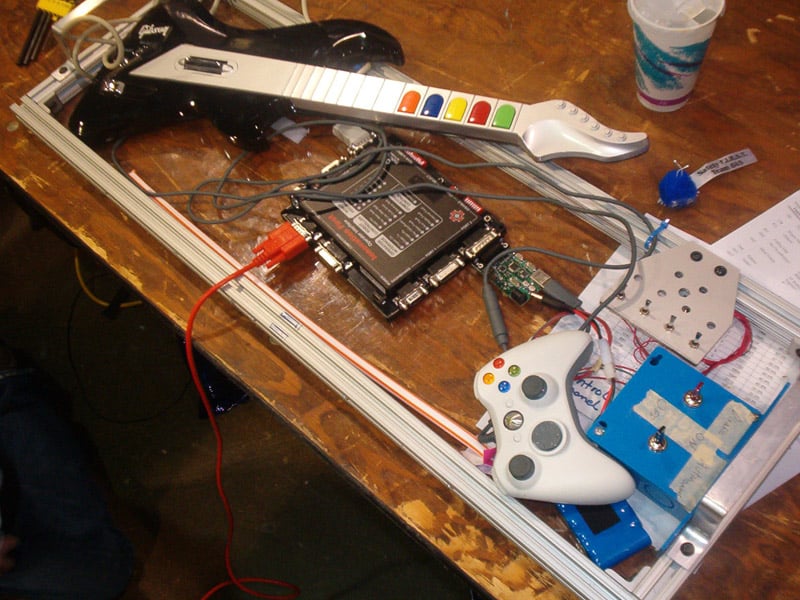 Team 1261’s (RoboLions) 2007 setup used the Xbox 360 controller for driving and the Guitar Hero controller for the manipulator, and it won them the Innovation Control award at the Peachtree Regional
Ryan_Albright March 19, 2007, 3:06pm #2

At the beginning of this season after some talk on here, I figured I would see a couple of Xbox controllers. Now a guitar from guitar hero is just awesome. Congratulations on something truly unique and glad to see you got an award for it.

that is sweet! does anyone know what the xbox controlleer if for.(presumebluly driving) and the guitar hero controller i have no clue, but that is sweet!

that is sweet! does anyone know what the xbox controlleer if for.(presumebluly driving) and the guitar hero controller i have no clue, but that is sweet!

For more details on this awesome control setup, see this post: http://www.chiefdelphi.com/forums/showpost.php?p=599364&postcount=5

Wow, I can see the MC’s having fun with that team right there:D

That thing looked and worked awesomely. You guys did awesome. Congrats.

that is sick dude!

Impressive! Congrats on winning the Innovation in Control Award!

that is sweet. I think that is one of the coolest controlls that you can use. But all I can ask is can you do a face melter, and is it still using the level controlls and the whammy bar?

If by face melter you mean the spring-mounted little piece that allows you to jerk the controller and get the “Star Power” mode in-game, then no. We’re also not using the whammy bar because it’s a resistor and not an analog output, so interfacing with it would be more difficult…but we wouldn’t have really had a use for it anyway. The 5 buttons on the neck were used for high/med/low positions and manual up/down, the strumming was used for a manual load/unload, and the Select button was a on/off toggle for our auto-load function.

Agh!! Team 1611 wanted to choose you when picking alliances!! But Forsyth Alliance beat us to it! You guys were…WOW…Amazing!
The guitar was so neat! Your robot was really well designed…It stinks that you guys couldnt make it up our ramp. =/
Other than that you guys did a really great job!
I cant wait to see you all next year!

I love the guitar hero idea. I bet it’s a lot of fun for the person using it behind the player station.