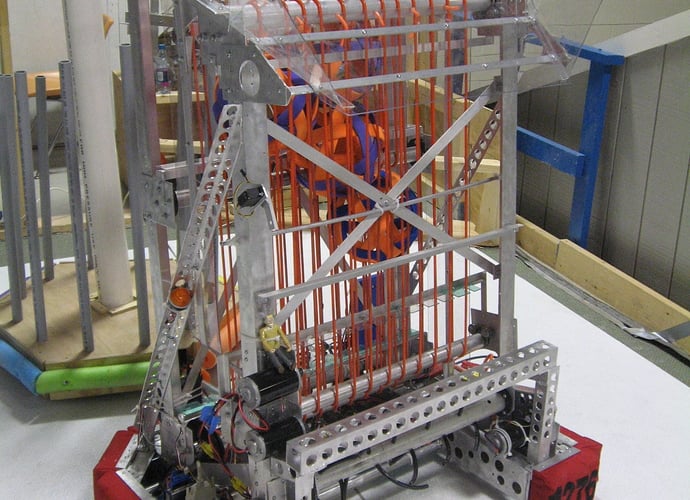 After six long weeks, here is our 2009 Robot. The concept grew from our six year struggle with hoppers. They always seem to jam at the most inconvenient time. So, we went with a single conveyor with no twists or turns where balls can jam up.

Any orbit ball that comes in under the crash bar is picked up by the beater, which whips it up into the conveyor. There is an IR sensor that detects when a ball is present, and turns on the conveyor long enough to bring the ball up. If the sensor fails to see the ball, their is a manual backup. Their is enough storage for at least 12 orbit balls, we could probably squeeze 15, but we don’t intend to. A bar across the top prevents the balls from leaving the track when we are collecting. To shoot, the bar is rotated away and the conveyor is turned on. They simply pop out the top and roll down. It’s fast (2.5 seconds with a full load) and accurate (9/10 or 10/10 make it into the goal). It’s also wicked fun to watch.

Up front, we have the MBC (Magic Ball Collector) which is used to gather Empty Cells. The robot drives by or slams into the Outpost, at which point the human drops the ball in, and the robot continues on its way. This way we can deliver Empty Cells without dumping however many moon rocks we have.

You can’t see it, but it’s a 3 wheel drive. The front two visible wheels are powered by Toughboxes with 1 CIM apiece. The back wheel rotates to steer, and is powered by a Fischer-Price. A nifty bit of coding makes it steer like a traditional two joystick skid steer, but it responds faster than if we had to wait for the wheels to slip.

I don’t like CD Media won’t let you post actual links. If I post to the description, these don’t show up in the thread. So, here’s the videos, and my apologies about the double post! :o

Looks Awesome!!! Thanks for posting, It is nice to see another great robot joining us at GSR. Best of luck! Stop by and say hi!