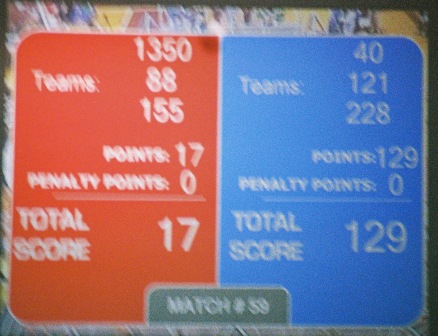 This is what happens when the 1st, 3rd, and 4th ranked teams all end up in one alliance! As far as I know, this was the second highest scoring match ever for the 2005 season.

was this the highscore of BattleCry?

congrats to the teams who got it also.

Well… There was this one practice match at the Denver Regional, with teams 118 and 233. Sadly, it was us and one other team that was up against them. It was very, very, very sad to watch. Even though it wasn’t official they managed to score about 200+ points. They ended up pairing up in finals along with them and one other team, (dang it I forgot :(). I got to talk to Dave (it was his first time at the regional) and he was very impressed by the matches that were going on, I think we had some of the highest scoring games happening at the regional.

wow that’s a really impressive score… congrats to those teams…

Y’all don’t know the half of it. The previous match my team (40) broke some gears in the gearbox on our left side. We got Checkmate to the pit as fast as possible and went right to work. However, our next match (the one in the pic) came up pretty quick, and we were crunched for time. The gears were finally replaced just as the teams for the match were being called out. I got behind the cart and literally ran through the pits to the staging area, arriving at the field just as the thumbs up was to be given. The MC was aweful suprised when instead of the thumbs up, he recieved a thunderous NO! from the entire alliance.

We forgot to hook up one of the motors on the left side, but our driver did very well regardless. Actually, I would have to say that this match was one of the best matches teamwork wise that I have seen since the Nationals. Congrats to 228 and 121, you guys sure did run well!

One thing that makes that even more impressive is none of the teams they were against are bad teams. Then aga 121 and 40 are a force on their own 228 just takes it to a whole new level.