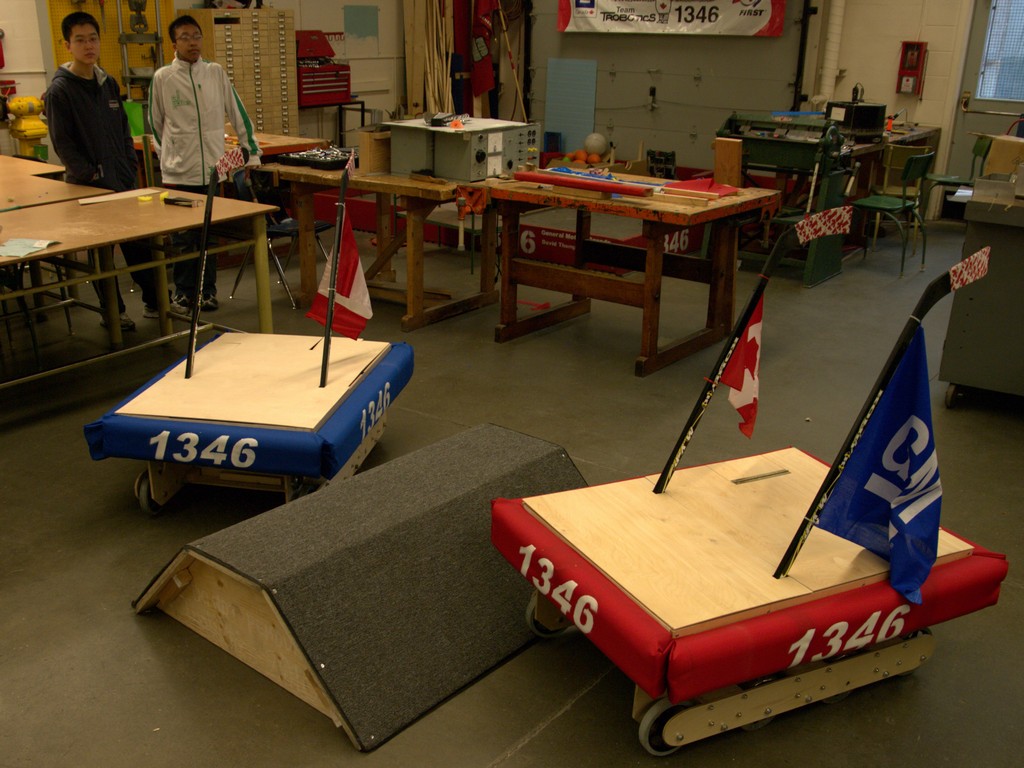 Our Seattle friends will be pleased to note the return of the hockey sticks for 2010.

In the off season we’ll be removing the hockey sticks and taking these things home to use for a coffee table that can actually deliver drinks for you. Or maybe a footrest that comes when it is called.

More seriously, however, 8wd, the two middle axles are 6"x1.5" IFI Traction wheels using roughtop tread, and the front and rear axles are 6" 2007/2008 AM kitbot wheels raised 1/4". The 14.88:1 toughbox (2 CIMs/side) is a direct drive to the third axle. No problem with the bump, and handling and accelleration like nothing we’ve ever built… including a mecanum drive. This thing might not have the top end speed of some robots, but it can come to a full stop, turn 90 degrees, and get back up to full speed faster than our mecanum robot could go from full forward to full sideways. 8wd has suddenly become my new favorite drive train. We’re going to do some pushing tests with the practice bot later on… but don’t plan to make defense a big part of our game. It’s more fun to score goals. (Just wish our Olympic men’s team had scored a couple more Sunday night…)

The entire robot is basically built out of one 5’x5’ sheet of 3/8" baltic birch plywood… and only a few of the parts were cut on our CNC router this year. The bed just isn’t big enough to do the sides, so this is largely hand-built.

The hockey sticks will support the robot signal light, camera, and perhaps a ball deflection mechanism… but probably not the flags as they could blow outside our volume limits. They also will prevent the robot from flipping on its top, and with our CoG as low as it is, the robot is self righting from (just about) any position it can be tipped or tilted to.

There are more details (including the mysterious lack of ball magnet and kicker) in the “witholding limit” photo.

See you in Seattle!

Awesome bots! Great job maximizing the resources you have to make something that should hopefully prove successful on field. You guys are in a similar boat to my team in a lot of ways. Hope that 8wd is growing on you!

Hope you put those hockey sticks to good use however you do. Good luck this year! (and if you can give me any tips on making your ball magnet work…)

Beautiful! It looks like you have a lot hidden under there. I have always loved your skills in building with wood. We look forward to seeing you in Seattle! Bring on the hockey sticks!

Now if someone would only build a US hockey-stick robot maybe the Canadians could get a rematch of the Olympics matchup.

Beautiful! It looks like you have a lot hidden under there. I have always loved your skills in building with wood. We look forward to seeing you in Seattle! Bring on the hockey sticks!

i was just about to say the same thing… great looking bots… which one is in the crate right now? good luck to you guys

It will be fun to have you guys on the field with us!!
Hopefully NOT against us with those kind of driving skills…
Skunkworks is always inspired by what our brothers and sisters from the North do every year!!

YES THE RETURN OF THE HOCKEY STICKS!!!

All the best … beastly machines you have there…

But have no fear… my prediction for the GOLD Is:

We made our spare moving arms out of hockey sticks. I just hope to not have to use them.

We don’t have to wait to see a Canada/USA Gold Medal match… the rivalry between the Canadian and American women’s teams is quite possibly the most intense rivalry in all of hockey at the moment and the game starts in about 75 minutes.

I’m hoping for a rematch on Sunday, too. Regardless of what happens however, any tournament where we get to lay a whupping on Russia is a good one.

Oh… right… this is a robot forum. Back to work on the ball magnet now, and thank goodness for HD streaming video.

The hockey stick roll cage is a sweet idea, but dont you lose the functionality of going under the tunnel? or was it never intended to go under? and does it go over?.. honestly from what i’ve seen, if a team goes over, it will most likely go over sideways. and i honestly think the CG is low enough on most bots to not roll easily if at all. but at the same time this is FIRST, we’ve defied physics before

any vid of rolling the bot over the hockey sticks?

OK, so another Canadian team in Vancouver knows how to use hockey sticks. Congrats.

OK, so another Canadian team in Vancouver knows how to use hockey sticks. Congrats.

Phew. That was close.

But the celebration going on in town right now is amazing. Wish we could people as excited about robots in this part of the world. Heck, wish we could get them 0.1% as excited.

Edit: Oh, yes… we’ve been back and forth over the bump several times with no problems, and have a practice robot and three weeks to refine our technique before the Seattle tournament. The sticks actually make it impossible for us to roll as our centre of gravity is just too low… unless we completely flip on to our top. With the sticks we can’t do that. An end-over-end flip, is a possible, but unlikely method of leaving us turtled… and if we need to prevent that we can just bolt a “roll bar” on to the front, so we can’t tip that way, either.

Should we want to go under the tunnel, the sticks remove with four bolts, but honestly, at this point the bump holds little fear for our 'bot.