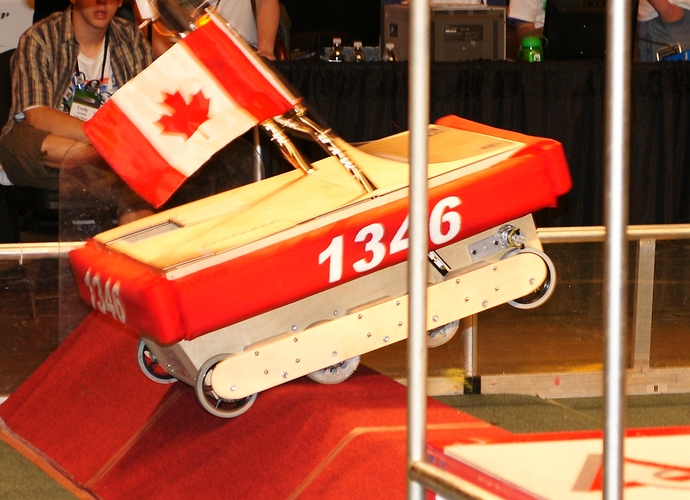 There are some great photos of 1251, 801 and 1902 “getting air” off the bump… this great shot of our machine taking off was snapped by one of the kind people from the FIRSTWA media crew at the MS Seattle Regional and posted to http://www.flickr.com/photos/firstwamediacrew

There’s no suspension on the machine, but the battery has about 1" of foam under it, and the control board has 1/4" or so, just to take the worst of the harshness out of the landings.

Yes, everything is baltic birch plywood… except for the hockey sticks, of course. The plywood handled every impact we could throw at it, and even though we smashed one of the AM wheels on the back one match, it never slowed us down (and took about three minutes to replace).

This is our seventh FRC drivetrain, and is the cheapest, easiest to build, toughest and torquiest we’ve ever put together. I used to swear by 6wd, but now I’m a solid 8 wheel convert!

I’ve been telling my team about your chassis from the first time I saw it.

I don’t know if wood specifically is a good choice for us (lumber is pricier here) but It’s definitely an inspiring chassis which proves complex tools are not necessary in order to achieve excellent results!

regarding the flags, are they connected rigidly to the robot? how do you keep them from blowing outside the robot and earning you a penalty?
(we are also thinking about planting a flag on our robot)

regarding the flags, are they connected rigidly to the robot? how do you keep them from blowing outside the robot and earning you a penalty?
(we are also thinking about planting a flag on our robot)

The flag is attached to a small flagpole (a piece of dowel, really) and then the pole is attached to the hockey stick with zip ties. The hockey sticks are located about 4" inside the frame perimeter, so when we are in our normal configuration we don’t come close to exceeding the perimeter. There would have been brief moments during competition when the flag ends went outside, however some of them would have been caused by climbing the bump, or when in contact with another robot. Both situations in which we felt the rules and Q&A allowed some judicial interpretation as to the definition of whether we incurred a penalty.

I shared the concern about the flag going beyond the frame perimeter, however, and was prepared to remove it after the practice rounds (or stretch it across to the other hockey stick so that it no longer waved), if required, and would have done so immediately and without complaint had there been the slightest concern expressed by an inspector, referee, or other team.

Normally we try to keep national insignia to a tasteful minimum on our shirts and robots, but will plead guilty to a bit of post-Olympic euphoria this year. Looking back, it would have been entirely appropriate to fly an American flag on the other hockey stick, as we certainly feel that Seattle is like a second home for us when it comes to robotics.

Glad you like the frame… we’re going to have to publish some drawings and instructions so that anyone with a table saw, jig saw, and drill press (or even a steady hand with a good hand drill) can put one of these together. Experienced teams could no doubt knock out one of these in minutes without further instruction, and no doubt improve on it a bit, but there are a few little tricks that we came across that might help out others.

Edit: To be perfectly honest, we did use a CNC router for mass producing the spacer blocks… but that could have been done equally well with a template and careful cutting… and it was also useful for precisely machinging a recess for press-fitting a bearing in to the outside panel to support the extended shaft from our AM toughbox. If you look above the third wheel from the front, you can see a couple of nuts on the inner chassis wall that support the toughbox. We geared it down with the optional 14.88:1 kit, as I am a big believer that torque beats speed 90% of the time, and direct drive is the best way to guarantee your chains will never fail!

Yay for shameless patrioticism! 1075 has been loudly and proudly bringing Canada to Kettering Kickoff and Brunswick Eruption since 2007. Being the lone Canadian team at both events every time we’ve gone, I understand it at BE, being in NJ (about 9 hours drive from Toronto), but KK is only 5 hours from Toronto, and less for those teams from points west.

Our robot/cart/cheering section at these events often involves our GIANT Canadian flag. (It’s big enough to drape over our 2009 robot)

That looks so good guys! Are you going to ATL?

That looks so good guys! Are you going to ATL?

As soon as we qualify.

I had the chance to go as a volunteer doing tech inspection a couple years ago, so I know how awesome it is, but I hate going to an event when we can’t afford to take the whole team along. That’s why we stopped going to GTR once Seattle became an option. I’m pretty sure that when we qualify we can leverage that into some extra sponsorship to get everyone out there… but until then I think the money and effort is better spent on building the students and the team, rather than the travel.

But it is fun to be “the Canadian team”, isn’t it? I always feel that we get an especially warm welcome because of it.