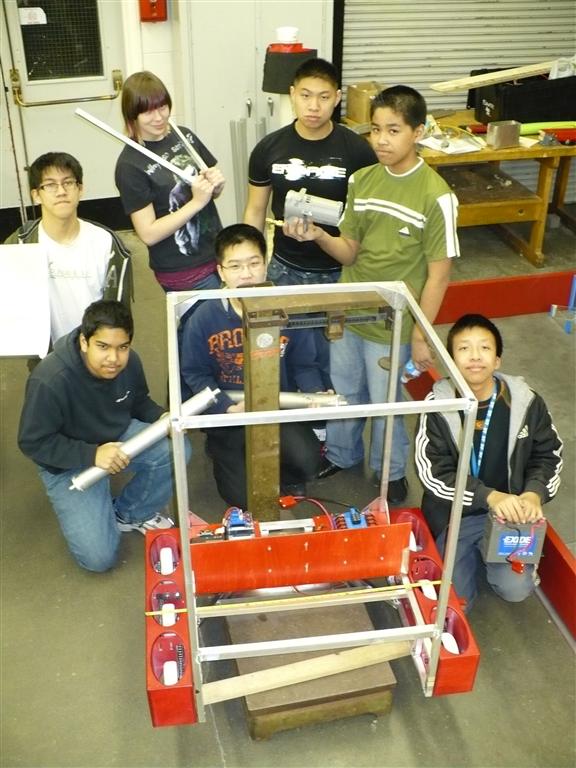 Our robot has a “modular” design. The red drive modules on the side are integrated units containing the wheels, chain tensioners, toughbox and CIM motor. They attach to the frame with five (or is it six?) 1/4" bolts. The control board is also modular and can be detached. The intake roller, dumper roller and round belting connecting the two is also modular and will slide down from the top.

The balls will be pressed between a round conveyor belting between the intake and dumper roller and a board with a high traction surface. The board will be pneumatically activated to pull back when gathering balls (so they only go part way up the conveyor) then pushed forward for dumping, putting the balls back in contact with the belts.

The drive modules, control module and (soon) conveyor module are all made of baltic birch, dyed red with aniline dye and lacquered.

Teams will note that we have the robot on a scale. (It weighs 65 pounds, 75 if the compressor and all those parts the students are holding are added in.) If you haven’t weighed your robot, or don’t know what it weighs… PLEASE WEIGH YOUR ROBOT (or at least its component parts) THIS WEEK and save yourselves some hassle. And yes, that is a tape measure across the top… measure it, too. And for that matter… post a photo here so you can find out what bumper rule you may have violated. (We should have a pretty easy time building legal bumpers for this one.)

Tonight was the first night we had the drive modules assembled and attached… the control board should be wired up in the next day or so. With luck we’ll be driving this week, while the conveyor module is being built.

Good luck to our fellow teams who are also waaaayyyy behind where they want to be at this point in time.

Finally, a picture that doesn’t make me feel bad about where we are at right now

On a more relevant note I like the color!

How easy is it to maintenance the drivetrain if needed?

Jason, we built your robot’s little brother for the VRC competition. OK, it’s actually a rolling chassis that was done as a technical demonstrator and proof of concept, and has not been mated to a game system, but it could be. It consists of a pair of power modules, each of which consists of two 4" wheels, two drive motors, and a 2-speed transmission which shifts with a servo. Either each module can have its own shifting servo, or a long drive shaft can run across the middle to the other side to shift both sides mechanically. The width of the robot is determined by the length of the rails chosen to connect the modules.

Link to a picture: http://www.vexforum.com/gallery/showimage.php?i=2741

EDITED: You know, if those drive modules are six inches wide and made of plywood, permanently mount noodles and viola! instant bumper legality!

Thanks for the kind comment on the drivetrain, Akash… mind you, that is about all there is to comment on, isn’t there? I figured it would be good to post a shot because we know that most teams are probably like us and counting on things coming together in a big way in the last couple weeks.

As for drive train maintenance… well… as soon as we get it driving and break something we’ll let you know! Actually chain tensioning is pretty easy (we slide a block up and down on the bulkheads), the front two wheels pop out by pulling a single bolt, so that is easy. The rear wheels is a bit tricky to pull what with the key and spacers and all, but we’ve had it apart and together a few times now and are getting better at it. The toughbox disassembles with just four bolts, and if we need to get serious we just drop the whole module off the side of the robot and work on it at the workbench. The idea, however, is that it should run pretty reliably… the rear wheel is direct drive from the Toughbox using the extra long shaft from AndyMark, supported by a bearing pressed in to the outside piece of 3/8" ply. (We’ve got a CNC router, so it is easy to machine a ten thou press fit.)

The top and bottom of the drive module are rabbeted and glued in place, with 1" gussets on the outside vertical corners. The two chain tensioners/bulkheads/carrying handles (they have handholds machined in to them) are dadoed in place between the wheels. The drive module has to be pretty sturdy as the bumpers will mount directly on to it using 1/4" bolts backed by fender washers to distribute the load.

The front wheel is raised 1/8 of an inch and the majority of the weight is near or behind the rear axle. We are trying to put our CoG as far back as possible so that the robot pivots about a point as close as possible to the trailer hitch. (Which should, hopefully, prevent us tipping over backwards.)

We’ve been having enough fun with the woodworking this year that one student insists he wants to build a cabinet to go overtop of the control board. If we come in seriously under weight, we may just go and build a custom tool cabinet to fit in to the unused space at the rear of the robot so that we will always have our wrenches and screwdrivers with us on the playing floor.

P.S. Rick… you posted while I was writing this… great to have others on Pacific Time… but I had problems with the link… is this the robot? http://www.vexforum.com/gallery/showimage.php?i=2741&catid=member&imageuser=2091 I assume so… it looks very cool and the 2 speed gearbox could be a big help in this years VEX game. In Courtneay last weekend speed and agility were really important in most matches, but the final, final match came down to a rather inglorious shove-fest.

I love the drivetrain. I really like the oval cutouts. We decided to go without the cutouts as the weight savings was pretty minimal in wood but looking back on it, I would put in the patterns just for looks. I am really excited to see many teams using wood this year as wood is really a perfect material for so many components. It is a whole lot easier to work with as well.

Very nice! The ball control feature with the moving board sounds ingenious…

We don’t have cutouts on our first chassis, but we’re building a “final” version that has 3" round holes above and outside the wood drive boxes, mainly to allow us to see what’s going on during drivetrain maintenance. I hope we never have to actually use them during competition

Keep up the good work, I hope to see some video of it in action by the beginning of the week