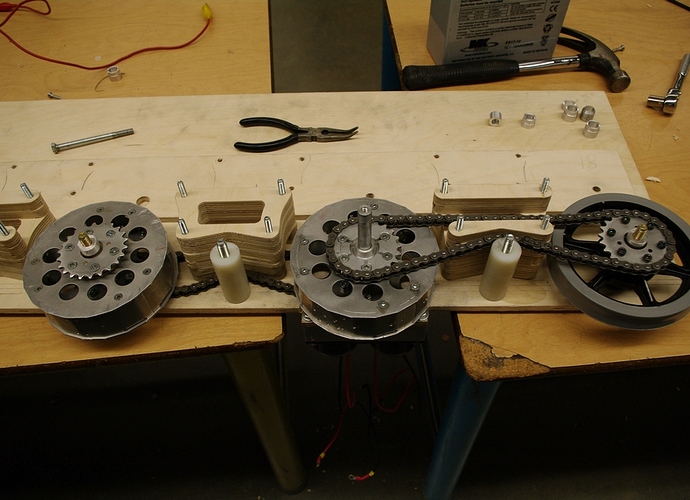 Earlier I posted a shot of our robot “getting air” off the bump and mentioned that we had built our simplest, most reliable, and best performing drivetrain to date.

We got lots of nice compliments for it, including a Judge’s award in Seattle. (They also liked our modular control box, containing all the electronics and pneumatic valves that could be easily swapped from machine to machine.)

I thought I’d post a photo to show just how easy it can be to build an 8wd drive train that can be thrown over the bumps and smashed into the ground without any problem.

Most of the plywood is 3/8" baltic birch, except for the spacers, which are 1/2". The AM toughbox, hanging in the gap between the two tables, has the extended output shaft directly driving the IFI/VexPro 6" traction wheel.

Chain tensioning is accomplished by turning down the nylon spacers until the chain fits “just right”.

The spacers, to keep the wheels centred on the axles, had to be turned to the correct length with a fair bit of precision, because there wasn’t much room between the chain and the sides of the robot.

The smaller piece of 3/8" plywood (resting between the wheels and pliers in this photo) flips over and bolts down over top of it, sealing it all up… and we’ll happily smash and dash with any aluminum or steel machine all day long.

This is the first time I’ve ever finished a season and said… “yeah… we’d do the drivetrain exactly the same next year if it fits the game”.

So here’s to all the other teams that did neat stuff with non-metals this year… looking forward to seeing more of it next year.

Did you end up gluing the spacers or any of the chassis members togethers?

How are the shafts mounted to the wood frame? I would think that if it was directly mounted, the holes for the shafts would expand due to the collisions of the bump and lead to vibration.

That is a beauty. You guys need to come back to GTR some time so I can admire your robot in person.

I also have been working on a plywood drive base, and it seems like you would know the answers to some of my questions. So 1) How do the delrin tensioners effect your drivetrain efficiency and 2) If you glue anything, what kind of glue/joining strategy do you use to ensure it can take reasonable amounts of high strain rate loading?

Thanks for the Engineering Inspiration,
Alex

On the tensioners, instead of turning them down until the the chain feels right, have you thought about drilling the hole off-center so you can adjust it? (http://www.chiefdelphi.com/media/photos/30068 see the green nylon tensioner in our drivetrain).

…and here I am, thinking that you guys had made wooden chains and wheels.

Very nice woodwork, nice design. I need to try something like that in the off season.

Chuckle… you know, Don… we had considered wooden wheels. Now that I think about it, it would have been trivial to cut them out on the CNC machine from a few layers of Baltic Birch and they could have handled the stress better than the poor AM kitbot wheel that we smashed.

We did think about doing the “cam” thing on the tensioners… but felt that we wouldn’t need to adjust the tension once we “got it right”. This design also allows the nylon tensioners to roll with the chain, as we use nyloc nuts on the bolts holding the tensioners in place and don’t do them up tight. I just went and looked at our practice robot, and one of the three tensioners was rotating with the chain. I suspect they all do when the tension ramps up a bit as we push, but haven’t stuck my head down there to find out. An added advantage is that we never have to worry about a tensioner coming loose (although we do need to put them together in the right place), and when it is time to relax the chain for changing a wheel, we just pull the bolt holding the tensioner and it drops right out.

Alex… you guys would be most welcome in Seattle, too, you know. We love the GTR and the teams back east… and are really excited about what will be going on in Ontario over the next five years… but three years out of four we got snow when we were out there! Snow belongs on the mountains! Come on out and enjoy the tulips and cherry blossoms!

Seriously, though, I don’t think the tensioners hurt our efficiency that much. I just went and tested one side of our practice robot’s drive train by lifting it up off the ground and hooking one CIM up to a battery and letting the other freewheel (with the leads safely insulated… which is easy to do on a wooden frame). The one CIM drew about 8A, which, from my experience is likely mostly being lost in the Toughbox. I think we managed to get our “good” drivetrain down to about 7 amps when freewheeling at full speed. Again… it might be a bit different under full load… but suffice it to say that we never had to get up to full load in a pushing match in Seattle… there were probably only four or five robots there that could have given us a challenge and we never got to go “head to head” in a pushing match with them.

The internal structure of the frame can be seen here. On the “real” robot, the 1x1 pieces of standard SPF 2x4 are screwed AND glued in place with standard “yellow” woodworking glue. The outer bumper frame, however, is just screwed in place, so we can remove it for maintenance or modifications if required. On our practice robot the plywood is just screwed in to the 1x1. Both robots handle the bumps just fine, although the “real” one is a wee bit stiffer. The only place where we suffered any damage was where a student forgot to pre-drill the hole prior to screwing in the #8x1" wood screws that held the frame together while the glue was drying. The screw acted as a wedge, splitting the 1x1, which was quickly solved with a bit of epoxy.

Marko… we thought the axle shafts would cause the holes to expand, too. Last year we did a similar mounting techniquefor the axles and used a double thickness of 3/8" ply for the mount points. It seemed to be overkill, so we went down to a single thickness this year. We checked the axles for play regularly, and everything has held solid. Keep in mind that the axle bolts are a fairly tight fit in there to begin with… I think if there had been even a little bit of “play” to begin with the impact loading would have caused the holes to expand… but no… it is still solid.

Ike… we didn’t glue the spacers together. We thought about it, but by the time we did up the nuts, it was apparent that they just were not coming apart or shifting past each other. This also made it easier to assemble and disassemble (believe me… we got good at it and found the shortcuts after a week or so of doing it once or twice every night). The holes in the spacers are a VERY snug fit on to the 1/4" bolts that hold it all together… although we did drill out some of the spacer holes to 17/64" to make things just a bit easier to piece together.

Other ideas for the future are… that we probably overbuilt this thing and could shave some weight by speedholing it a bit. I think if we matched the holes in the spacers right through the inner and outer wall, too, that it would look pretty cool. I’m not sure if I’d want to drop down to 1/4" ply, but maybe 5/16" would do okay.

We could also build a drive module out of ply, with the wheels and toughbox mounted like this, and then have some aluminum cross members just bolt on using the bolts that hold the spacers together. That would give us some nice welding points for a welded aluminum tube chassis (the stiffest, quickest and lightest way we have found to build a “tall” robot) and would mean that we could build the chassis in the metal shop and the drivetrain in the wood shop and then just bolt them together later on.

Thanks for the kind comments… we’ve got some Inventor drawings that I’ll get one of our students to post, and we’re hoping to get around to posting a whitepaper or at least some video of how it goes together in time for next season.

P.S. More photos at http://www.trobotics.ca/#Build%20Season%202010 and there’s some videoaround there, too.

Video of us going over the bumps in Seattle can be found by going to http://frcstream.com/play_match.php?event=16&match=%2012 presented and hosted courtesy of the Bellarmine Prep alumni of team 360.