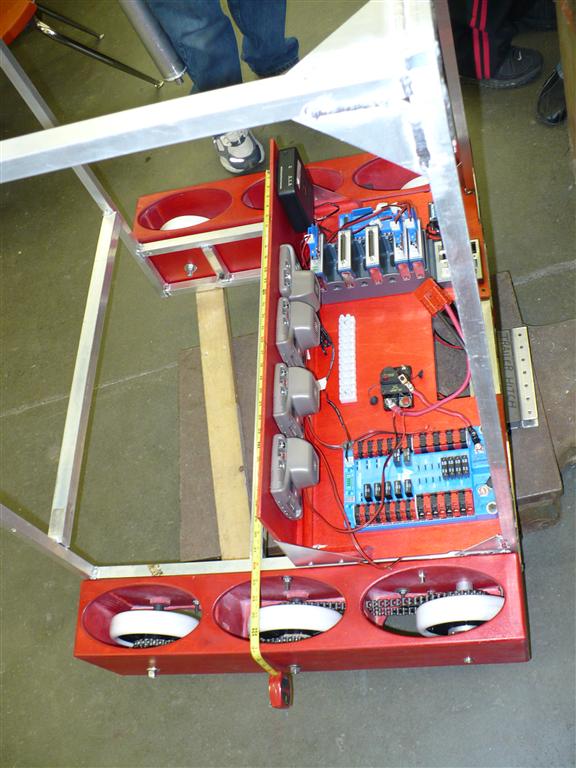 The robot from the side as of Feb. 04. We’re about a week behind where I’d like to be. I say that every year, but this year I’m thinking I mean it.

The design looks really clean. Neat feature to use oval holes for the wheels.

The ovals were cut out in one piece and the wood has been recycled for use as tethered mini-sumo robot control boards for my “Robotics and Flight 10” class. They were rather easy to cut out with a CNC router and offered the maximum access to the inside of the box with the minimum reduction in shear strength should the outside corner take a hit.

P.S. I hope the wiring will look just as clean once we actually have wiring!

Not sure how much more you have to do. But you can’t be that far behind.

Since you’ve mounted the electronics: about how much do they add to the weight? My team thinks they will weigh 20 lbs. Is that outrageous?

Our design is similar. The reason we went with a six wheel, dropped center design, is that most of the time you will be sitting on four wheels (the front or rear wheels are always off the ground) Since your wheels are very close together, you turn easier and faster. You can’t do this with only four wheels because you would fall over backward (or forwards)

Nice looking robot !!!
We look forward to playing robots with you guys!!

We are busy working on the swerve controls…

By the way, last night we weighed our control board and it weighed 18 lbs…but it was on an 8 lb chunk of plywood (which we won’t be using…) so it would appear to me that the control system (with 4 Jags) weighs in the neighborhood of 10 pounds wired…

This could be fun… well… actually it already is fun…

Good luck!!
We look forward to seeing your finished product on the field!!

I think our electronics board weighs about 20 lbs, it’s also a huge thick plywood box…sure is nice to work on, and so far we can afford the weight.

We’ll hopefully be able to answer the question about how well it turns before we ship it out, however the final determination of that will likely be based upon how well we can master traction control. Thanks to the modular design of the robot we can unbolt one of the drive modules and the control module and keep them back as part of our 40 pounds of robot that we don’t have to ship, and attempt to optimize traction control in the time between ship date and the Seattle regional. It may even be possible to keep both of the drive modules if we unbolt the CIMs and ship the CIMs, then just use a couple of spare CIMs for testing purposes. That depends on final weights and how much assembly we want to do on Thursday in Seattle.

As for the “why” part of the question, however, I will reference this thread http://www.chiefdelphi.com/forums/showthread.php?t=71238 and the white paper/spreadsheet referenced in it.

This robot is, actually, a four wheel drive robot… as most 6wd designs actually are. In our case the front two wheels are 1/8" off the ground. This means that the wheel base is effectively the distance between the two rear axles, or about 13". By reducing the wheel base, and maximizing the width between the wheels we are maximizing our turning torque by reducing the amount of scrubbing that will occurr during turns.

The two front wheels are there just to keep us from tipping forward and to help us get back up on the regolith from the carpet… if we run in to weight issues, we could probably get rid of the drive chain leading to them and, even, the front wheels themselves.