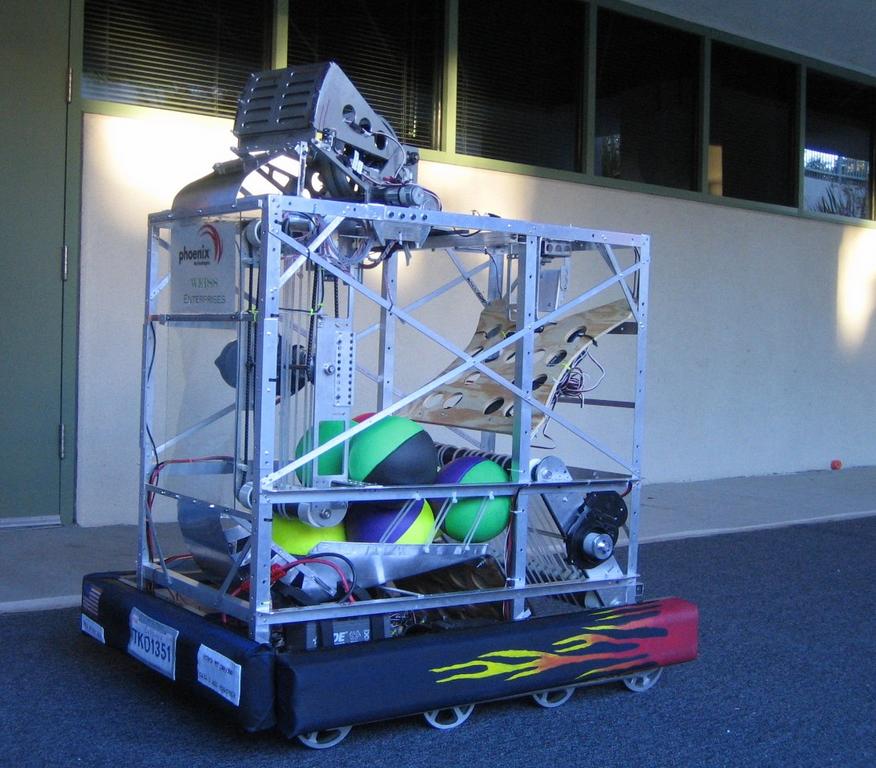 Heh, I like that tiny jungle of wires on the front. Cool flames too.

Is that a licence plate on the back?

do those flames help you go anyfaster ? How do 8 wheels work for you ?Great looking machine good luck !

How well does it turn?

does that cover(what is word) at the top of the robot used to aim the ball? that is one smokin hot bot…gotta love 8 wheels.

My, just add metal plating to the side, and the thing will look like a tank. Very well done.

And by the lack of holes on the frame, I take it you didn’t have weight problems, did you?

The turret on top gives us both elevation and azimuth control. You can’t see it from this angle, but the entire turret rotates about the axis perpendicular to the ground. The deflection plate (I think that’s what we’re calling it) rotates forward and back on the axis holding the wheels. The ball contact surface is telescoping. You can see the fixed plate sticking out of the bottom. There’s another plate behind it that goes with the moving part. The plate on top with slots is just structural. Elevation and angle are controled with globe motors. The wheel is powered by a big CIM, you can barely see it behind the elevation motor.

The drivetrain works nicely. The second wheel from the back is 0.25" lower than the others. Personally, I think it makes it rock a little too much.

The entire ball manipulation system is attached to the superstructure (the box frame). Early in the design phase, it was decided that the entire supersturucture (with ball manipulation system) would be removable for easier maintenance. I don’t think we were able to make that happen though. It’s still removable, but it’ll take awhile. The superstructure is made of 1x1x1/16 6061 angle and is pop rivetted together, so it weighs practically nothing. And no, it won’t break. The robot has already fallen on its back several times while coming down from the ramp.

The ball conveyors are ABS pipe with tubing as belts. The tube walking issue was fixed with the advent of Capture Rake Technology. You can see one of the capture rakes on the front bottom, right on top of the pipe. It’s a bar with rollers on it to hold the belts in place.

A few days before the end of build, we had a scare with the weight. Someone didn’t weigh the robot properly and we thought we were overweight. Most of that day was spent drilling holes and replacing steel parts with aluminum. After a reweighing, we discovered that we were underweight. The final number as of ship was 8lb under. That’ll go toward strategically adding weight to fix the tipping issue on the ramp. The 1x1 tubing on the front that’s acting as a front bumper is looking like a good place to fill with steel.

i love the bot guys! does the front wheel look different or is it just that it’s 1am? I do love the 8WD and i wonder where else i have seen that before. good luck on your comps and where you guys headed?

Were going to Silicon Valley and UC Davis. Should be fun!