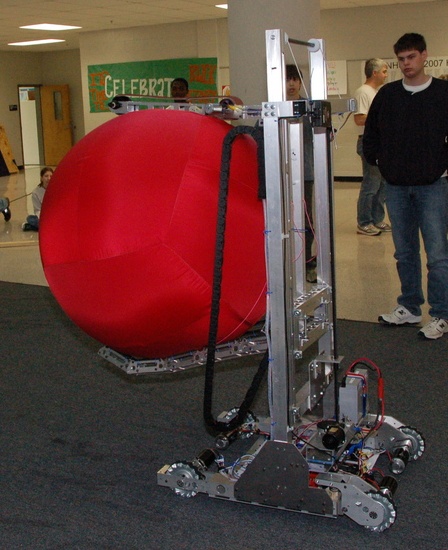 Nice! I am glad you found a use for the cable chain. (I wanted to put it on the bot just so kids wouldn’t keep getting distracted by it… :rolleyes:)

I have a quick question. Do you have any gear reduction on the CIM drive motors? If not, that must be a really fast bot.

At the time the picture was taken there were Banebots 12:1 planetary gearboxes, but they have since been switched to a 4:1. Unfortunately the torque loss with the low gear ratio is enough to make moving sideways from a stop difficult. However, if the robot is already moving it is still capable of changing to a sideways direction.
When I planned this drive train I wanted 6:1 gearboxes but Banebots only has 4:1 or 9:1 options. We made the decision to go for the speed despite the risk of losing maneuverability. It ended up being the right decision as our driver prefers to not go sideways anyway and the extra speed is nice.

P.S. I know Banebots has left a sour taste in many peoples’ mouths with the issues they had last year, but I recommend checking out their new line of gearboxes. They have made many improvements and they offer a fairly cheap and simple solution for gear reductions.