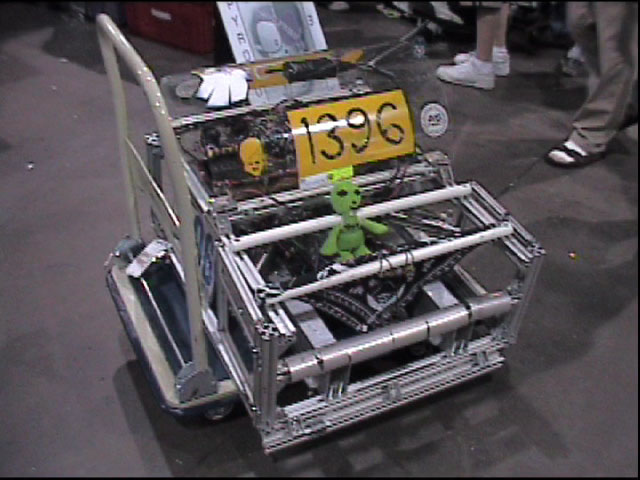 1396 arrived at Championship to find their robot had been accidentally shipped home instead by FIRST.
This is the robot they and neighboring teams put together in a few hours.

You guys were great. I had the pleasure of being up on stage with you guys for a match. Despite the problems you had with your bot the drivers, coach and human player were high spirited and fun to work with. Congrats on your Championship Judges award and hope to see you guys again next year.

The story is posted elsewhere, but I’ll repeat it here.

Team 1396 arrived on Thursday to an empty pit.
No crate!
They frantically began tracking down where their crate was. It had arrived in Atlanta, but through a paperwork mixup the robot had been re-shipped. The Team finally received a phone call late Thursday night from home telling them their robot had re-appeared on the school loading dock.

In the meantime, without wasting time waiting for the crate to be found the students proceeded to build a second robot. 1396 had brought Bosch intended to be used to rebuilt their arm and parts to rebuild their drivetrain. FIRST Spare Parts dumped victors, spikes, joysticks, compressor, pneumatics, and other parts needed to put a robot together. Surrounding teams came over all day Thursday, Friday, and Saturday contributing parts like the Robot Controller along with their expertise and labor to help 1396 get that robot up and running in time to compete on Friday.

They finished Archimedes in 33 place with a 4-3-0 record and received a Judges Award! Discovery Channel followed them around and did a story on them.

I’m proud of the way FIRST teams got together and helped get this team back on their feet :D, and I feel very [font=Verdana]privileged to know the members of Team 1396 who didn’t allow such a potential tragedy to conquer their spirit or defeat them. They simply rose to the challenge and did what had to be done, and in the process probably had the best time possible at Nationals![/font]

That really was a great job, you pulled it together and built robot after your’s was shipped home. I was really amazed at all the hardwork everyone put in to it and i was glad to see you guys out on the field!!

that is the coolest thing, A new first for FIRST

this is gonna be fuel for procrastinators

in fact, we could just ship the KOP and build it when we get there :ahh:

wow when it rained it poured for this team…we were right next to them in the pits. They were leaving for a match, took the robot off their table, took no more than two steps away when the entire table crashed to the floor…batteries, chargers, a SOLDERING IRON that was on still…it was pretty bad looking…gj guys you put in a lot of solid work.

1396 (Tottenville HS, SI) is a ROOKIE NYC team.
If it wasn’t for all the great FIRST teams helping at the Championship Pit,
it would have be a disaster and a horrific experience for these rookies.

From all the other NYC FIRST Teams, a big “THANK YOU” to all the teams who gave their time and parts to help 1396. All of you show exactly what FIRST is all about.

Congrats… Thats what it’s all about. Way to go

I saw this robot on Archimedes a few times, and it got better every time I saw it.

Any team that can get something running that fast deserves respect. And I bet if they had another day or two, they coulda been hanging!

I want to publicly post an apology from my team 237 for “beating” on their robot during a practice match on Thursday. In the alliance stations that first practice day, our driver wanted to try and block a team. Unfortunately they did not hear about this team’s plight and chose them to try and see if we could block them. This unfortunately led to a shoving match against the “one day” bot and had a few teams asking why we “beat” on them.

Again, we are sorry for this - my whole team in the stands were yelling at our drivers to stop, but they did not hear at first.

Sorry for any harm this may have caused the robot or the team who was so much down on their luck so to speak.

And thanks to this team, for it proves that scouting is never done… If we had gone against this team for a bio of the robot from a previous competition, then we would have been shocked on Friday and Saturday when we went against them…

I remember seeing this robot when i was on my way to the quaterfinals and thinking “that wasnt the same robot i saw them compete w/ at the NYC regional”. It wasnt till they won the judges award that i found out the story.
Congrats to everyone on 1396 and who ever may have helped them acomplish building “the one day bot”.

Also congrats on winning Rookie Allstar at NYC, and Judges award at Nats. Good luck in the future

One of my fondest memories from this year was helping 507 go from a chassis that wasn’t moving to a functioning robot. Still…that pales in comparison to this.

Congrats to 1396 - it sounds like you managed to pull off a great thing.

awesome job 1396, it is truly amazing that u guys built a robot in one day
congrats on winning the award
hopefully next year this wont happen again, but u did a great job this year

When the finals were starting and it was said that Archemedies was the only division with a bot that was built in one day, my teammate turned to me and said “Jee, even WE don’t procrastinate THAT bad.”

When the told the story of what actaully happened when presenting hte judges award, the only thing in my head was “…wow. Holy crap. Wow.”

Though, if anyone could do it, it’d be a FIRST team.

Congrats again. I’m most impressed at how you didn’t get depressed and upset, you sprang to action and built a competitive bot on Thursday.

so what does the 10hr bot do? I think I see mechanisms for ball collecting but I am not sure.

That’s a story that we are going to keep hearing, great job.

LOL. Déjà Vu!
You may not remember (or may not have being around) in 2002 at the NYC Regional at Columbia University venue on Thursday-
Team 713 (Rice HS) had no robot. The only thing in the crate was a naked robot frame. When I open it, I was in shock. The Regional director told me that it was hopeless and to go help someone else.
Team713 already gave up the day before, because on Wed. volunteer dinner, the whole team showed up to volunteer because they said they were not planning to compete since they didn’t have a working robot.

BUT…On Thursday, several volunteers, teams and I built a working robot in 6 hours with no end-affecter. It was a true FIRST experience.
I remember begging many teams for spare parts. We also found a construction garbage container just out the school (a gold mine to any FIRSTer!!!) and jumped right in looking for wood, electrical boxes and metal!

One of the team that help tremendously WAS 237 Watertown, 522 Mckee and 334 Bklyn Tech and seversal other team. (was that you lecturing the other team?!) I remember stopping at 5pm when the robot was finally moving but your team 237 just kept working on an end-affecter and just wouldn’t give up. They kept working on it the next day until team 713’s first game. 713 won the Best Play Award for 2002 NYC Regional.
You guys rock.

A big thank you is in order as well as a large amount of respect.

I have never seen a robot get built in 10hrs. but I am upset that I was unable to see it all happen.

This was a big comeback for that team.

Some Info about 1396 The PyRobots.

This Team is located in Staten Island NY at Tottenville HS. This HS is widely known for its Sports athletics and is constantly in SI local newspapers. This HS is also one of the better schools on SI. Having a new robotics team that has shown its colors the first year involved with FIRST will only make the HS reputation better and I would like to see this Team back for the 2005 season.

T. 1396 has definitely earned all of their awards this year and Good Luck in the 2005 Season.

A Big Thank you goes to all the teams and the Spare Parts people who have helped to get 1396 on its feet.

What happened to this 10hr robot. Does 1396 get to keep it or did they have to return all the parts ponders?

I’d imagine that the electronics were returned, but I guess most of the stuff can’t be returned in a good fashion…FIRST games tend to knock the stuffings out of parts, even with a good chassis.

Anyone got info on the robot 1396 was SUPPOSED to have in Atlanta? You know, the one with the six weeks and all that.

This just proves what Dean talks about every year. Deadlines, Not enough time and resources to do what you have to. And the Gracious Professionalism that makes things just happen. To steal a line from a shoe company, Just Do It!!!

This is what FIRST represents. This definately needs to be treasured in some form.

I would like to start a new FIRST tradition and nominate Team 1396’s Championship Event Robot into the FIRST hall of fame as an Honorary Mention.