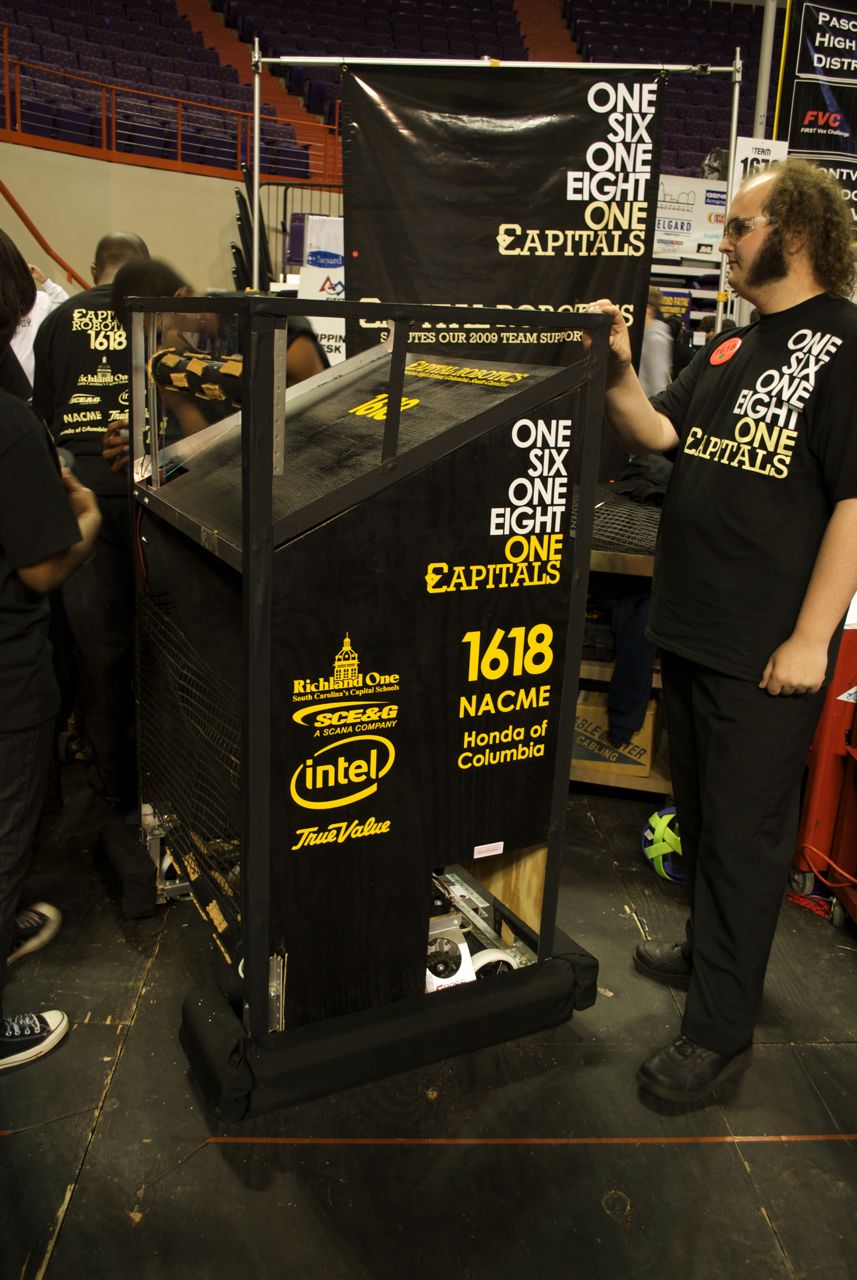 This is our robot, The Blackout, at Palmetto. It’s the first robot in team history to have a working manipulator, although we were still chasing bugs most of the weekend. Also visible are our shirt and banner. I’m a sucker for consistency.
gorrilla January 1, 2019, 1:04am #2

I spy a trap-door?

I spy a trap-door?

In theory, at least, we had a robot that could function as both a human-loaded dumper and a floor-sweeper with the ability to take an empty cell directly from the outpost hole. (It’s hard to see, but the netting stops just below the right height.) The hole in the side of the robot facing the camera was merely for access to the main breaker.

In practice, we had some issues. Our lower roller detached in some later matches due to a design flaw that none of us caught–the entire roller would simply slide off the BaneBots shaft because there was nothing stopping it from moving axially. We also had a couple of control quirks on the rollers–in at least one match, our upper roller wouldn’t run no matter what. (My exact instructions to our operator were “Start mashing buttons!”)

For all the issues, this is the first Capital Robotics machine that actually did what we set out for it to do. And, coincidentally, it’s the first one not to be named for some practice day calamity. Their season is done, but I’m hoping that The Blackout will be able to make at least one appearance somewhere in the off-season with a little more testing and tuning (and, as the style nit-picker, with the back of our back panel–still showing remnants of its duty as a wall of our 2008 crate–painted properly. ;))

where do teh balls that you pick up go?

For the dumper, yes.

where do teh balls that you pick up go?
Into the bottom of the robot, of course!

Over four seasons, 1618 has had four robots–the unnamed 2005 and 2006 robots, Uppercut (2007), and Speedy Debris (2008). Of them all, the most effective manipulator was 2005’s–three screws to keep a tetra from sliding off the back of the rolling base as they drove to a goal and slammed on the brakes. Result? A tetra in the bottom of a goal. 2006’s cannon had hopper issues, Uppercut’s arm suffered from a lack of gripper (and excess of speed), and Speedy Debris plain ran out of time for getting a trackball launcher (though it did meet some success as a lapper in Chesapeake).

This season, barring some really odd strategy of play (see also: Tumbleweed), I was on some self-imposed pressure to make sure our manipulator actually worked. As the days went by with other issues, the whiteboard-sketched vision kept getting simplified and simplified to this–and it worked. All told, I think it could’ve been a contender with a little more practice and refinement. But that’s what the off-season is for, yes?

I also love the look/theme of your robot! Your logo/shirts are so simple, yet so awesome!