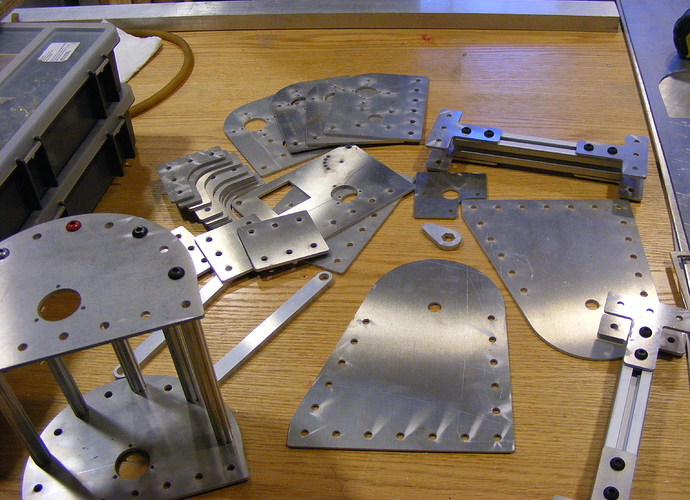 I decided to release this picture as a teaser for Team 1648’s current robot build. Sunny G and I both cut all of these parts using the Georgia Tech invention studio’s waterjet. This robot may end up being the most custom machined robot I’ve worked on in my time in FRC. See if you can tell what some of these parts are for!
wilsonmw04 January 22, 2014, 8:59pm #2

I agree with gussets, some kind of pivot, looks like a custom gearbox of sort and possibly a housing for a flywheel on a wheeled shooter?

I will give this a guess, the two big identical pieces in the middle of the picture appear to be an arm pivot so I think that is for your catapult. The pieces at the very top appear to be a smaller version of the pivot so maybe that is for the pivots for your pick up/intake. I think the gusset for your 8020 have been already noticed. I see a small cam with a hex hole so I assume that is what you are using to reload. I think the part in the bottom left has some motor mounts so that is where your cam might be going. Also that part with the rectangular hole is … a gearbox, maybe?

The assembly on the lower left look like it has bearing holes (because it looks like there’s a retaining screw three point pattern next to the large holes). Maybe a really wide wheel for a high velocity wheeled shooter?

They look like very nice parts. I can’t wait to see the finished product.

I believe they are Stanley. I think this the HD page for the boxes.

I believe they are Stanley. I think this the HD page for the boxes.

Doesn’t look the same-- notice the grey stripe a little bit in, which the boxes you posted don’t have.

That being said, we have a few of the ones you posted, and they do their jobs nicely.

Are you asking for what model those parts organizers are? If so, those are Stanley workforce tool box organizers (17 compartment). We use those to store our 8020 hardware.

Some guesses are correct, some are close, and some are quite a bit off. Keep the guesses coming, and we might release another teaser soon!