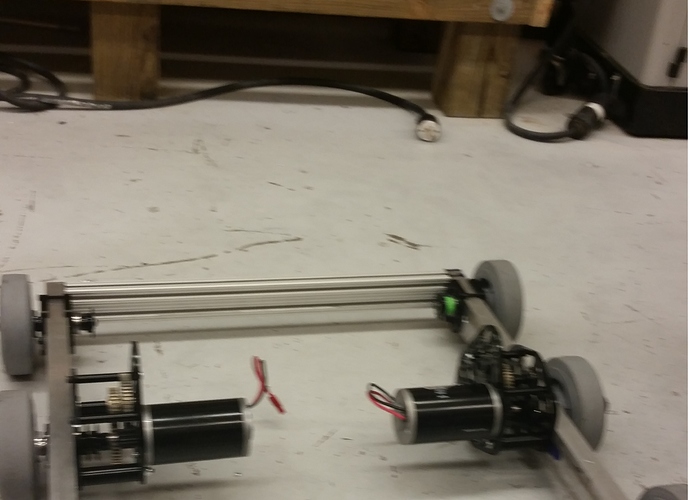 sorry if i’m confusing anybody, I already posted a description in a specific area of the forum, but I wanted the picture to be showcased.

Basically this is:
-six wheel drive
-chain driven, w/o a master link
-single speed, in the future it’ll be a shifter
-4 in colson’s
-2x1 1/8th inch box for motor mount sides
-80/20 for the adjacent sides
-West Cost Productions (WCP)
what do you think?

Why only 2 CIMs? What is it being used for?

2 cim drive is very weak. Try tacking on another 2 cims at least.
Apart from that, it looks very robust. The 8020 should lower the COG and provide easy mounting of manipulators.Adding a bellypan would be nice for electronics.
What size chain? #25 or #35? How are you tensioning it?

right now were only using to to try and get used to a 6 wheel drive. Using 4 cims or even 6 isnt necessary for just a rolling chassis. We can add another 2 cims or even 4 cims if we need to, I’m sure we will once we drive with 2 for awhile. If we were making a competition bot, then we would absolutely use 4+.

2 cim drive is very weak. Try tacking on another 2 cims at least.
Apart from that, it looks very robust. The 8020 should lower the COG and provide easy mounting of manipulators.Adding a bellypan would be nice for electronics.
What size chain? #25 or #35? How are you tensioning it?

Electronics will be on non-structural honeycombed fiberglass that’s actually re-purposed from 2010-ish. It’s a board that’s seen use every year as a electronics training board. It’s even a 7-slot cRIO.

I didn’t know they made 7-slot cRIOs…

These sides play an important role on a typical WCD chassis-- they are the major contributor to the frame’s torsional stiffness. So with that in mind, why do you suppose you typically see a lot of 2"x1" tube here, as opposed to 80/20?

Very nice! Using 8020 for the cross bars is an interesting idea. It might be slightly heavier than a 1x2 tube, but it would be much faster to fabricate than the tube and bracket method we use (from the team 221 superlight chassis). It eliminates 2 fabricated parts and allows the use of 1/4-20 hardware rather than #10 hardware at the corners.

To spark some ideas, check out the video of the presentation I gave on the evolution of the Triple Helix west coast style drive trains. Any chance you will have your drive train at the FRC workshops in Richmond?

Using 8020 for the cross bars is an interesting idea.

One question, does the use of the vex bearing plates allow the chains to be moved inside the side rails?

Any chance you will have your drive train at the FRC workshops in Richmond?

The 80/20 was an accidental “innovation”. We had plates made for riveting, then found out we used all of the rivets on something else, and then we lost one of the plates. So rather than delay another session, Stephen and I came up with the idea for the 80/20 while looking through our stashes of metal tubing. It won’t make the cut for a production robot (80/20 can’t be powder-coated) but for a prototype it’s pretty nice.

The VEX bearing plates are not counter-sunk, so the flanges are completely on the outside of the plate. Since there is 1/4" worth of bearing plate on the outside of the tube, this means there is a nice round 1" of axle between the live bearings inside the tube. If you can fix 2 #25 chain runs inside that (subtract the walls, of course) then there’s nothing stopping it.

Edit – ooh, just thought about it - you’d have to 'nix the WCP bearing block on the outside of the direct-drive gearbox in order to run chain in the tube. This means you’re responsible for your own alignment of the gearbox to the frame rail. There are 3 major reasons why I really like the WCP & VEX block combination, and this natural alignment is one of them.

I and my team are pre-occupied with a 48 team FLL tournament the Saturday of the Richmond workshops. I’ll be out of town the Saturday of the 1418 workshops. I actually wanted to present a lecture on drive trains and over the summer designed the schedule for this prototype to be ready in time for the workshops. Then we got our FLL dates :ahh:. I’d do it if I weren’t head judge or head ref.