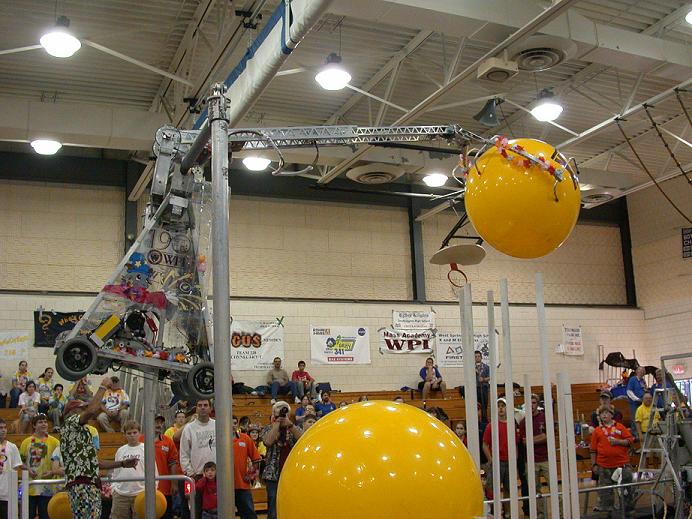 Yeah… that was a cool trick.

Did 190 ever do that in a competition?

(btw, the trick was to take the 2X ball from one goal and transfer to the other goal on the opposite side of the field)
More pics HERE and HERE

Although that is exactly what our robot was designed to do, we never ended up doing it in competition. Typically, by the time someone would put the ball on the goal, we had just enough time to block them from scoring, not let them drop and then transfer. We almost had it once at the Canada Off-season where our operator picked the ball off the floor in front of us (while hanging) then brought it all the way over, but we just didn’t have enough time to complete the move.

And just for interest’s sake, if anyone has any in it… it would make sense that people would place big balls late in the match, especially if they know you can defend, so the truth is we figured that and that’s not why the arm is so capable. Our original autonomous strategy was to grab the big ball in autonomous as we were beginning to hang and place it on the opponent’s goal ahead of us before the 15 seconds was out and HPs could begin shooting for goal-tending penalties. We figured we could easily keep that ball covering their goal and blocking points because anytime the opponents touched it to remove the ball, we could grab on and keep it there (since when a robot is touching/holding the ball it’s considered an extension of their robot and therefore the ball would become an extension of both our robots and then there could be no penalty for goal-tending). We figured then in the last 15 seconds or so we could grab the ball and dump it on our goal if we needed the extra points to win.

Unfortunately 15 seconds seems a lot longer when you do the math than how fast the robot can really do it… plus, without a full size field to simulate on, getting an autonomous hang was great feat enough for our awesome controls/programming group!

The quarter-finals of the Curie Division featured 190 defending the cap against 175. Although 190 didn’t advance, this was one of the most exciting games of “cat and mouse” I’ve ever seen in elimination rounds. I suggest you visit:
http://www.soap108.com/2004/movies/cur/index.cfm
and download cur_qf2m1 , cur_qf2m2 , and cur_qf2m3

All three matches start with 190 hanging in autonomous and the last 30 seconds of each match features Buzz trying to cap and Gompei defending against it … the camera angle in m2 is too tight, but follow the announcer and you can figure out what transpired.

Anyone out there a driver in these matches? I can only imagine how exciting it must have been on the field.

I designed a robot to do what I called the kill mode (stuff both opposing goals in auton), but it was too complicated to build. However, before this, I saw no robot doing the “kill [graciously professionally] mode”, and I think it is super-awesome that it happened. Kudos to 190.

yeah, the only way to stop something like that is to have Chomp-Chomp!

in all seriousness, amazing job pulling off that stunt.
:ahh:

…major revival. Cool balancing act though. I always wanted to see that game in action.

…wow almost 5 years. i have an autonomous video of this robot falling over another robot and pulling itself up. pretty amazing

…wow almost 5 years. i have an autonomous video of this robot falling over another robot and pulling itself up. pretty amazing

I can go dig up some threads where the autonomous is mentioned. I’ve heard some awesome stories from our alumni about Curie that year. 11+190+179 is apparently awesome.

Already been done, and posted on CD in another thread discussing a more recent picture of an '04 robot…

Thanks guys and that video is pretty SICK.

Thanks for the video link Eric. Haha I was driver of 237 from 2004-2006, and I was the driver during that match. Haha. I remember that play as one of the coolest plays that I was ever a part of while actively competing in FIRST. Even though we were on the bad end of that play, it was still hilarious to watch unfold.

Anyone out there a driver in these matches? I can only imagine how exciting it must have been on the field.

Those matches were probably the most exciting I have participated in, while being involved in FIRST. Truly impressive machines (hanging in autonomous?!) and 2 very determined alliances. It seemed as though whoever would emerge from that quarterfinal was almost a lock to make it to einstein. Buzz got the better of us in the end, but they were still great matches.