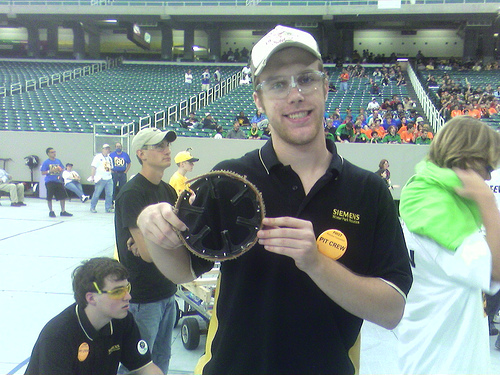 StudManDan holding their skyway wheel just before the final match on archimedes.

that thing made for a nice piece of jewelery.

There has to be a story behind this one.

… but I am going to make these wheels stronger. Be back with these wheels in about 8 months (next build season).

Yeah this happend at quite possibly the worst time possible. As you can see by my pit crew tag lol. During semifinals on Archimedes while playing some defense we somehow broke 2 spokes on our wheel.

When we came off the field we were astonished but it looked as if it would still work. So in semifinal #2 we completely lost the other 3 spokes off the hub. Stripped completely off.

Andy Mark make their transmissions so well that the wheels was just begging for mercy.

Heh If teams were wondering why were weren’t flying around the field playing killer defense after that this is why. Running 2 wheels on one side and 3 on the other took a toll on our motors, we were still able to run autonomous and play some good defense the first match, but by match # 3 in the finals the robot was toast.

We had a replacement wheel but didn’t have quite enough time to fix it during the eliminations.

I sure as heck can say colson, I can say a lot of things lol… 1902 just has had some of the worst luck with wheels this season, first we break wheels in Florida Finals, Now Archimedes finals ( WITH A DIFFERENT SET OF WHEELS!! ) ahhh heh

I believe we are up to 4 of those right now, as well as another 3 or 4 with only a couple of spokes cracked. We are also using Andy Mark transmissions. A special thanks to team 40 for donating 2 years worth of skyway wheels too us (all of which are now broken).

Attached is a picture of one of the ones we broke in Boston while playing Defense against 121, we gave it to them as a gift. 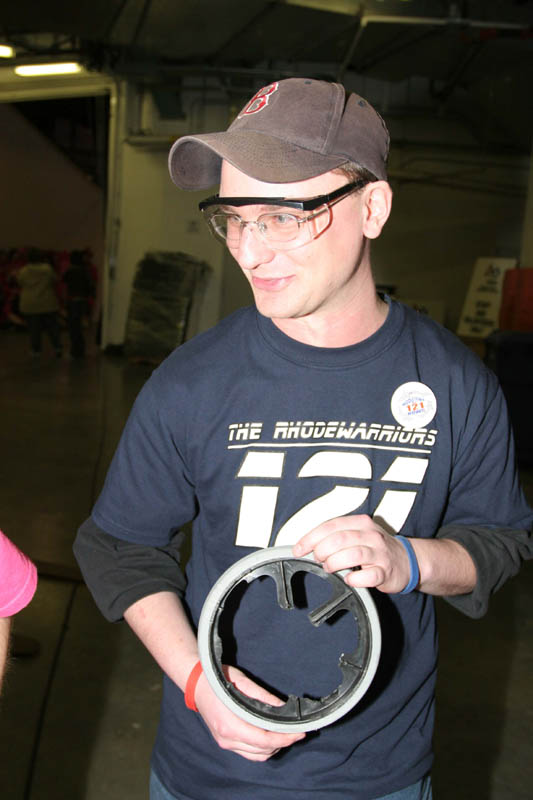 And, as a side note, I can see myself in the stands.

Yea, just bad luck. Finals had really aggressive matches, so it was no wonder that they shredded. Recommendation for next year: stronger wheels in kit.

:eek: did i do that lol sorry about that man u guys still put up a good fight

I think I have found the common link between you breaking your wheels and us breaking ours, we broke one wheel when teamed up with 233 in our last qualifying match then broke a couple of spokes when we were teamed up with them in eliminations. My conclusion, sky way wheels don’t hold up in pink light, thus the reflections off 233’s shirts caused the spokes to weaken.

(more likely it is the fact that we both mixed wheels (sky way and non sky way and then put used andy marks resulting in awesome amounts of tourque, what wheels did you use other than those, all the pictures on CD look like you used IFI tractions.

Well our robot has been through three stages all due to wheels.

We started all IFI… that uhh well didn’t work out… see other posts.

We then converted to IFI/Skyway purely kit version that worked better until the we dented the ifi wheels and they went kaboom.

We then converted to all Skyway high traction conversion that a bunch of people had steered us towards. We went through all of Houston, and all of atlanta withouth throwing a single chain or having any problems at all until in the semi finals on Archimedes Oink Oink KABOOOM.