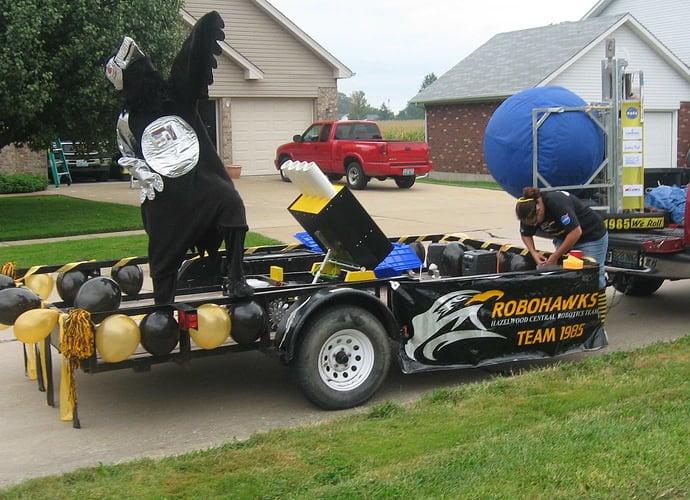 This is our new t-shirt launcher bot that we built this summer, mostly from spare parts. We unveiled it at the homecoming parade. Launched about 70 t-shirts, and only two got stuck in trees along the parade route!
Qbranch December 31, 2018, 11:45pm #2

Oh my gosh… it’s the bird/robot hybrid that was on the field at boilermaker! :ahh:

That is sick, how/what/too many questions to ask. How did you make, what is it made of, and how far does this bad boy shoot. This is a really cool launcher. Major props guys.

How much psi and how big are the tanks?

We have been operating between 30 and 80 psi, depending upon where we want to get the t-shirts. If we leave the rubberband around the tshirt, we can get them launched over the top of the bleachers in the football stands. On the other hand, we lower the pressure way down for the parade and loaded the tshirts with some candy and took the rubber band off so that the candy would come out the tshirt wouldn’t hurt anyone close by.

Used sprinker valves for each of the launchers and each has it’s own storage tank. Because we only used one compressor, it takes a couple of minutes to charge all four tanks fully, but that is okay, because we need to load tshirts during that time.

I think I should come ‘home’ for a visit during your next Homecoming parade. This sounds like a lot of fun! I want some of that candy! Oh, and a t-shirt, too.