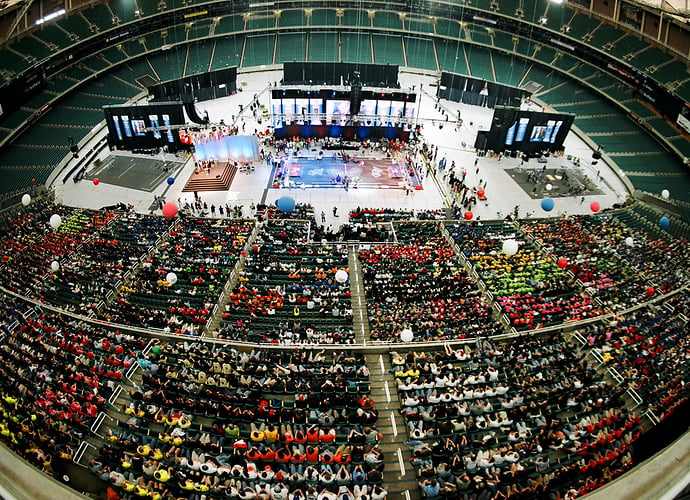 I thought this picture was really neat; perfect for one of those FIRST posters that keep popping up here recently…

Now THAT is cool!

It looks like the finals are on Einstein, and most of the other fields are almost done being broken down.

Now THAT is cool!

It looks like the finals are on Einstein, and most of the other fields are almost done being broken down.

Neato. I love those lenses becuse you see everything…Even though ti warped you still get the whole First effect

It’s a really cool picture. I did you take it with the actual lens or photo shop?

Wow thats an awesome picture, may even be my new background

Naw. Thunderchickens were over on the right side, just in front of what seems to be Pink. I think MOE is on the far left, out by Galileo.

Its not really warped, its just that the correct viewing distance is about 2" from your screen!

Posters? I have no idea what you’re talking about!

Haha I’ll have to make one out of this a bit later.

Can you say “sneaking past security”?

I wanted sooooooo badly to get a shot like this but security stopped me every time!

Thanks everyone for the comments!

To assist in locating teams I have uploaded the original scan (yes, we do still use film occasionally

Our photo gallery is currently being updated with pictures from championships, but there are some more overhead shots and some cool shots from the field (not only our team in the photos - be sure to check out page 2). The gallery can be found here.

Can you say “sneaking past security”?

I wanted sooooooo badly to get a shot like this but security stopped me every time!

That is what the media pass is for…

this shot makes for an emotional one.

where this shot is taken from also shows the tier, I think, that is filled to the brim with teams and supporters who did the wave - one wave after another during our period of waiting - I was below watching -

Wow Tim, that is a great picture! Thanks for hosting the fullsize image, this is going into my desktop image rotation immediately!

I got a lot of shots from all around the third floor (after ruunning from the security guards) and I’ll see if I can get the posted soon.

That is what the media pass is for…

I had a media pass! And a loaded photo vest! And two bags on my shoulders! And TWO SLRs w/external flashes around my neck!

Well, at least somebody got the shot. Once again, I’m extremely jealous.

I spy with my x-ray vision enhanced eye Team 25 somewhere behind Wildstang.

oh look my team looks like little ants taking down the Curie playing field. maybe after zooming in tons of times i might catch a glimpse of my pigtails. lol

the original is very cool. Would make a great 2000 piece jigsaw puzzel!

What film did you use? (film speed?)