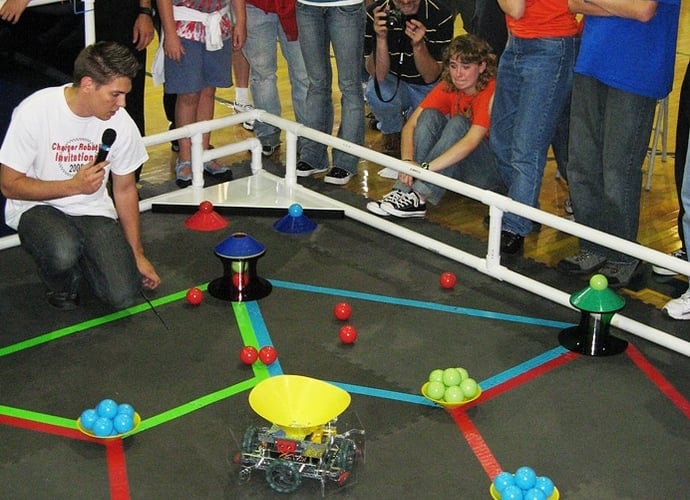 Close up view of some of th game elements for the 2008 MVP Challenge Conefusion. The Shy-Goal 5000, in the middle, is a completely autonomous goal that runs away from other robots.
pacoliketaco September 14, 2008, 7:50pm #2

wow, the addition of a fully autonomous scoring platform is genius. if i knew who thought of it, i would give them an award for innovation.

It was an idea that just came out of nowhere at our post competition dinner last year. We’ve yet to see how it reacts to 6 robots, but just playing around with it seems like it will be pretty neat. Its setup with four bumper switches (one on each corner, but centered on two sides) and two ultrasonic sensors. The bumpers have larger bumpers in front of them and cause the goal to spin - if two on one side are pushed at the same time, it moves straight away from the tripped sensors. The ultrasonics just produce a straight motion - however if inputs are combined, the goal will react to all of them and it is possible to cancel other actions out. There is a built in decay on each input, thus making the combinations possible.

We’re really excited to see how this works. I’ll be sure to post the results! Thanks for the compliments, and I will pass them on to the others involved.