pic: 2011 VA Regional: Alas, no achievement for this 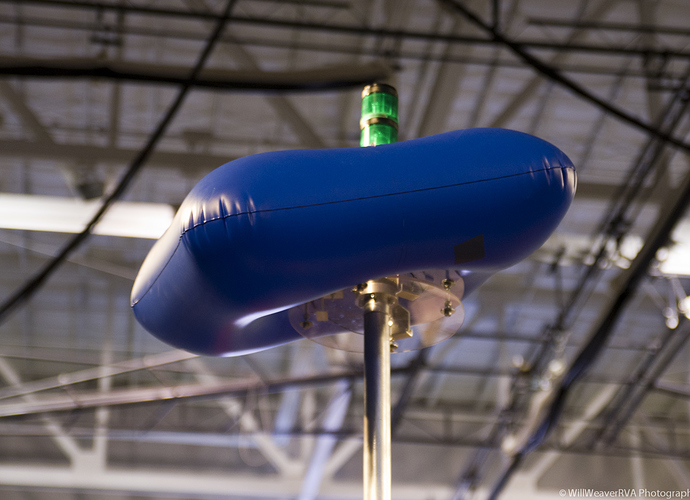 Someone from 1829 managed to get one of the logo pieces stuck on top of one of the poles! It was funny and the team member was a great sport about it, but it took a while to get this down - we needed a ladder.
twetherbee January 1, 2019, 4:45am #2

I saw this happen in the VA regional as well. I was wondering why the alliance didn’t receive a Red card for it? Did they ring their own tower?

At the San Diego Regional in QF Match 1, 254’s human player did the same thing (on the opponent’s tower) and our alliance received at Red card and lost the match.

We also discussed later whether or not it would still be a Red card if you could manage to get the tube off of the tower by the end of the match. Does anyone know?

why the alliance didn’t receive a Red card for it?

Is it against the rules?

At Palmetto our human player threw a tube atop our own tower. At the end of the match we launched our own minibot on that tower and scored. We decided that if the refs decided to penalize us, we would decline the penalty…

The key is that it has to be your opponent’s tower for a penalty/red card. There is no penalty for interfering with your own scoring ability–this may be an oversight.

IIRC, this was their own tower. They did not get a red card or penalty, as far as I’m aware (this was the match in question). The match was fairly one-sided to begin with.

There was a match in the finals (I believe it was the first final) where Lisa accidentally got hit with one of the game pieces (she wasn’t looking and everyone kept telling her to duck), but there was no red card or penalty in that match either because inner tubes tend to fly wildly when thrown - I had to dodge a few while shooting practice matches.

Hello…
I was the coach for 1610 this year and don’t even remember that even though
i was on the feild. Right after that match I went out the back entrance and when i came back in I saw
Matt Glennon on a ladder taking it off the tower.

I had thought that maybe it had been from another match until I saw this post.
I probably did’nt see it happen due to the fact that I was concentrating on
coaching the drivers. In 2007 my son was the tube thrower for us that year and
threw a tube that landed and scored on the rack. So never say never.

This happened in week 1 at the alamo regional. It was either a square or a triangle, I can’t remember which. We were able to get it down with the hook and an extra pvc pole that we had by the scoring table. I don’t remember any penalties being assessed for doing this since it was not actively interfering with the other team’s scoring. It was stuck up top and didn’t block the path for the minibot to get up and score on the tower.

At Lone Star (at least I think it was Lone Star) we actually had someone “score” on a tower without deploying a mini bot. A tube hit the tower in the last 10 seconds of the match and was successful in activating the scoring plate, being the first (and only) tower to be scored on that match. We just voided out the tower score and the refs didn’t assess a penality here either.

This happened in week 1 at the alamo regional. It was either a square or a triangle, I can’t remember which. We were able to get it down with the hook and an extra pvc pole that we had by the scoring table.

In fact, here is a picture of the square tube on a stick from Alamo

Ask and I’ll receive! Thanks

Someone managed to do this at the Finger Lakes Regional too last year. It happened so early in the game that the mini-bot couldn’t reach the top of the pole and hit the sensor. If i recall correctly those points decided the game too.