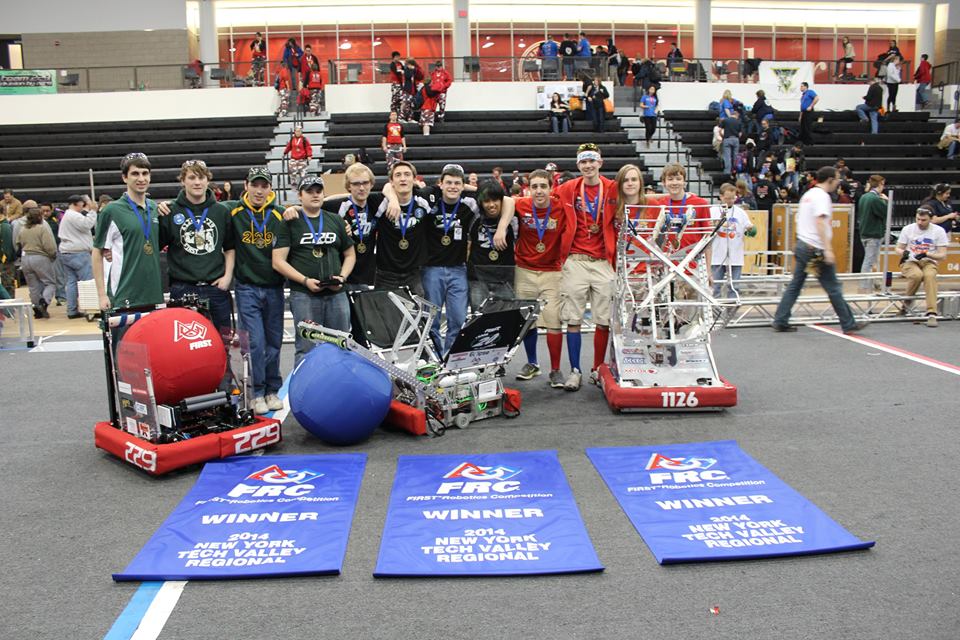 Haha is there any reason 20 is missing the back wheel in this picture?

Haha is there any reason 20 is missing the back wheel in this picture?

Because after Finals-2 our chain came off, the AndyMark hex bearing blew out, and the encoder on that side was busted. With some quick fixing we took the wheel off, changed the 2-ball autonomous so that it would only read the right side encoder, and hoped for the best competing with 5 wheels in the final match.

It was absolutely exciting and terrifying and one of the best experiences I’ve ever had in FRC.

That was such a fun alliance to play this game with! Having two of the most solid defensive teams at the event and two of the most threatening offensive teams in addition to getting 229’s collector working and electrical issues sorted out gave us a great deal of strategic flexibility. Thanks 1126 and 229!

Because after Finals-2 our chain came off, the AndyMark hex bearing blew out, and the encoder on that side was busted.

The chain was still on the sprocket and the encoder is still fine. However, the wheel and axle would do more harm than good with any possible repair in the 6 minutes we had to get the robot back out there. The chain was intentionally removed when the axle was taken out so it would not drag on the carpet. The encoder could not be used because the axle it was coupled to no longer existed. Because we only had positional feedback on one side of the drive train, the 2 ball auto was changed to reference the right side of the drive for feedback for both sides of the drive train. Eclipse drove straight enough in auto, hit both auto high goals, and we drove surprisingly well, scoring proficiently the rest of the match and playing harsh defense.

We did not know when the robot would fail during match 3, so we decided risking it and going for the 2 ball was worth it because we needed as many points as possible before the robot took a pounding. After getting off the field we realized the right side gearbox was grindy. We’ll be replacing the hex bearings with a different solution, the gears in the gearboxes that are worn out will be replaced, and we will be working toward other improvements for FLR.