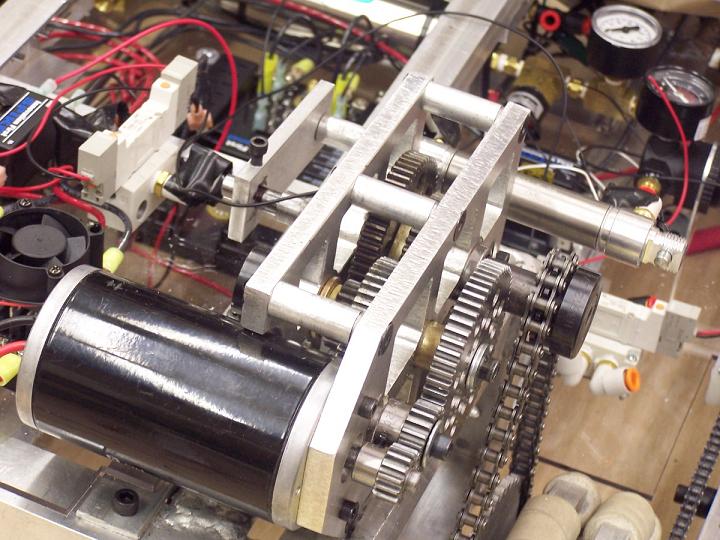 This is our 2005 version of our ball bearing style of shifting.

We decided to go with a two speed this year rather than three speed like last years because we felt it was not needed.

We will be competing in Annapolis, Philly, and Nats.

For more information about this type of transmission download this white paper or just search ChiefDelphi for 222 3 speed transmission.

Well since it seems that someone probably wanted to discuss this and never posted; I guess I can post the differences/similarities between this year and last year.

This year we only have two speeds instead of three.

This year we changed the gear attached to the CIM motor to a 15 tooth instead of a 14 tooth.

This year if something goes wrong, which it probably won’t, it is much easier to take the transmissions off.

First gear is still first gear with the exception of changing the 14 tooth CIM motor to the 15 tooth.

Third gear is still third gear with the exception of changing the 14 tooth CIM motor to the 15 tooth.

Still two pneumatic cylinders to shift, but each tranny has its own.

I have just uploaded 5MB movie to http://www.putfile.com/media.php?n=Robot-05-166 for all to see.

This movie is of our robot in action shifting from low to high and driving around.

You will be able to take a peak at our transmissions at: Annapolis, Philly, and Nats.