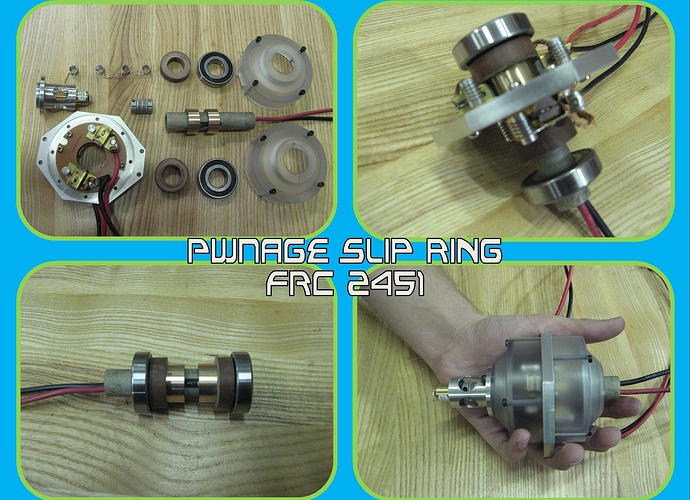 This is the slip-ring module we designed for a distributed swerve module during the 2012 off-season.

There are 2 complete brush assemblies used in the assembly taken from CIM motors. Each brush assembly uses two brushes to send power to the driven wheels motor lead. This doubles the brush surface area and simplifies construction. Radial ball bearings keep the two slip rings running concentric to the brush assemblies. There is also an integrated absolute encoder for wheel rotational angle feedback.

Questions and comments are welcome.

Here is a section view of the CAD model for the Slip Ring Assembly.

All pictures are also available at our facebook page located here

Very Cool! I love seeing design from your team since they are often outside the box and a real showcase of precision machining. What is the shaft made out of? What about the contact rings? After looking at the picture for a while, I understand why you would want to use two brush assemblies, but the color coding on your wires is a bit misleading, no? Would it be possible to separate the brush holder from the PCB and just use one per ring, reducing the number of CIMs you would have to sacrifice?
I can’t wait to see the rest of the swerve.
Rob

If I understand the purpose of this component, it would remove the limit to how many times a swerve with CIMs built into the modules could rotate, which is one of the major pitfalls of that design. Since a coaxial swerve design tends to eat up machining resources, I think the ability to make a simpler swerve to complement this is a significant benefit to a team like 2451. To my knowledge, they have one major machining sponsor (Genesis Automation), and the time it would take for them to make the components for a coaxial swerve seems like it would be better spent machining other things.

Very impressive. PWNAGE has quickly become a powerhouse team because they are able to produce stuff like this. I’m really looking forward to competing with them at Midwest this year!

You mentioned it was designed for a swerve module. Any plans to integrate this into a full swerve drive?

I’m curious how FIRST would rule on the legality of this as it is being made from CIMs.

Cool! This is the sort of cutting edge design stuff that you don’t see often here on CD. It looks like this could end up being a lot more simple than a coaxial swerve, and it looks really well engineered. I really love the machining too.

If you do run this as part of a swerve, would the two radial bearings on the top and bottom of the shaft take the weight of the robot, or does this assembly go on top of other bearings that supported the robot? Also, any plans for integrating a steering motor into this assembly? Finally, if you want to put encoders on the drive motors, will there be some other slip ring assembly to get the signal out?

This is a very risky investment of effort given the GDC’s historic position on slip rings. They have been prohibited some years, and have been allowed other years only if they were COTS (commerical off the shelf.) Last year’s [R44] stated:

“Branch circuits may include intermediate elements such as COTS connectors, splices, COTS flexible/rolling/sliding contacts, and COTS slip rings,…”
With the power distribution rules emphasis on the safe use of COTS components, I would say it is very unlikely that a home-made slip ring would be permitted, especially for high amperage motors circuits.

Also keep in mind the fabrication schedule rules such as last year’s [R18]:

“Robot elements designed or created before the Kick-off presentation, including software, are not permitted. EXAMPLE: A team realizes that the transmission designed and built in the fall perfectly fits their need for a transmission to drive the Robot arm. They build an exact copy of the transmission from the original design plans and bolt it on the Robot. This would be prohibited, as the transmission - although fabricated during the competition season - was built from detailed designs developed prior to kickoff.”
The example goes on to say that *software *that is developed prior to kick-off may be used if it is made generally available to other teams on a public forum. It becomes a COTS product because the software itself is the product. It does not say that the same is true for mechanical designs, although I know this has been a frequent topic. Perhaps someone knows if the Q&A Forum has made a crystal clear ruling on this.

After building a prototype we wired it in series with a CIM on one of our practice bots drivetrains. We then pushed a heavy box around our practice field at a low motor speed using the power of that one CIM alone. This simulated a high current load on the brush/slip ring. The main concern was fusing the brush to the slip ring under such high current loading. Another concern was sending too much heat into the slip ring and melting the solder joint between the slip ring and power lead. The polycarbonate housing was selected to be an electrical insulator as well as allow us to see if there was arcing between the brush and slip ring.

Since the slip ring was not being rotated in our practice bot like it would in a swerve, we were able to concentrate the current flow at one position on the slip ring. After pushing the box around the field we disassembled the slip ring unit and found no noticeable wear or deposits. This proved the CIM slip ring is a viable solution to use on a distributed swerve module. This was a perfect engineering exercise and a great learning experience for our team. We knew this was a topic discussed in the past so we thought we should share our experience on Chief Delphi.

What is the shaft made out of? What about the contact rings?

The shaft is made out of G10-Garolite which is an insulator, and the contact rings are made out of Alloy 932 Bronze.

After looking at the picture for a while, I understand why you would want to use two brush assemblies, but the color coding on your wires is a bit misleading, no?

We agree that for it to be competition legal, we would have to change the coloring on the wire.

If you do run this as part of a swerve, would the two radial bearings on the top and bottom of the shaft take the weight of the robot, or does this assembly go on top of other bearings that supported the robot?

It would be mounted on a structural piece of frame and the shaft would be connected to the swerve module by a flexible hose.

Nick,
I have to say this is an amazing assembly. Nice job to everyone involved. Unfortunately, the COTS rule (quoted above) on slip rings seems to take precedent. If team built slip ring assemblies were to be considered, this design surely would be on the top of my list as an allowed item! I like the dual brush assembly design. I doubt that you would experience any wear or deterioration with the use of just one brush per ring either. The CIM brush assembly wears mostly due to the commutator edges and arcing. Neither would be present in this design. Did you design the ring to be the same diameter as the CIM commutator or did you contour the brush to match the ring? Maximum brush contact with the ring is essential to keep resistance and heat to a minimum.
I see nothing that would flag this as contrary to electrical practice, it seems as if the team has thought of everything. Prior to the rule on COTS slip rings, I would have allowed this in and FRC robot.
Did you have to sacrifice CIM motors or were you able to find the brush assemblies as separate items? I would bet that further refinements could bring the cost and weight down as well. In this service, ball bearings are not needed unless you are using the bearing for other purposes. The rotational speed is low and the range of motion over it’s lifetime is also very low. The brushes would naturally follow any runout in a simple sleeve bearing. I like the addition of the rotary encoder as well.
All in all a very well thought out design. Congratulations!

In 2010 (prior to the current rule allowing COTS slip rings, and in the only year we had occasion to test the issue) slip rings were not mentioned in the rules, and any type of slip ring including COTS or home-made were disallowed by the Q&A forum. Prior to that they had been allowed by the Q&A Forum on several occasions, even though they were likewise not mentioned in the rules. Now that it is specified in the rules that they are allowed but must be COTS, it would seem that the issue is pretty clear cut, however there has been unpredictability on this issue with the Q&A Forum.

Modifying the CIM would be disallowed, and we can bet this rule is here to stay.

Modifying the CIM would be disallowed, and we can bet this rule is here to stay.

The rule concerns modifying motors used on the robot. While these parts come from a CIM, they are certainly not being used as a motor on the robot.