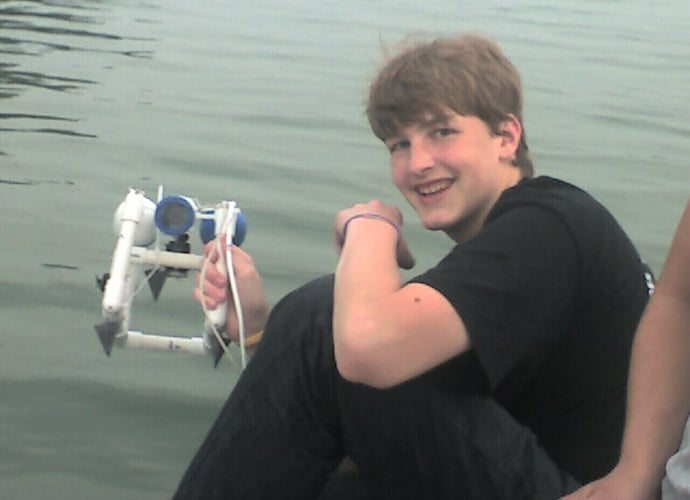 Could you give some more details on it? Looks cool…

Hey, you guys should enter the National Underwater Rootics Challenge, NURC! Team 842 Falcon Robotics and Chandler H.S. Wolfgang Robotics have teamed up with some companies to offer a competition for FIRST teams to compete in that is a little different. We hope as many FIRST teams enter as possible!! You have 99 percent of all the stuff you need to do this, all you need is water proof motors, Sump pumps work great!! On our website, we are posting how to… videos so we can help teams out. Please check it out

Yeah, it costs around $50 to make, (after getting the camera for free), the camera is normally around $50 itself. Obviously, information cant pass through water, so it uses a 30 foot tether. It’s powered using a normal 12v battery.

We made it after attending a seminar run by the Discovery World in Milwaukee, WI. This robot, unlike FRC robots, did come with instructions. Since we used pvc, it bouyant and so we used lead weights to keep it as close to nuetrally bouyant as possible. It works pretty well.

We kept the motors in film containers, and waterproofed the wire connections by melting wax on the holes in the containers. It uses 3 motors, 2 of which are angled to allow it to go fowards, backwards, left, and right, and then a motor to control the up and down motion.

So far we have taken it out twice on a clear lake here in Wisconsin, and it hasn’t failed us. Rather the TV we were using to record it failed the first time, and then a laptop the second time. Who knows, it may stay warm enough that we can get out one more time before it freezes over :yikes:

A few years ago, we built a PVC ROV and we modified PVC fittings with epoxy for waterproof conectors that were to be used in a swimming pool (20 foot depth). Our connections held up well, but the Pelican Case that is “waterproof” leaked. It had an O ring on the lid that leaked at a joint. A small leak, but when the ROV is underwater for a half hour, even a small leak lets in a lot of water.
http://www.phxhs.k12.az.us/education/components/scrapbook/default.php?sectiondetailid=44216&sc_id=1160057173&PHPSESSID=fca6c291b078dc9023493a828c4fb37a

Obviously, information can’t pass through water, so it uses a 30 foot tether.

Could possibly see a video of it moving?

Like i said, the tv wouldnt work well enough to get a tape in and record the first time and the second time we had laptop issues. So no video right now. We can hopfully get some up later though.

Here is some video of the ROV we built last year for the MATE competition. I would like to see 269 video too! Its great to see bots underwater. Andy are you guys going to enter the NURC, we are trying to get as many FIRST teams in it as we can. FIRST teams have most of the stuff they need, but the sump pums or bilge pump motors taht are water proof. We are trying to put as much stuff as wecan on the NURC site to help all the teams out. We really want to see this teake off. The MATE competition has moved to Canada, so we can no longer participate. There is no national competiton like mate now in the US, that is why we decided to host NURC. What do ya say? You gona dive in?