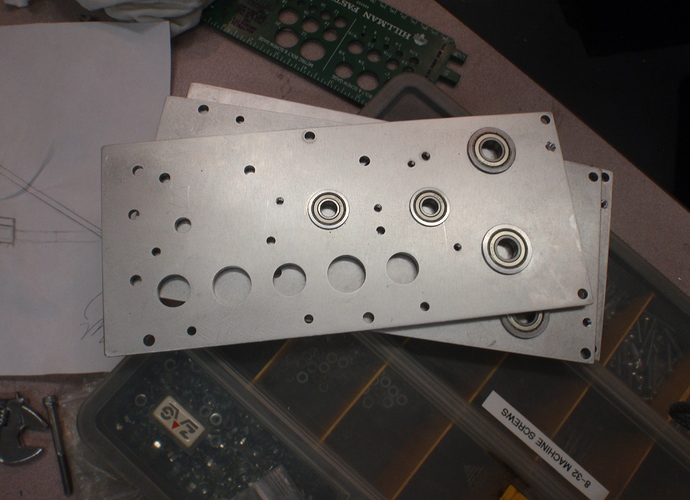 6 CIM drive with PTO for the climber. I can’t wait to see it assembled. Let’s see if 254 does something similar, a repeat from their 2010 robot…

Awww that was quick! Pretty close but if someone got it 100% on one try we’d be pretty upset with our teaser

Perhaps two arms for end-over-end climbing. One arm could be driven off the left side drive and the other off the right.

I’d recognize those Cim mounting patterns anywhere. This plate is set up for three CIM motors. I can see what looks like a mounting pattern for an encoder. This would seem overkill for just a drive platform, given this years game. SO it has to be for climbing. The plates look clean and well designed, though you could probably cut some material out to save weight.

You guys pretty much nailed it, it is a 6 CIM PTO but its got some other surprises in it, all those holes in that plate expect 2 have either an axle, motor or something else mounted to it

As for the the design unfortunately we only have 1 guy on our team that can CAD and he’s a JR that’s just started CADing this year. There’s 1 device in this tranny that through an oversight doesn’t quite fit ( which we now also have a completely different design for anyway so it works out ), so we decided to continue with this tranny learn all we can from it and make a rev 2 which we’ll finish up towards the end of week 5…ish.