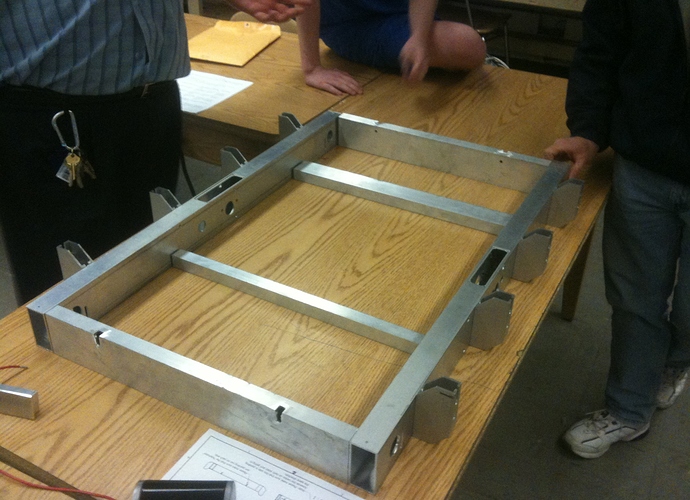 Here’s our chassis ready to be sent off and welded. All 1/8" wall tubing - 3x1 on the sides and 1x1 and 2x1 inside. Bumper mounts every few inches to comply with bumper rules (thanks GDC for the easy rules this year). Access windows on top to change internal belt drive - AL plate will be riveted on as reinforcement when not under repair.

In the words of Tom Heller, this chassis is sexy.

Looks good! How heavy is the frame?

I’m curious about weight as well.

Weight: Honestly have no idea. I didn’t do the chassis CAD and when I got a brief look at it today the material properties weren’t set. The chassis parts are out of shop now but the second they get back I’ll weigh them. It won’t be the lightest thing in the world, but we prefer weight down low - with a 9 foot high arm having such a low CG will be immensely helpful.

The wheels are 4" diameter. Gotta love a flat field, right?

The belts are internal for a few reasons. First, internal belt loops are cleaner and less in the way; the less space we take up in the center, the more room we have for things like electronics and our minibot deployment system. Second, they are less “open” so field debris cannot possibly get tangled with them.

As for the drawbacks to internal belts, we saw them and minimized them. Maintenance was a big worry for me, but I’m now convinced it’ll be not a problem. We tested these belts rigorously. Rapid speed changes, stalling the motors, mixes of both, and the belts did not skip or strip even once. Also, tensioning is not much of a problem. We have some fairly basic idlers in there for tension and it’s a very much “set it and forget it” thing - once you get the belts right you never need to touch them again. Just in case, we did a timed run for a full belt change and it took about 7 minutes. We weren’t satisfied, so we added the access window over the middle row, which is where most if not all of the holdup was. It should now be under 5 minutes to change a belt, and we plan on practicing those belt changes.

Are all the internals from Gates belting? Or did you use something else? Just curious.

Are all the internals from Gates belting? Or did you use something else? Just curious.

I particularly enjoy seeing this design come to fruition from its initial stages. Ah the design process at work is a beautiful thing.

We are using a 9mm wide 5mm pitch belt.