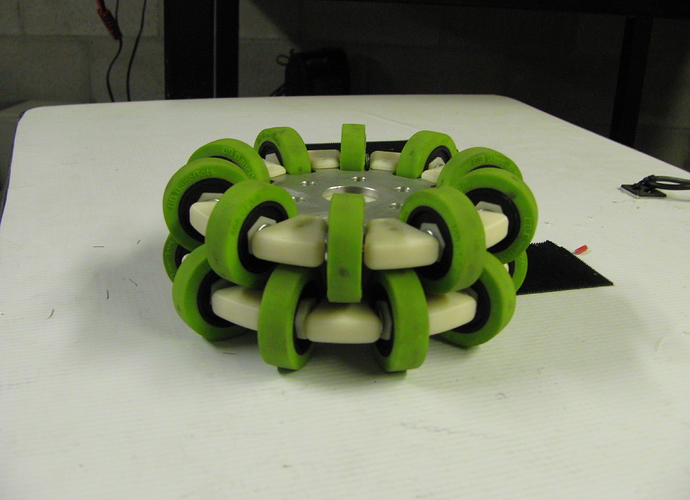 These omnis are made of two overlapping discs of omni wheels. We decided to go for a design using those tiny little green Andy-mark wheels. Because they were too big, we decided on two overlapping discs. The center is CNCed aluminum and all the little beige plastic parts were custom made in-house, using our 3D printer.
Aren_Hill February 11, 2010, 7:10pm #2

Those little wheels are from Banebots, not AndyMark, and i would really pay attention to them as that rubber can leave very quickly.

and those were the next harder durometer than the green ones.

We hope that the ware on the omnis would not be same as on the drive wheels most of the force on those wheel will be turned into rotational energy, I doubt that there will be alot of just grinding i guess is how you can put it on those wheels. Just for backup it should be easy enough to swap them out for a harder derometer of rubber.

Don’t worry. We have worked with those wheels before and we know how they are. They are easily replaced on our wheels. Besides, I guarantee they won’t end up like the other ones above, because it looks like those were used in a much different manner than ours will be.