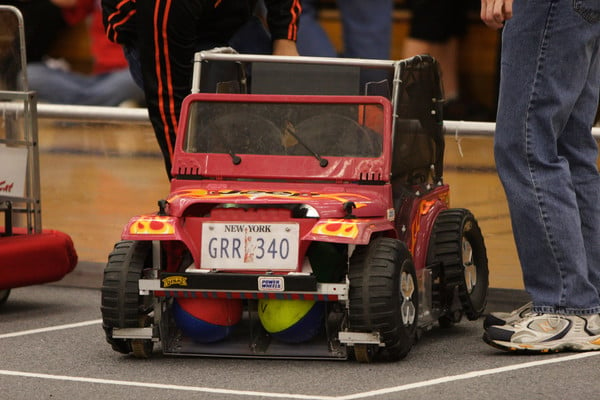 Thanks to Mike from robotphotos.org

You manage to recover the snapped off wheel or did you guys just toss it out?

…wow. That is a work of art, and amazingly cool at that. I hope that you all won awards and stuff for that?

We often wire up FP cars directly to train rookies on how to install and wire the control system. We then use the FP cars at demos. The very little kids like them better than the actual robots and they are safer to operate.

Do a picture search under “Jeepinator” to see our jeep in action at an NBC show in 2004.

How many balls does it hold?

HAHAHAHA!!!
that is soo amazing!
No wonder Motor Industry is facing a downfall; FIRST is taking over

Oh man. If FIRST had an award for robot aesthetics, I think you guys would take the cake.

How many balls does it hold?

14 at max
the Harv and hopper is made of off the shelf, bin, junk pile parts

Oh man. If FIRST had an award for robot aesthetics, I think you guys would take the cake.

They won for most unique robt design AKA the Mad Scientist award.

It was a real cool bot. Did i have a way to pick up balls or did it just look good and dump?

The kids did a great job on this. If it wasn’t for autonomous & transmission trouble it could have been amazing. It picked up from the floor & dumped quickly into the lower goal. The body was just for fun. We put it together to test out a new drive train but didn’t get very far. The frame held up fine but the IFI wheels wore down quickly & the AM shifters gave us fits all day. They kept coming out of gear. Our re-re-recycled 2005 AM’s held up fine in the rookie bot but the 2006 shifters which we had never yet used had problems. I’m not knocking the AM’s we had some students in my Robotics class put them together. Time to dissect & analyze & re assemble.

I thought it was a cool looking bot. You should put in a radio Rees

I thought it was a cool looking bot. You should put in a radio Rees

HA HA. The students were going to put in a wide varieties of accessories that included a radio, and moving wipers

. They simply cut these out to make the robot function. To answer Koko Ed’s question, this picture must have been before that match where one of the spinners broke into lots of pieces.

It was, despite some of the minor problems in the beginning, a really cool bot! How long did it take to make?

It was, despite some of the minor problems in the beginning, a really cool bot! How long did it take to make?

Our team was actually going to construct a robotic go-cart, but instead we decided to create another “frank bot” since the other one started attacking members on the team because it was severely damaged from an accident.

Your Jeep robot is very creative, and best of all you guys got it together before the ruckus. Good job 340

It was such a fun project. We had high expectations for it… ie) working windshield wipers, new paint job, working horn. This, as we should have known, weren’t going to get done.

We had the windshield wipers working on a 90 degree pneumatic, but took them off due to space and time restraints.
We will get the transmissions going again. We’re looking into the servo shifters to eliminate the whole pneumatics systems.
After we get the basics fixed, we’ll look into the new paint job and all the other accessories.
It was fun driving the Jeep, when it actually worked.

The harvester worked like a champ. We scored 24 points in one of our matches all by ourselves, due to 1567 and 2567 both not working.
One time during autonomous, a team blasted across the field and hit our Jeep, which was standing still. Our drive team yelled across the field…“WATCH THE PAINT!!! I HOPE YOU HAVE INSURANCE!!!”
It was cool to have more fun then you normally would with a robot.

Haha, I remember one of the refs (greg?) saying to check if it was turned on. Then check the oil gauge!