Looking for feedback on this design. It fits on a 220mm printbed and is printed in 2 parts joined by the cut off ends of rivets. Uses less than 1kg of filament but has broken with the minimal infill so we’ll test higher infill and thicker walls. Here’s a clip of us launching one power cell. 2 inches of compression. Gear reduction is too high right now. Recommendations would be appreciated for gear reduction using versaplanatery gearboxes and 775s or BAGs. See the design and test clip below.

Are we the only team to try a 3d printed shooter for the infinite recharge game? If not please share any photos or videos from testing or competition.

I plan to share the design when it is more robust and reliable. 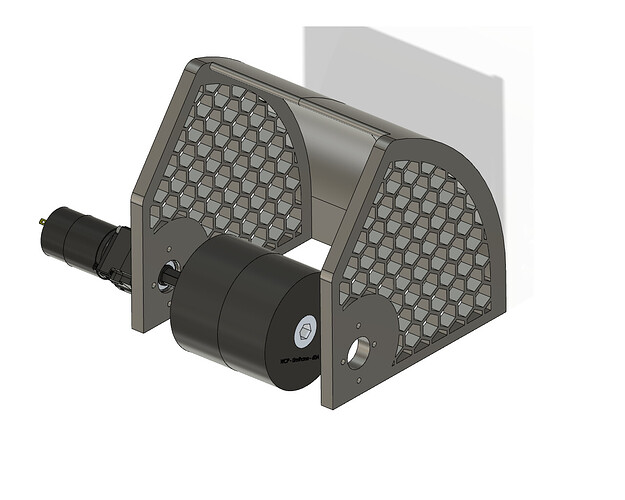 Looks like that CAD is missing half of the shooter axle.

I don’t have it visible in the picture but it is there. A bearing can go on the other side or another motor and gearbox can be attached.

That shaft may bend over time, as ours did. Consider putting your wheels onto a 1.25" tube axle instead and drive that with a hex hub.
Looks like you have it in the video but wanted to check.

We had euro board sides and printed segments for the curve. We then used all thread to sandwich the hole thing together. We didn’t have time to print all the segments so we left some gaps. We had one little chip out of the corner of one segment after our week 2 2020 event. We are planning on printing the curve solid for this year.

I would bevel or round your inside and outside corners to cut down on the bending stress around the hood. Go pretty big, but still staying away from the squashed ball.
Fun to experiment with!

Are we the only team to try a 3d printed shooter for the infinite recharge game? If not please share any photos or videos from testing or competition. 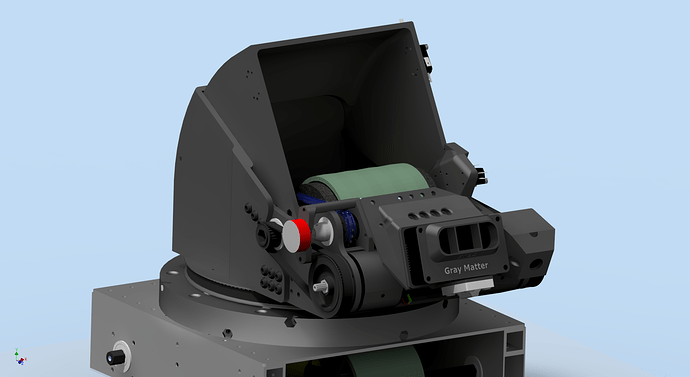 The shooter and turret is almost completely made of 3D printed parts, linked together with screws, the only notable exceptions being the flywheel shaft (Vex 1/2" Hex), and the main bearing wheel/disk of the turret (custom-milled aluminum ring), and the various electronic components (obviously). The major parts were printed full-width to prevent any rigidity issues (they just barely fit on the print bed). It’s powered by two Falcon 500 motors on a 1:2 (speed increase) ratio for the flywheel, and a pair of NEO550s powering the hood adjustment and turret rotation respectively.

With the exception of the custom belt sprocket for the turret rotation that we had to print out of Onyx (this was more due to the superior accuracy of the Markforged printer, rather than a strength concern), everything else was printed using regular PLA+ filament on a medium resolution (0.2mm layer height), with about 25% infill and 5x inside/outside perimeters.

The system was designed to be overpowered so as to reduce or eliminate any significant arc from the balls flight path, thus making targeting substantially easier (essentially, point-and-shoot). In the end, the primary limiting factor of the design was actually the ability of the Limelight to accurately track the target, especially at very close, or very long range, due to it’s mounting location and resolution.

Though it didn’t cause any issues, in retrospect, I also would have liked to mount the Falcons on the side of the shooter and connect them using 90-degree gear adapters as the overall length of the assembly posed some design problems. I also think I would have tried to drive the hood adjustment from both sides of the assembly from a single shaft, rather than just powering the one side, as this led to the adjustable hood “sticking” in spots sometimes (we came up with a fix, but ideally the issue would be avoided entirely).

Here’s some of the early testing videos: 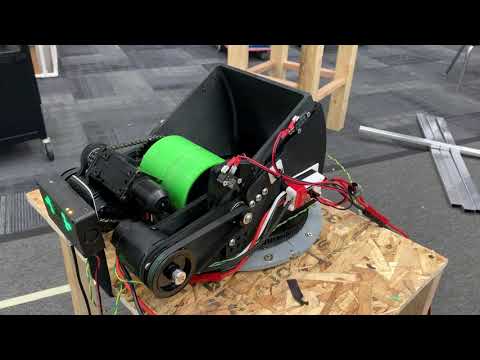 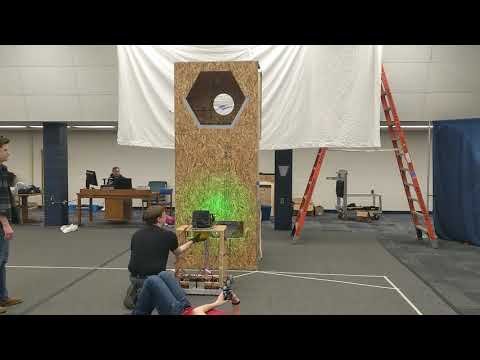 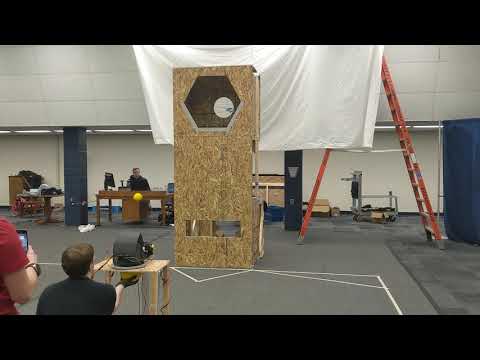 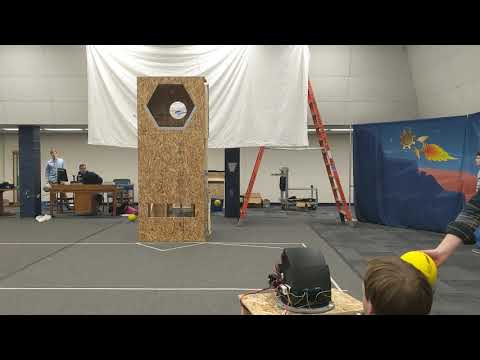 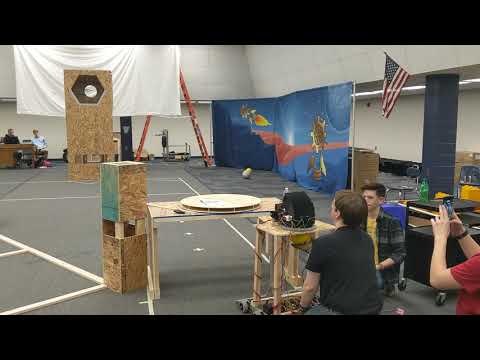 Took a big longer to work out the kinks, but the turret works too: 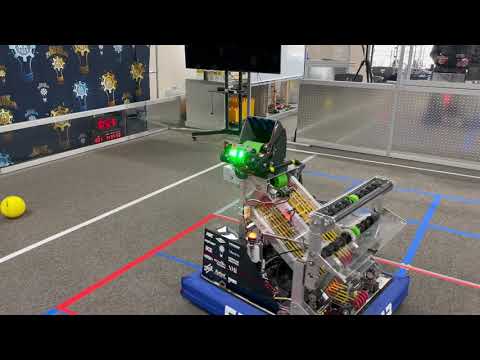 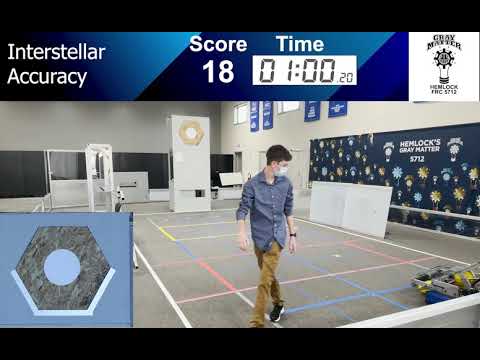 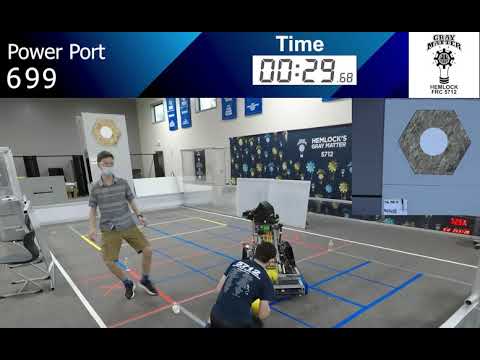 EDIT: Guess it helps to read how old the thread is first… >_>

I thought your post brought value - any CAD available for those that want to learn more?

Sure! To be honest the pictures don’t really do it justice anyways…

Let me know if you have any questions.

We also 3D printed parts of our launcher, namely the adjustable hood and turret pulley. Our launcher was heavily inspired by 319’s public CAD they released during 2020. Here’s a link to an imgur album with some pictures of the assembly. The pictures show 4" Colson wheels, but we ended up moving to a 6" custom wheel fabbed by a sponsor before our event. You can find videos of the launcher in action on our TBA page from 2020.

We did run into problems with the durability of the PLA we used after a full 18-match event, but it wasn’t major, or anything we didn’t expect. We also had trouble with getting the tooth profile of the printed turret pulley just right, causing our turret belt to occasionally slip. This was something we planned to fix after our first event last year.

Besides that, the only downsides to printing we ran into were:

If you have any further questions just reply or message me, and I’m happy to answer!