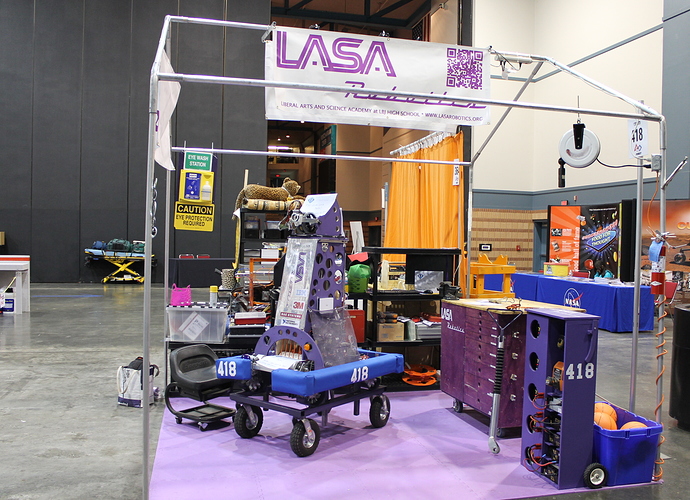 That is a very nice pit. Where did you get those shelves?

It looks weird for some reason. Was LASA on an island all their own? No pit partners?

I’ll ask about the shelves or perhaps one of the pit crew will check into this thread and can answer. Are you talking about those black ones in the back?

Alex, we had a corner pit on the first row of 3 pits as you entered the Pits. From where I took this photo, I was standing in the entrance to the 2nd Pit area that also housed the Volunteer check-in and the Volunteer lounge. Directly across from us was another row of 3 pits with a wide aisle between. It still got crowded but it was nice.

When 1902 attended the Bayou Regional, I asked a couple of their mentors, Sarah Plemmons and Wendy Austin, tons of questions about the Regional. I was on a ‘mission’ to try to get 418 to Bayou Regional and their answers helped me. One of the things they talked about was the amount of space in the Pits. This year, I think Bayou increased the number of competing teams but the teams still had a nice pit space in which to work. 418 was lucky because the NASA table/display was in front as you entered the Pit area and it allowed for more space for foot traffic to be able to move between the 2 Pit areas and back to the arena, as well as out to the lobby. So - that’s what you are seeing, Alex. From my standpoint, we had the best pit space in the venue.

This is probably at the beginning of one of the days before the teams were allowed in the Pits and that could make it look weird, too. The calm before the rumble of the storm.

It looks so spacious! I’m completely jealous. Anyone from Michigan knows what I’m talking about.

I believe Jane volunteers, so she may have seen it then. That, or it was a Thursday when the 5 team members were allowed in, so nobody was really in the way.

I volunteered during the Regional and had to be there for check-in each morning before the teams were allowed in. The area that I volunteered in was the practice field which was in the Pits so the 2nd Pit area was my stomping ground. I got to glance at 418’s pit as I passed by on the way to the Volunteer lounge or to check-in.

Because I knew how hard the team worked on this pit set-up, I wanted to take a photo for them. That’s what I was doing. I am also a HUGE fan of NASA and was thrilled to be able to have them in the photo as well. It was a big deal for me, personally.

Oh! Pit Admin was also in the 1st Pit area.

The Bayou Regional is a wonderful Regional in every way and they love for folks to come compete and have a great time.

That is a very nice pit. Where did you get those shelves?

The black shelves are from Lowes.