pic: (447) How do YOU keep programmers out of the electronics? 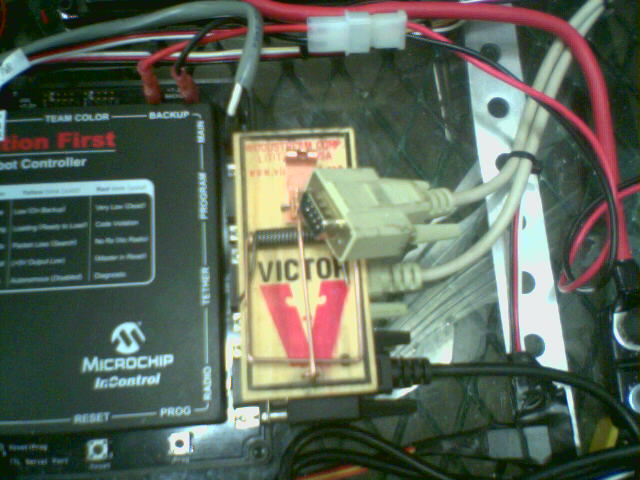 You know its happened to you. You’re the head electronics guy, you miss a day because you have skill bowl, you come back … BAM! all the pwms are unplugged (of course you haven’t got around to labeling them yet), he’s holding a screw driver, and the programmer is ripping his hair out: “IT DOESN’T WORK!”

So I came up with a little “Keep your electronics safe” kit.

You know its happened to you. You’re the head electronics guy, you miss a day because you have skill bowl, you come back … BAM! all the pwms are unplugged (of course you haven’t got around to labeling them yet), he’s holding a screw driver, and the programmer is ripping his hair out: “IT DOESN’T WORK!”

So I came up with a little “Keep your electronics safe” kit.

well, as a programmer i belive that is completly evil, its hard enough when the speed controllers are near the program port. but having a mouse trap thats just plain evil. but some thing u can tell the programmer that the mouse trap is the new model victor on it. since it says victor.

i think a week ago, we were debugging the pwm connections, and one of them wasnt working. so we unplugged the pwm cable, while the robot was on. so when we tried to plug it back in, i accidentally touched the pwm cable to the metal fins IN the speed controller, ZZAPPPP, sparks, and the speed controller blows. i thought i blew out the pwm port on the rc also, it scared the crud out of me. its why my sig says proud destroyer of a victor.

Slight physical blocks will never stop a good programmer, we can just program around it.

Slight physical blocks will never stop a good programmer, we can just program around it.

yes but in the spur of the moment, you have to dl the new code, uve been called to be queued up, theres a mouse trap above the program port, then SNAP, pinched fingers = bad typing, and pain.

theres a mouse trap above the program port, then SNAP, pinched fingers = bad typing, and pain.

see, the programmer in its natural habitat will instinctively blame the electronics for the problem:

just this evening the programmer and his dad spent (no exaggeration) 1.5 hrs troubleshooting the electronics, before they figured out “hey, i just loaded a new code” :ahh:

as a good electronics person, whenever you see a programmer with a screwdriver, you must immediately inform the proper authorities

personally, I don’t think there is any need for a separate electrical and programming group. The programmers should be the ones to do the electronics and programming, this way they are completely in control of their code and can more easily find bugs in their code, or modify electronics on the ui or bot more quickly. seems more efficient to me. and by the way, 1.5 hours shouldn’t be complained about, unless you have years of experience… I won’t go into how much time we’ve spent troubleshooting our pneumatics. came down to a bad pwm wire. I spent probably 6 hours overall, modifying code, etc. because they always thought it was a problem in my code. wow, wish I had more experience.

First off, I’m not sure that you are using the correct Victor for this year, but unless you post a pic with the model number I guess we have to trust you.

Third, if they’re going to blame you for it anyway, you might as well have fun.

Fourth, as a mentor I have to frown on this sort of thing.

Fifth, as a former programmer and amateur radio operator,

Sixth, remember, as fur-bearing creatures, programmers may only be trapped between November and March.

1.5 hours shouldn’t be complained about, unless you have years of experience…

Well the funny thing is, this is my sixth year on this team, and my first four years (back in the glorious days of basic) I did electronics and programming. The two aformentioned programmers on my team are second year (a father and a son). What I did was, after spending about 10 mins tracing all my connections with an ohm meter, I did the only logical thing and (in my mind) blamed it on the programmers. One hour and twenty minutes later, they tried a new code and … IT WORKED! :ahh: I thought: “Eh, might as well let them figure it out for themselves.”

So I completly agree with

Third, if they’re going to blame you for it anyway, you might as well have fun.

you are a wise man Rick

I agree it seems odd to have seperate electronics and programming teams, unless you have a crazybig team and it makes sense that way. My co-programmers and I do all the electronics as well. This makes it soo much more efficient, especially with the recent addition of such electronics as the camera. We also are less likely to get in each others’ way. But, we’ve always had this sort of “mechanical team” and “everything else technical” team

When Alan Anderson is your teams programmer…you don’t keep him out of the electronics…you encourage him.

If I only have a contraptio which allowed to me keep programmers away from all the electronic equipment, then I’ll be a happy camper.

One of the programmers was working with our gyro for a few days before we were to mount it onto the electronics board. When it finally came time to mount the gyro, I couldn’t find it. So I asked him where he put it, but he couldn’t remember. I sent him to look for it; ten minutes later he turns up with nothing and says that he has to go back to work. Which left me to look for that gyro, which by the way happened to have been stacked away UNDER just about every storage bin we have. Now thankfully, the gyro wasn’t crushed at all, the bins were supported by other spare parts that I had lost.

Man… I’m telling you electronics people, keep track of all your stuff.
No offense to our programmers, I love 'em, they are the life force of the robot.

My being from 447 as well, I would have to disagree with the eff. of combining the subteams. We always ( even in relaxing times ) have this constant urgency,lol. Having 2 subteams for programming and electronics gives us, the Machine Shop Team, 2 places to blame for any problems. . . . . . because it is NEVER a the our fault! lol :rolleyes:

Pic on how to keep the remainder of the robot safe from the Electronic/Programming Team COMING SOON!

because of ppl like you, i do not TOUCH the robot. i don’t even press the load button or the reset button. nooo touchy. but i like it better like that, this way, when something goes wrong, i can wholly blame the electronics ppl and not just partially. =)

That’s why you be both

I program and do electronics.

I cant see how teams succeed with both teams being completely separate unless you had some great communications. Heck, it’s probably a good idea to have everyone be cross trained in another team for good communications.

And a small jab at the electronics only people:
Lets be honest, it’s just wiring! It’s not like you have to build a custom robotic controller! (J/K Please don’t flame me

(lol, this isnt a flame, its safe to read on

I agree with you 100% The wiring of a FIRST robot is “just wiring” But the conceptualizing and creating of things like virtual joysticks, and a full optical control system is not “just wiring” I programmed in basic for my first 4 years, with the default code and a few if statements, programming is “just programming” but if you want to work autonomous magick, you have to know what your doing. I tell you a small parable to emphasise my point. :yikes:

I missed this last saturday because of skillbowl regionals. I came back late saturday afternoon to the all too everpresent programmer cries of “ITS WIRED WRONG!” I asked: “What did you people change?” I got the good ol’ “nothing, your wiring is wrong, I can’t do anything till you fix it.”

I make mistakes, so I probed a little deeper and broke out my volt meter and found out that the programmer’s dad had wired up the banner sensor himself (with help from his programmer son of course). It was wired into a PWM sharing a common +5 with a hall-effect sensor. (Now at this point the programmers reading this are saying “so” and the electrcians with 3+ years are saying “OMFG BANANNAS!”)

I’ll just let you know, the banner sensors (the throwback optical sensors from 3ish years ago) have to, HAVE TO, have a seperate +12 to operate. If you run them straight into a PWM with +5 it will completly bog down your digital in bus and stop all robot actions.

So once I found this problem, I became aware of this buzzing sound. It was the constant “advice” of the programmers on how to fix “my” wiring problems. Little did they know, one of their own had done it, and I knew how to fix it. So I “Had Fun”, I went into the other room, roamed around on chiefdelphi, checked my e-mail, checked the CAL ladder, and after 1.5 hrs went back in, after the programmers had officially decleared we had a faulty RC and the world was ending, I fixed the problem in one pimptastic swoop. I took the +5 and - the hall-effect and banner senseor were sharing and re-wired them to the breaker panel (because I knew the hall-effect was rated up to around +15 I think).

Moral of the story:

It is not a good idea to keep programmers away from electronics, unless they do not know electronics, which they should because electronics are very related.

Good idea except instead of phasing them out, I would recommend that you teach both groups how to do both (just in case), instead of just having the electronics team doing both, and of course you are right, programming is not hard at all.

because of ppl like you, i do not TOUCH the robot. i don’t even press the load button or the reset button. nooo touchy. but i like it better like that, this way, when something goes wrong, i can wholly blame the electronics ppl and not just partially. =)