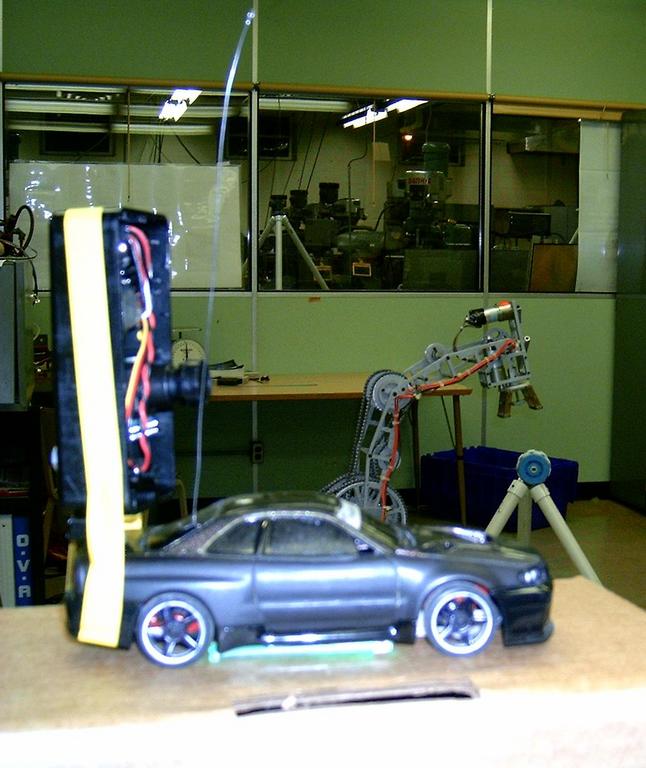 SkyLine GTR V-spec R32, those cims gots nothing on us

Very nice mr rufus, I cant wait to see what you guys put together…

How about a controls teaser? I’m sure you’ve cooked up something extra special for us this year:)

I am not sure what to think… Are you trying to show us that you are going to have a tiny car with a camera on it? Or the arm? Or both? In any case what on earth is that thing on the tetra? And that is one sweet looking arm.

To me it would apear that the car could just be one of rufus’s crazy projects, however the arm in the background apears be attached to the car preparing to grab that tetra, but it looks more like the old camera trick of forced perspective, making it look like they are attached but the smaller car is just closer to the camera making them look the same size. also the car doubles as covering the rest of the robot from our prying eyes

I cant wait to see the real thing!

but look like your testing programming with the cam.

I hadnt seen that. I had thought the car was just supposed to cover up the robot. It would actually look quite a bit like the car had the arm on it if the car were in focus and the camera were lowered a few inches so you couldnt see the top of the car. I think that (at least on my digital camera) there is a way you can select something you want to focus on or something, and if you put the camera on a tripod and took two pics, one where you focused on the car, and the other on the arm then used photoshop to put them together you could probably get kind of a neat effect. Then again if you are using photoshop then I guess you could just skip it all and photoshop the arm in.
Anyway that was all kind of irrelevant. I cant stop looking at that arm. I love looking at other teams robots because they look so nice. We build our robots using a wood band saw, a sawzall, a grinder, and most importantly absolutely no design. Sometimes we have sort of a general idea but mostly we just think it up as we go.

none of us are in photography

so our perspective is a little off

but we are testing programming with the cam

maybe for our second teaser ill spend some time in photoshop :yikes: