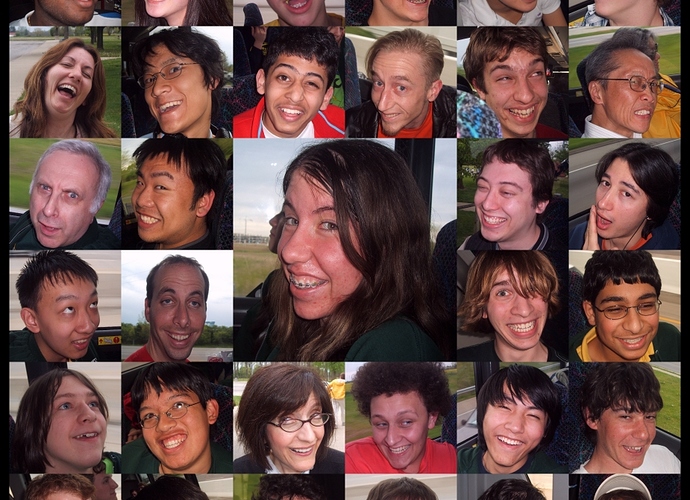 Story:
On the way back from Atlanta, we became a tad bit bored of just sitting around on the bus, so we started taking random pictures, and we happened to snap a humorous shot of our human player, Melonie. (center) After that, some people began to imitate her expression, so I took photos of that, and then challenged everyone else on the bus to see who would come the closest to imitating Melonie.

The Challenge:
Take a picture of yourself or your team members trying to do the best impersonation of Melonie! This could become an interesting collage…

that was a long bus ride back up here… I’d glad I slept through it (and our driver made it back in only 11 hours or so)
poor Melonie though!

Bottom right, i tried. I think so far the winner might very well be our very own Don Wright (row 4 column 2)… Sweet collage.

I would call the bus company - I think that bus had a exhaust leak into the passenger compartment! :ahh:

This compares nothing to 1503’s 22 hour bus ride home from Atlanta, our bus was having trouble. We would stop every or two hour for about 20-30 minutes because the bus needed to “cool” down, but overall we had a great time with Team 1114 and 188 who were on our bus.

That was SOOO much fun! even though the joke was on me, I know you guys were laughing WITH me, not at me…ahem…right? lol. either way, it was an awesome bus ride. cant wait till IRI! :yikes: <—that is an awesome smiley! hehe