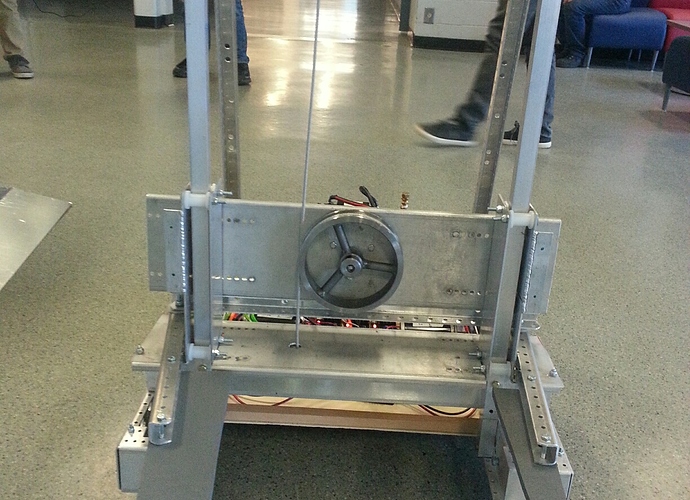 To keep the lift simple, the wire rope stays fixed and the winch moves. Three wraps of wire rope around a 6" diameter capstan driven by a Taigene Van Door Motor. The eye bolt at top adjusts the tension in the line. It can lift two totes plus a bin.
Oblarg January 1, 2019, 11:56am #2

I like this, a lot. Extremely simple, easy-to-maintain, and a cool application of a mechanism not seen very often. I also dig the simplicity of your linear bearing system.

Thanks! We actually got pretty lucky. The motor has enough torque to lift two totes and a bin (plus the rather hefty lift mechanism itself) but not quite enough torque to pull the lift mechanism apart. Okay… it wasn’t luck that we had enough torque to lift the stack… that was a bit of physics and the Taigene motor power data. It was what would happen when we hit the top and the bottom of the lift that worried me. We had originally planned to add limit switches top and bottom (and if the team has time, I expect they will) but they are not required.

On the other hand, the taigene backdrives easier than I remember, so they actually have to use a bit of current to hold it in position. So long as they only use a little bit of current it seems to work okay. Cramming it full power on and stalled at the very top of the lift will trip the breakers and the lift and load will slowly descend. My faith in worm gear lifts remains solid!

Nice. Looking forward to working with you guys in Calgary.