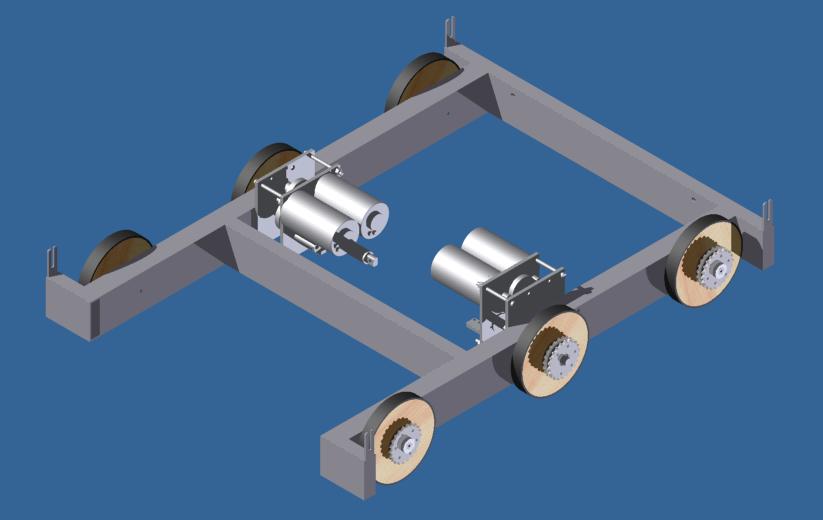 Specs:
-6’’ Baltic birch plywood wheels with AM hubs and sprockets
-fits both #25 & #35 sprockets
-cantilevered base
-direct SS drive with hex shaft
-floating tensioners
-grooves milled into body to align perpendicular pieces for welding
-41lbs (will not be lighted until needed)
-axles are supported on one side thru a 1/2in hole and bolted on the other side
-rails are 1.5’‘x3’’ and cross supports 1’‘x3’’

Also please pick away at the design cause i want to continue in this direction if possible cause it seems a lot easier to do maintenance work and quick to machine.

The first thing that strikes me is that it looks as if you plan to run a chain from your transmission to the rear wheel, which drives the middle wheel, which drives the front wheel. This is fine, but if this is the case, I’d suggest moving the transmissions right over the rear wheel to decrease the amount of chain you’re using. Less chain=less chance to derail/stretch (especially if you’re using #25 chain). The only other thing I can gather from this picture is that you’re planning to drive the center axle from the gearbox on the inside of the chassis and run chain to the front and rear wheels from there. If so, what’s the second sprocket on the rear wheel for?

Also, I can’t really tell what kind of metal you’re using for the chassis (solid, tubing?). If it’s solid metal, I think it’ll be MUCH heavier than you think it will be, and it’s not just a competition weight limit at that point, it’s a convenience issue, trying to lift a robot made of solid metal beams is really hard, and you may also have motor power issues. It would be a lot less trouble (even though maybe slightly harder to weld) if you used aluminum tubing. You could even put notches in the frame, just dremel out a hole in the side of one tube the size of the end of the other tube that’s going there, then weld away. I guarantee that 1/8" sidewall tubing will not have any significant strength difference from solid metal for the things you’ll be using it in. If you’re worried about strength, you can inject the tubing with polyurethane foam (that hard insulation foam). It’s very light, hard, and will stiffen up any hollow frame quite easily. Just be careful if you put it in before you weld, as it probably lets off some pretty mean gases if you heat it up to that point.

Like the design, looks very solid, with plenty of room for add-ons. Quick question, what are those prongs at each of the corners going to hold?

To answer the FIRST question. 1323 has been welding their frames since 2006. None of our bot’s drivetrain welds have broken. They are still intact and you don’t have to worry to much about welding your chassis together. Its fine and I prefer welding because there are less nuts & bolts that can get loose during a competition.

Daltore, I’m pretty sure he’s using 1/8th or 1/16th wall, solid would just be overkill. Also I think the prongs at the end are for bumpers, just a thought. As for the canterlivering, our team has never done it, so i’ll let someone else answer that.

Unless you are a pro, assume that the material just outside of the aluminum gets annealed during the welding process. i.e. if you are making a chassis our of 6061 T6 AL, assume strength as annealed 6061. We have had several weld fractures, but they were due to 1 of three issues:

Is that AA 6063-T52 alloy, 1 in × 3 in × 0.125 in rectangular extrusion? That’s weldable for sure, and decently machinable. If you weld it, the properties of the metal in the area of the weld will approximate AA 6063-O instead (which is the annealed, or softest condition for that alloy). Have a look here for more exact figures (-T52 is pretty close to -T5). Basically, the heat-affected zone and the weld material plastically deform (i.e. become permanently bent out of shape, as opposed to elastically deforming) much more easily than the tempered base metal. But the stiffness is essentially the same (modulus of elasticity doesn’t depend on heat treatment), so as long as you don’t exceed the yield stress in any given area, they’ll both perform equivalently.

If bumpers persist in 2010, there will probably be relatively few occasions where the welded joints would experience enough stress to yield them. So basically, I wouldn’t be too worried about it, unless you’re planning to expose parts of the frame. However, it’s a good idea to avoid placing welds where you know there’s going to be a serious stress concentration (because that’s asking for trouble).

One rule from 2009 that you need to consider is the requirement that bumpers be supported along their entire perimeter with something structural. (The precise definition of structural in this context wasn’t clear, but in practice, just about anything was acceptable.)

I’d personally use a bit more support for the cantilevered axles—one set of bearings near the wheel, and another set on the other side of the extrusion, as far away as possible. The size and position of those bearings depends somewhat on the game. If it was for Lunacy, I’d be comfortable with smaller bearings, because there’s really no chance of shock loading. But if there’s climbing (and therefore falling) involved, I might want to use a larger (stronger) bearing, or even a bushing instead, in order to make sure that there’s no bearing damage if the robot lands hard on its wheels.

One other issue with having the chain on that side of the wheels—if your bearings do get sloppy, a small misalignment or amount of radial play at the far bearing will be magnified at the location of the sprockets. You might end up with problems tensioning the chain, if you do it that way, because the axles will be free to wobble. Conversely, if you tension the chain, you might inadvertently misalign the inner races of the far bearings (by pulling them to one side). That reduces efficiency, and can cause bearing failure.

This isn’t specific to this base, but more of a general statement on welded joints.

You can save your team a lot of heartache if you spend some time thinking about and analyzing the forces that are acting on the welded joints. If you can then design the joints so that weld alone doesn’t take the stress from these forces, you’ll end up with a much more reliable design obviously.

You’re rear cross member is a decent example of this, the way it currently is an impact on it’s rear will cause it to push directly onto the siderails. If the siderails extended past the cross member, and the cross member was between them, the weld would take the entire load. A lot of the times it’s really a trivial difference.

I’d also advise you spend a little time learning about the different types/shapes of welded joints. Once again, a usually trivial change in frame design can result in a joint that is much stronger due to the weld itself being easier to do, or a stronger weld.

This spreadsheet may help you to manage the trade offs of the cantilevered axles.