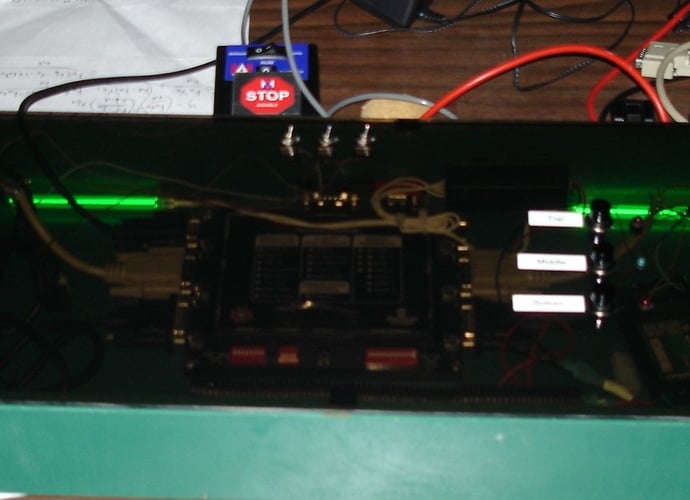 We were thinking of doing this, but I think that there is something somewhere in the rules that says that you can’t. I am not 100% sure, but I know that we were going to but we ended up not because of a “illuminated lighting” problem. If you get a chance I would check out the rules in the FRC manual, because I would be extremely unfortunate if you got to the competition and couldn’t use this great achievement of design. But other then that minor rule, I think that your board is sweet, and great job on it.

Normally, lights on the OI shouldn’t be a problem as long as they have a separate battery pack and aren’t connected to the joystick ports somehow. However, I could see inspectors taking issue with your use of neon green lights, specifically as a violation of R33:

<R33> No devices or decorations are permitted on the ROBOT that are intended to jam or interfere with the operation of the vision system (i.e. changing ROBOT color to confuse opponent’s vision system).

(Remember, other rules make it clear that the OI is considered part of the ROBOT and therefore this rule does apply).

As an additional note, I’d advise turning off any neon lights during the match. We had neon on our operator console back in 2002 (and 2003?) and we saw problems with the radio link while they were on. We put a switch on ours so that the drivers could turn them off before the match began.

The lights are powered up separately and we just won’t run them when on the field to play it safe. Pretty much for aethetics off the field anyways.