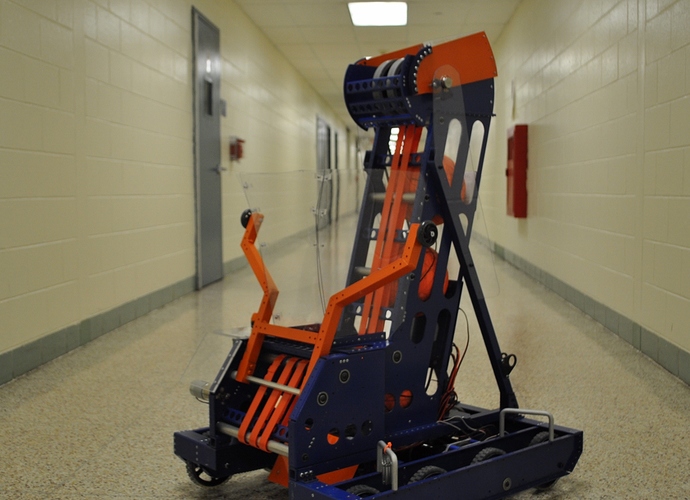 Here’s 816’s 2012 Robot in it’s uncompleted glory. It’s still missing some of the front appendage hardware, the rear appendage and some other little things. Here are some specs:

Ball Handling:
-Front Appendage Helps to Funnel Balls to Intake (Pending Revision)
-Intake Lifts Ball From Floor To Hopper (AM-9015)
-Hopper is Capable Of Receiving Three Balls Directly From the Inbounder
-Ball Lift Transports Balls From Hopper To Shooter (AM-9015)

We’re Extremely Proud Of What We’ve put in the Bag. With a little bit of tweaking and refinement, we feel that we just might make some magic happen this year.

Huge, Huge Thanks go out to James Tonthat, Sean Cantrell, Aren Hill, Ranjit Chahal, Jared Russell, Akash Rastogi, Andrew Schrieber, Nick Lawrence and The EWCP for their Help This Season. Collaboration is a Beautiful Thing. (Yes, there is a twin of this robot - but it also belongs to 816.

Seems great minds do think alike. I am excited to see this in competition.

Which btw, where are you guys competing??

GL through the season.

Just a really nice looking bot you guys made this year. Seems like every year 816 gets better and better. This robot is going to be one to watch in 2012.

Always excited to see the next blue and orange robot.

Looks great Dustin. Hopefully our robots will be able to cross paths at Championships!!

This is easily 816’s best machine to date. Not only is this the most effective 816 robot, but also the simplest. It’s scary to imagine the iterations that are going on with that practice bot :ahh:

Very impressive work. I can’t wait to play with you guys in Chestnut Hill.

Looks great 816! can’t wait to check it out at Chestnut Hill

Looks great 816! can’t wait to check it out at Chestnut Hill

Ditto. Great looking machine! Hopefully we will get a chance to play on the same alliance at Chestnut Hill!

How is your hood setup with the 2 vex motors?

Thanks for all the compliments everyone, I’ll be sure to pass them onto the team.

Which btw, where are you guys competing??

As of right now, we’re competing at Chestnut Hill in Week 2, Lenape in Week 4 and the CMP in Week 9. If All goes well, we’ll be at the MAR CMP as well.

How is your hood setup with the 2 vex motors?

If you look closely at the front of the hood, there’s a 20DP Plastic Gear on there. Two vex motors (Not present in the picture) drive the hood via that gear.

So they direct drive it?

Awesome job 816! The evidence of your collaboration is clear in this sleek looking machine. Any video of it in action? Can’t wait to see it in action with our team at Chestnut Hill and Lenape.

So they direct drive it?

Awesome job 816! The evidence of your collaboration is clear in this sleek looking machine. Any video of it in action? Can’t wait to see it in action with our team at Chestnut Hill and Lenape.

Thanks! There’s some video of it’s twin running, but none of the blue one. I’ll see what I can do in the coming weeks about sorting through it and making a highlight reel or something.

This is the best looking bot I’ve seen so far. Nice job! I can’t see any wires.

See you at Chestnut Hill!

My favorite feature is the lift handles. Wish we had weight for those.

My favorite feature is the lift handles. Wish we had weight for those.

Glad someone caught that.

I’ve always wanted to build a robot as homage to 968/254 of 2006. Seeing those two robots on Newton in 2006 was the most inspirational moment of my FRC Career as a designer.

Also, we’re still about 20lbs under…

Great Job!!! It looks amazing and yet again I am very impressed. I love the sleek look… Hopefully we’ll be able to play with you guys this year @ Chestnut Hill and Lenape and who knows, maybe we can pair up again in elims, and take it all the way!

The Model was originally drawn in Inventor then Rendered in Autodesk Showcase. It’s pretty accurate to the final Robot, excluding the shape of the hopper and a few little things that weren’t in the CAD.

I’m glad I was able to inspire you. When I read your post I realized inspire is right there in the middle of FIRST - I didn’t really think of it that way. I usually associate inspire with helping students on our team. I’m glad we can inspire through forums like this as well.