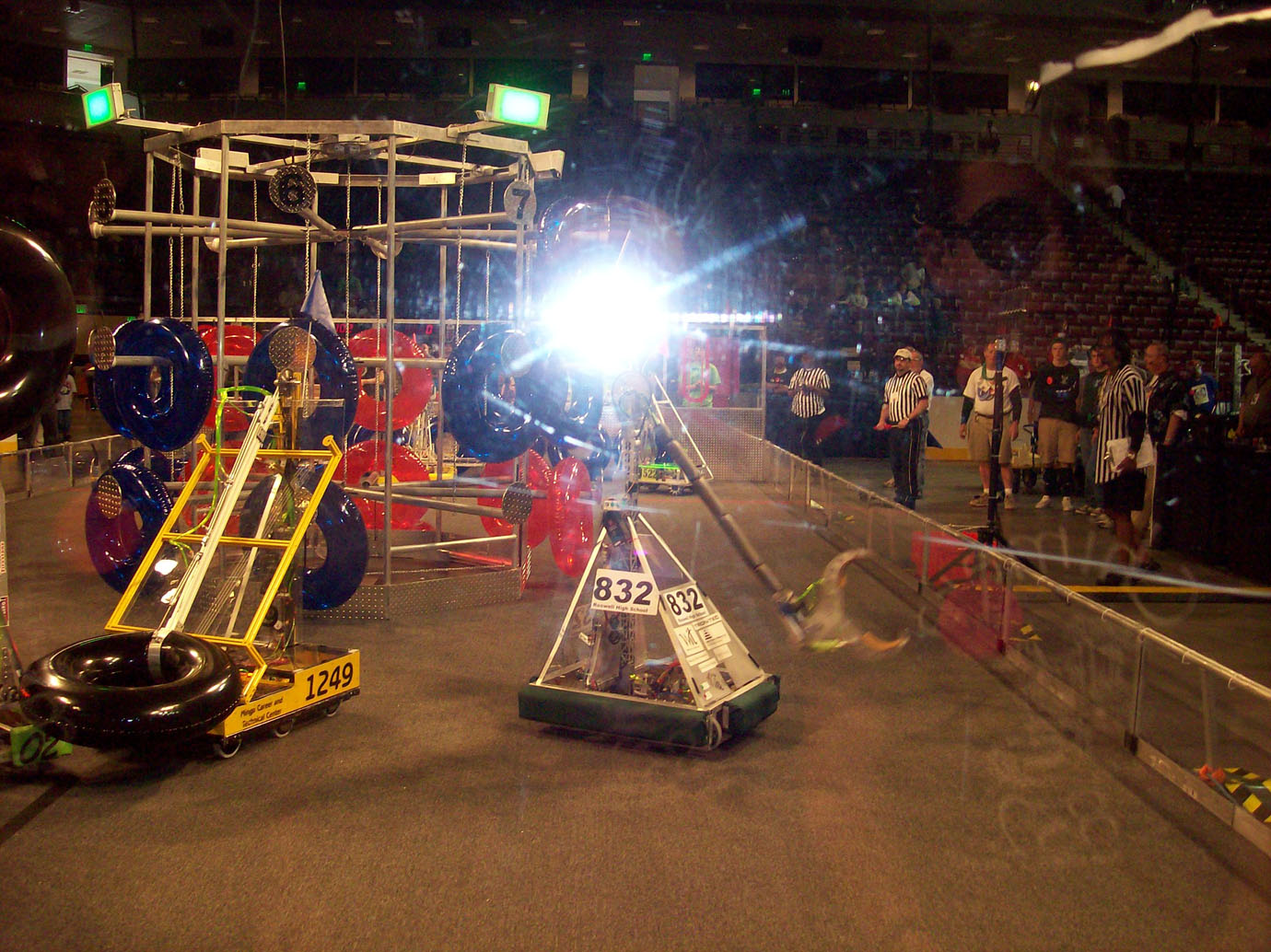 Is it just a very bright light?

It’s probably the flash from a camera reflecting off the player station.

During the final 15 seconds of the match, Team 832 quickly sent up a signal flare that blinded all opposing drivers! (Notice the reflection of the driver; he’s wearing goggles

)
Seriously, the secret weapon looks like their grabber. It looks awesome.

Oh I know what it is!
It’s a light like that which is in a lighthouse so it will lure the other robots to the rack so they will become ensnared in it’s treacherous web and leave them free to score at will!
Is that awesome or what?

Oh I know what it is!
It’s a light like that which is in a lighthouse so it will lure the other robots to the rack so they will become ensnared in it’s treacherous web and leave them free to score at will!
Is that awesome or what?

But lighthouses are meant to warn ships!

Anyone see the terrifying ghost of a man hovering to the right? :eek:

We actually considered mounting a 20-watt halogen bulb inside a parabolic flashlight housing to point at the floor to make it clearer to our driver where the robot had to be in order to pick up a tube. You’d drive until the near side of the tube was illuminated by the light patch, then you’d know that it was time to pick it up.

The inspectors said that it was ok so long as it was pointed sharply downwards (it would’ve been) and we got the thing built, but because of a change in arm geometry, we lost our place to mount it and would’ve had to mount it very low, making the resulting patch of light too big and diffuse.

Some people may have seen us building and testing it at waterloo, it was ludicrously bright.

hmm well i think its aliens, they obviously want the pneumatic piston powering part of the arm. then they will go back in time and repair their ship that broke in world war 1 so that they can come to the present again later (if that makes sense…) and steal it again. and the whole process keeps going.

I thought laser cannons were illegal?

Hah, i didn’t even see you guys deploy that during that match. You can see a little corner of our robot with a spoiler to the left…ah so thats how you won it.

Here we see 832 sacrificing one of their victors to win the match.

the aliens are comming… -q

In a Team Update that may or may not be issued, the following safety rule is added:

**<S05> **Due to risk of unforseeable consequences, teams may not initiate a wormhole for the purpose of scoring ringers from past or future matches.

This is why the Palmetto Regional is so awesome. Not because of the Krispy Kremes on Thursday morning, the awesome social, the well-fought competition, or the all-around friendly people–it’s because we’ve got wormholes.

Two words that I’m frankly shocked nobody has mentioned yet: flux capacitor.

Or perhaps it’s their Infinite Improbability Drive kicking in?

You see, the bright flash is simply there to distract you from my awesome astral-projection skills. I’m not sure if the rules say anything against spirits possessing your robots to aid in functionality, but we thought we would play it safe.

It’s Jesus. They have Jesus on their side =]