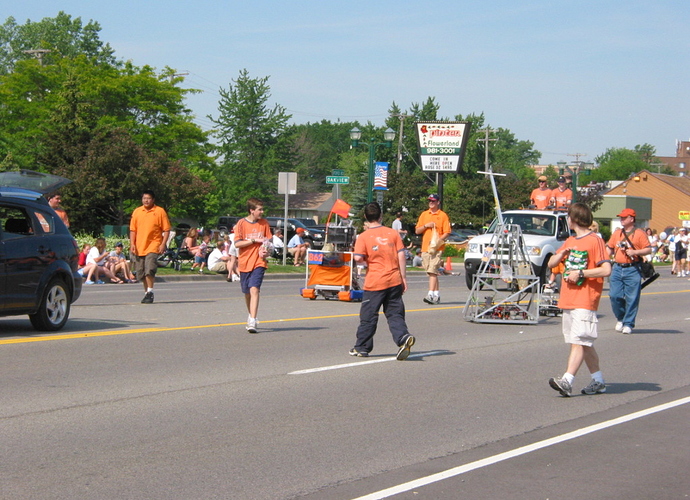 Yesterday 862 participated in the annual Canton Liberty Fest Parade. We had three robots driving in the parade Our 2006 robot Icarus, 2005 robot Carlson X, and our 2002 robot Ziff which was rigged to be controlled by a human rider. All three completed the mile long parade route down Ford Road under their own power.
JohnBoucher December 31, 2018, 7:18pm #2

Great Job. Parades give lots of exposure to a huge audience.

We’ve never had our robot drive any distance on asphalt. Did you have any tire/wheel problems? I love the idea of participating in a parade; you really had a great showing with 3 robots doing the route!

that’s pretty cool. when u say they ran under their own power, do u mean off the batteries in the kit??

Did you have any tire/wheel problems?

No real problems, but it does wear down the tires faster.

that’s pretty cool. when u say they ran under their own power, do u mean off the batteries in the kit??

Our 2005 & 2006 robots were run off the KOP batteries. The 2006 bot went through 3 batteries (including shooting balls) the 2005 bot only need two batteries. The 2002 robot/personal transport was using a different battery.

The 2002 robot/personal transport used a small yard tractor battery - it was about 35 amp/hour, and never dipped below 12.2 volts. Over a mile with 1 derek of weight, and the battery size wasn’t THAT much bigger than the KOP battery.

The motors were very hot at the end… but it was like 90 degrees F also.

The wheel chair wheels looked OK. The IRI wheel treads were looking a little smooth by the end of the parade.

We were shooting balls the entire time with the 2006 bot, and doing some spins and fancy driving with the 2005 robot.

Lots of people saw derek go by on the personal transport/2002 bot, and yelled out “you made that?” to which the students would say “Yeah… and those 2 back there!” at which point jaws would drop.

Then we would throw candy at them.