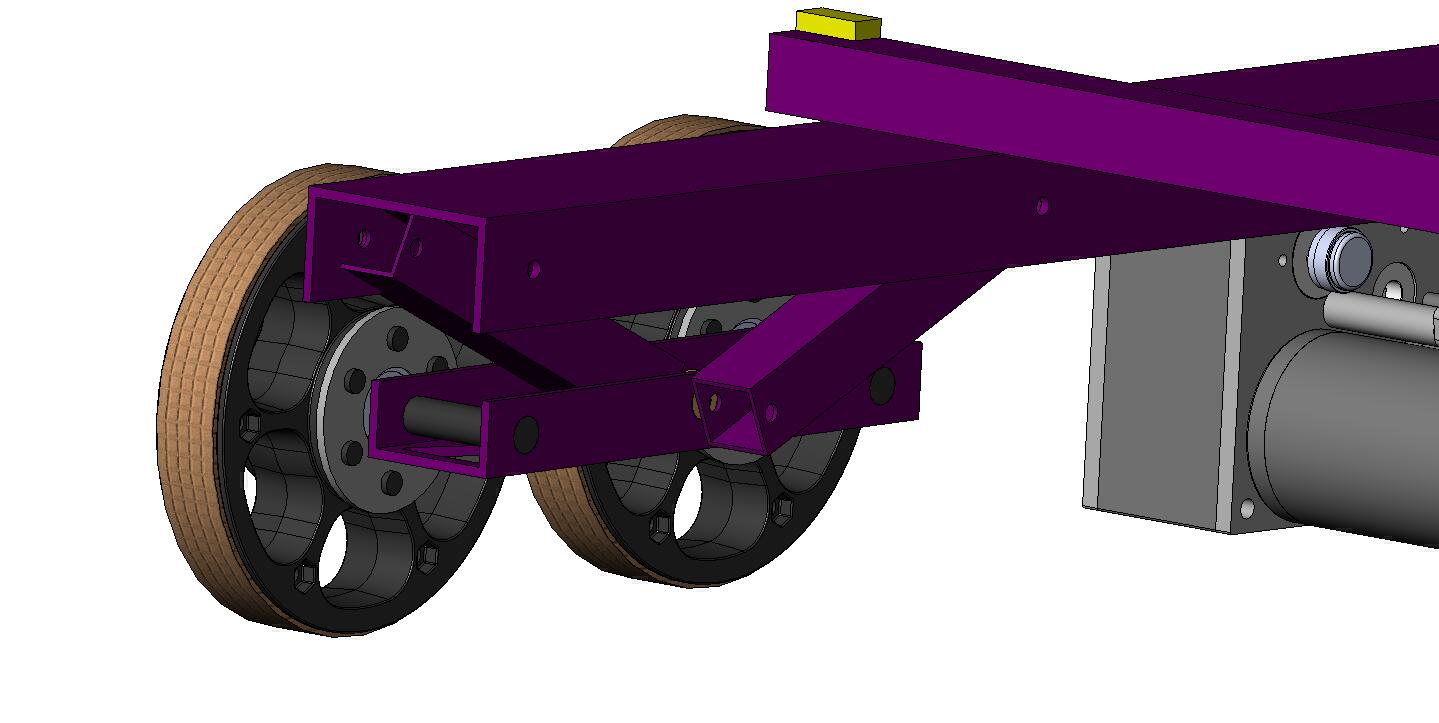 Please note, this is only a concept. I had an epiphane about a simple way to do this on the drive home today and don’t want to detail it out until I get some feedback.

First – the plaction wheel on the left is simply a placeholder for a 6" omni wheel.
Second – spacing is just what I came up with in my head at the moment and there was no real decision making put into it
Third – The mounts for the two wheels are free to rotate on the axle at the bottom of the ‘V’ via 2 bushings embedded into the mount. This axle is also the way one would drive the two outer wheels.

I’m looking at this and I am curious as to how you plan on powering the wheels. I realize its a rough sketch, but given the amount of joints it looks like you would need a rather complex system to transfer power around the hinges. Assuming that you were planning on using chains, you would need at least two separate spans to get to one side, as far as i can see, and the space for running them looks tight. One last thought, did you consider how bumpers could be mounted?

BE VERY CAREFULL! 342 tried a 8 wheel drive system with 4 independent drive pods. We faught with this drive system '05 and '06. On paper it was ingenious, but we had a lot of problems turning and machanical break downs, and it really hurt us in '06. This system was probably the coolests looking and worst functioning drivetrains we have tried.

http://academics.tridenttech.edu/team342/inventor06/images/robot/02_wheel_systems/02_wheel_assembly01.jpg http://academics.tridenttech.edu/team342/inventor06/images/week01/robot_frame01b.jpg
We went back to the kiss method with great results. Your plan sounds good, all I’m saying is to weigh the beneifits of this system agaist the simplicity and reliablity you will sacrifice. If it works, more power to you.

P.S. sorry the pics are so big

One year I proposed an 8WD to my team. It didn’t go over real well. That might have something to do with it being two pairs of pods, power-rotated as pairs. One wheel of each pod would have been an “interesting” mecanum-type wheel and the other a standard KOP wheel of the same size. Think each pod from ^^ tied to the one directly opposite it and rotated by motor.

Suspension ususally implies some sort of spring/shock setup to allow flexible wheel movement but return it to a set position–kind of like how a car sits on its springs/struts. How would you accomplish this?

Perhaps you could run a pair of universal joints between the output shaft from a gearbox to the input shaft of the “pod” to allow for movement of the suspension, then run chain/gears to the pair of wheels. This would allow for the transmission to be mounted solid. Question is…do you have the overall width to run that setup on both sides of the robot? Just a suggestion to help move your idea forward…

BE VERY CAREFULL! 342 tried a 8 wheel drive system with 4 independent drive pods. We faught with this drive system '05 and '06. On paper it was ingenious, but we had a lot of problems turning and machanical break downs,…We went back to the kiss method with great results.

Both of these designs look really cool.

Although, I think the reason you had such great difficulty is that this design creates a huge amount of “scrubbing” force when trying to turn. This extra friction is excellent when going straight, but adds a LOT of extra stress on the drive train once you start turning. Just to demonstrate my point: A dropped center wheel system, whether 2, 4 or 6 wheel drive, overcomes this because it shortens the wheelbase while maintaining a wide track. You get a much greater moment of inertia to overcome the “scrubbing” forces with that type of drive train.

I like suspensions, I’ll admit their cool, but so far FIRST hasn’t given us an obstacle that truly needed a suspension to climb. Sure, a base with a suspension could beat out an average designed base for some obstacles, but I believe a 6 wheel can be made to climb anything.

I like suspensions, I’ll admit their cool, but so far FIRST hasn’t given us an obstacle that truly needed a suspension to climb. Sure, a base with a suspension could beat out an average designed base for some obstacles, but I believe a 6 wheel can be made to climb anything.

I agree. I also believe a dual independent track design http://a.abcnews.com/images/Technology/ap_packbot_071026_ms.jpgwould be a simple approach. But if you decide to screw simplicity, you could always go with the “Big Dog” design:rolleyes: .

That’s a great idea and it looks really cool in the pic. I just don’t think that’s it is a practical idea unless you know exactly what you are going to need it for. Its a great idea and I will start to work on one now just b/c it looks so cool. Just an idea you could make each wheel pod with its own suspension system so that it could climb things better I’ll try to draw something up and post it at a later date.