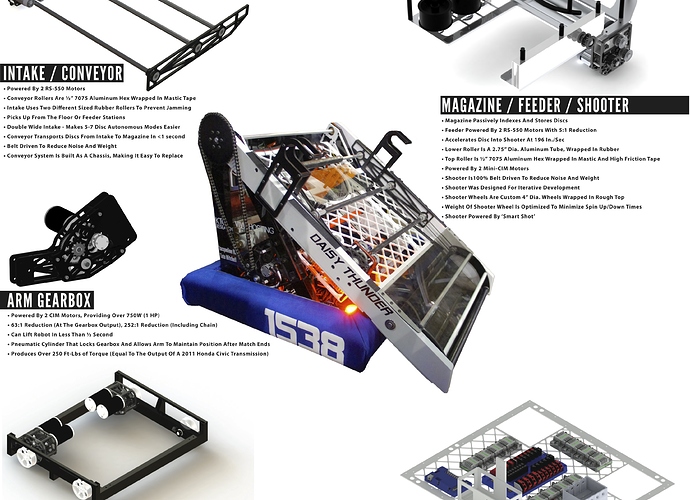 This is the poster we have in our pit that describes the features of Daisy Thunder.

Check out our “Regional Highlight Video” to see Daisy Thunder in action: http://www.youtube.com/watch?v=MBbEuKhktJI

Beautiful Robot! I honestly would not be able to tell between robot and CAD besides the fact that your CAD has no belts or chain.

Very informative poster. I wish all teams did something like this.

What cams do you use for tensioning?

Would you mind providing more details about your feeding system?

Turning on 4 wheels = Turning on 4 wheels, whether or not there are more that are off the ground…I presume that the length of the wheelbase was short enough that they decided that just having 4 would do the trick.

Turning on 4 wheels = Turning on 4 wheels, whether or not there are more that are off the ground…I presume that the length of the wheelbase was short enough that they decided that just having 4 would do the trick.

This paper explains the physics quite nicely. A rule of thumb I have used is if your wheel base is less than your width, you should be able to turn with a 4 wheel skid.

Would you mind providing more details about your feeding system?

From day one we wanted the feeding system to be as fast as possible with the idea being the faster you shoot discs, the more discs you can shoot, the more points you can score. Originally we were going to use some sort of pneumatic cylinder to push discs into the shooter, but we felt we could get equal or greater throughput using a roller system and we wouldn’t need to add a compressor.

For the most part, the feeder is pretty straight forward. When the discs enter the magazine, gravity feeds them to the bottom and the discs stack up on top of the lower roller (the 2.75" dia. drum). When we’re ready to shoot, we turn the feeder system on and the bottom disc gets kicked out from the bottom of the stack and fed into the top roller.The top roller is there to prevent the disc from sliding into the shooter when the arm is down.

A lot of teams that use home depot buckets or vertically stack discs have had problems with discs jamming. “Smart Shot” helps prevent jamming problems. When the intake system is on, the feeder actually runs at a low speed. When the first disc enters the magazine, the feeder continues to run until the IR sensor detects the disc, then the feeder turns off. By doing this, the lowest disc is in contact with the top roller and each subsequent disc in the magazine gets stacked at an angle which prevents the infamous nesting problem.

The purpose of dropping the center wheel is to decrease your wheelbase (the distance between wheels that are in contact with the floor). Early on we decided to go wide so that we could make the robot’s intake as wide as possible. The first drivetrain design we had the day after kick-off had 6 wheels, but we found that the length of the robot was 21.5" and the distance between the front and back wheels was something around 14". With the drop center the wheel base was about 7.5". At this point we looked at our older robots and found that the wheel base was between 12" (2012) and 14" (2011). In the end we decided that the extra wheel was totally unnecessary and that we could save ourselves a good chunk of hardware by eliminating it from the design.

Great job with the layout and detailed subsystem/component views as well as the clean layout.

This looks awesome! Could you explain your “command driven autonomous”? I think I’ve got the gist of it, but I would love to hear an explanation of how it works

This looks awesome! Could you explain your “command driven autonomous”? I think I’ve got the gist of it, but I would love to hear an explanation of how it works

We push commands on to an STL deque and read them one at a time with a special handler for each type of command. For example, the drive command uses PID to drive to a specific distance in a straight line using an encoder and a gyro. Commands also have timeouts, so that if something goes wrong and the robot never reaches its setpoints, it will automatically move on to the next command.