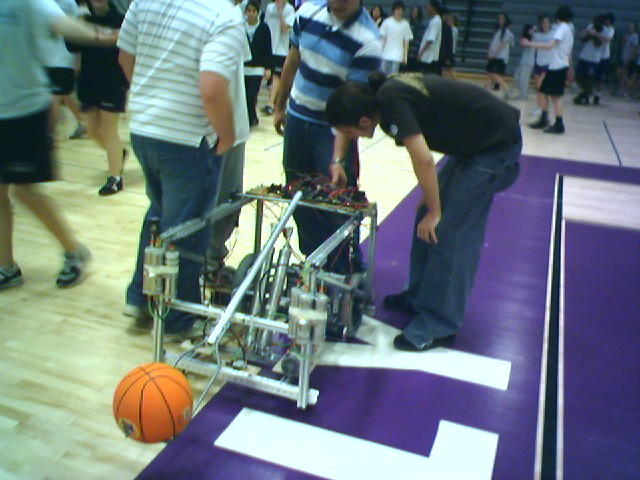 Our Basketball Robot. Thats how we entertained the crowd during the home games (Half Time). It really works… sometimes better than the human players

How does the crowd like it? Do you find this raises awareness and reduces the “nerd” steriotype?

All in all, that really is amazing, any chance we can see some closer shots of it?

Yea I find that a REALLY good idea. Tell me more…

Unfortunately that is the only picture we have of this robot. We built it in the Pre-Season (before kickoff). We didn’t use it many times, and by the end of the build season this year, we had completely stripped it for parts. It used FIRST trannys, 4 10" KOP wheels, 2 of the largest pneumatic cylinders we had, 2 compressors, and 6 storage tanks. It drove crazy fast and it was almost impossible to control. After extensive tuning, we were able to get the ball in the net about half the time.

Suprisingly, the school loved it. They have always responded well to our displays. In the football season we built a robot with a large pneumatic arm to roll down the track and wave a flag during halftime. Many of our current members say that they were influened to join the team when we showed off what we had built at the basketball and football games. We are now in the process of building a small promo-bot to bring to presentations and displays. Because of the small scale of this robot, we’ll be able to let members of our audience take control.

As we find ourselves becoming more and more recognized by the community, we are taking on more of these kind of projects to promote our team. And they work!

Sorry for this massive thread revival. But I’ve been searching for this picture for a while now and just thought it was a funny coincidence.

The basketball looks near identical.

Wow. That’s me in the white striped shirt with my hands in my pockets.

This project is a seriously cool thing to be reminded about.

Wow. That’s me in the white striped shirt with my hands in my pockets.

This project is a seriously cool thing to be reminded about.