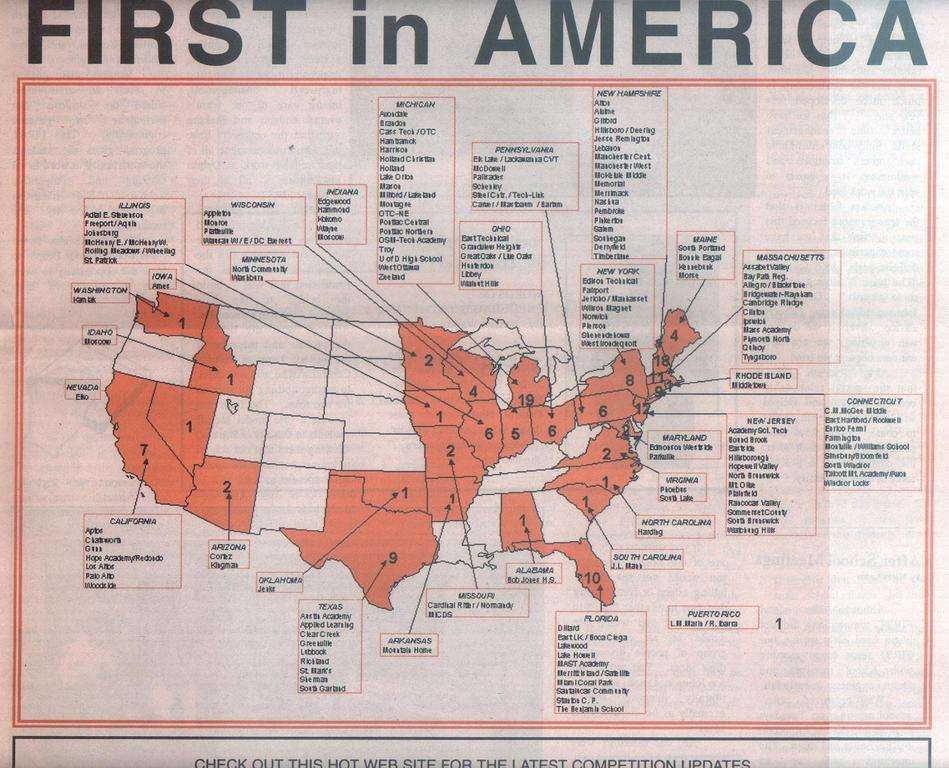 Sorry, the picture is so big. I left it big so you can read the team names.
Can anyone guess what newspaper this is from and what year/month?
Give up? March of 1997 from The Tomahawk, a Pontiac Central High School publication. ChiefDelphi before the ‘Chief’ was added. Though everyone would enjoy this.
It shows what part of the country each team is from.
Enjoy!
Specialagentjim December 31, 2018, 3:48pm #2

Wow, so there was a previous team in Idaho, I didn’t know that.

It’s cool to see the changes in size that have occured in FIRST.

I think that is the first time that I’ve seen South Lakes (the school where 116 was until 1999) refrenced anywhere other then our old team website.

Hey, that is so awesome! Lol it took me a minute to find my team. I realized the little smushed word in Maryland was Parkville, not something funky. Haha. It’s cool you found that, our rookie year was '97. =D w00t!

This was way before my team’s time, but I’m pround of my state- the most teams out of any state at the time. 14 of those 19 teams are still running.
_Alex

This was way before my team’s time, but I’m pround of my state- the most teams out of any state at the time. 14 of those 19 teams are still running.
_Alex

Michigan still leads FIRST with 89 teams ,just edging out New York with 86 due to an explosion of rookies (20 so far this season).

You know, it’s kinda funny how much South Carolina’s presence has grown since 1997. (It’s also kinda sad that I couldn’t remember whether or not JL Mann still had a team. Nowadays, we know them as 281.)

This was very nice to see! Although I was surprised to find that U of D High had a team and since then have ceased to support one… They are like my high school’s other brother school, maybe we can convince them to get one restarted next year.

Not surprising considering the amount of industry around Michigan (auto companies). They’ll no doubt be the first state to break the 100 team barrier.

Florida tends to be very volatile when it comes to teams. So many new teams start and so many older teams fail, that it all kind of works out to be roughly the same number of teams on average.

I also find it funny that for as long as I can remember, Panzer Aluminum has won the rookie award at UCF every year I’ve been in FIRST. lol

Isn’t it interesting that if you took all the teams on that map you still wouldn’t fill half of the Nationals this year.

That year was our first year - the year of Toroid Terror. Our robot, the Silver Eagle, was plywood, copper tubing and aircraft foam from FIRST because that is what we could work with using the hand tools we had. It blew out the Tekin rebel speed controllers regularly. The power drill batteries would fall out when we got hit hard enough. But it moved and was the pride of my guys. We later retired it and made it into a soda can hurler for demos to the grade school kids. Those guys are all past college now and in the engineering world.

I am proud to say that most of the 12 NJ teams are still playing and doing quite well. And we haven’t given up on reviving the ones that fell by the wayside.

And the years have flown by- gee I’m getting old.