pic: Another Drive for CD. 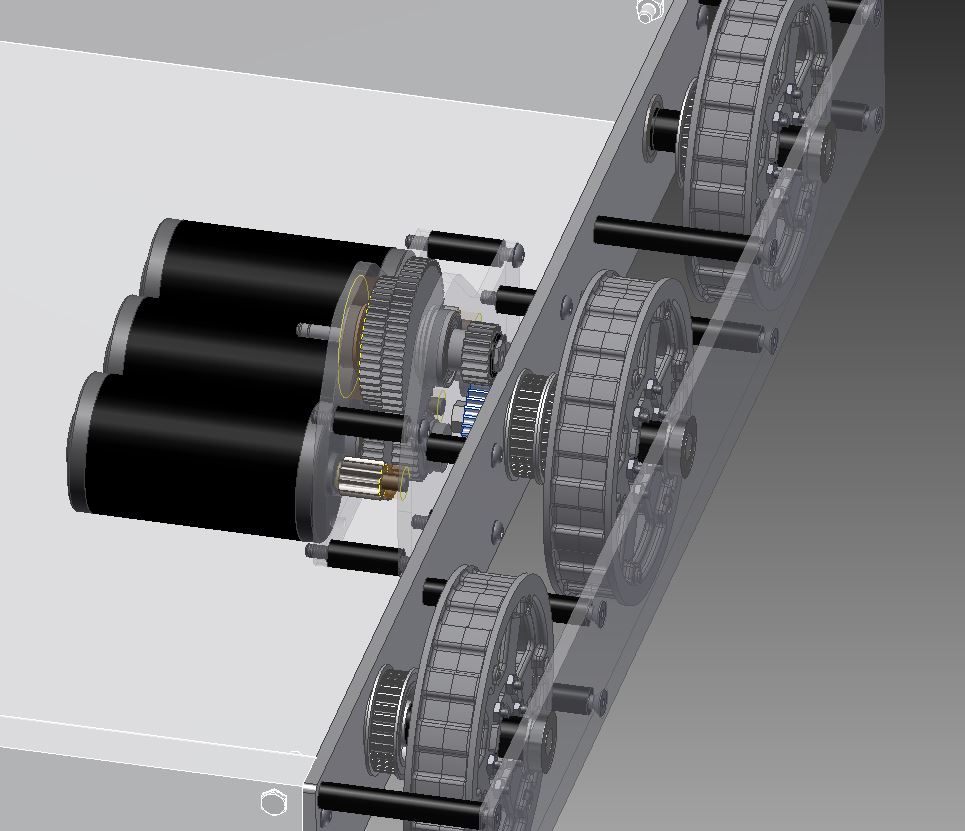 Why 6" over 4" wheels? You could save some weight that way on gears.

I’d rather see that small gear above the top plane of the side plates also have a 3rd plate for a bearing, maybe something that fastened to the outside end of the inner side plate. However, your design would probably be OK in practice, since the shaft is supported well and the overhang is small.

For what it is worth: in our side plates we put a grid of 17/64" holes 1/2" on center, everywhere they will fit. Although the side plates get a little lighter, the real reason is that now we can bolt most anything to anywhere as needed.

I’d be a little worried about that gear (18 or 20 tooth?) that’s hanging off on the end. We ran a setup like this, with the gear about .75 away from the plate, and we had nothing but trouble. When under load, the shaft can bend, so the gear was never in the right spot, and it wore really quickly and failed with under an hour of drive time. We had this failure with both aluminum and steel gears. The sloppy fit between the hex shaft (exactly .500) and the hex bearing (~.510) doesn’t help.

Originally my idea with was to make something with more ground clearance for use outdoors however, at some point I realized this setup had some constraints which wouldn’t allow how much I wanted so I just said whatever and stuck with the 6". Figured I’d see where it brought me and do another one later.

The gears on the 3d stage are 24t & 54t. I probably will add support especially since the idea was for outdoor use (I assume outdoor use would offer more stresses than average field play).

With such big wheels, even if you’re really attached to live axles (no reason to use them on the outside though) I would use the Vex 42T VersaPulleys instead of individual pulleys on a hex shaft. It saves you some width (eliminate two flanges) and it lets you use dead axles on the outside.

If you get creative with VersaHubs, you can even couple the final gear directly to the middle wheel and have your transmission directly drive it. This lets you make everything dead axle and simplifies things a little bit.