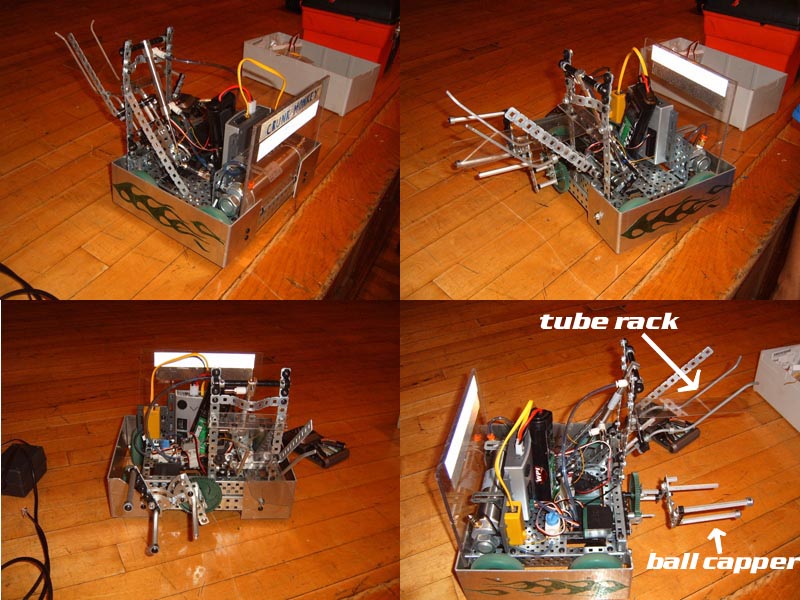 Here is a second series of four pictures of one of the WPI Frontiers Vex robots. This one was the Crunk Monkey (the team that I was on) team’s robot.

This was probably the most complex but most sophisticated of the six Vex robots there are WPI. This was also the only one that could cap the 7-Point Tennis Balls onto a Tube, and then put that capped tube into the walled [2x multiplier] scoring zone.

The robot was all four-wheel-drive, powered by two Vex motors running at a 1:1 gear ratio. EDUbot sprockets and chains transfered the power to the other two wheels.

The were two seperate manipulators on the robot, either one capable of scoring indepently. The tube rack, which would hold up to 2 tubes (uncapped or capped), and via a pneumatic cylinder, would tilt the rack backwards so that the tubes would clear the 3" wall around the 2x scoring multiplier zone.

The ball capper (which rotates) would pick up the tennis balls off the ground, and rotate them over onto a tube on the tube rack. The tube rack, when slightly rotated, would also be able to spear tubes lying sideways on the field. By rotating the ball capper all the way up, the speared tubes would clear the 3" wall around the 2x scoring zone, so that those tubes could also be deposited in there.

In our first match, by only putting the “Uber-tuber” and a tennis ball-capped-tube into the walled scoring zone, the high score of 47 points was set.

Other details about the robot are that it had no onboard sensors, and the autonomous would run off dead-reckoning. The autonomous code was to gun it full speed and try to hit the match multiplier button, a small button on the side of the field that, if hit during autonomous, would double the points during the match for your team. We successfully hit the button several times, but only at the and of autonomous for a 1.5x match scoring multiplier.

The side panels with the green flames on the side of the robot are 1/8" aluminum, and leave only about 1/4" ground clearance. Other non-vex materials included on the robot were pieces of Lexan, including one VERY thin, but highle flexible piece that pushed down on the tube rack when in the up position so that the tennis balls atop the tubes wouldn’t be knocked/fall off.

Only three motors and one double-acting, 4mm-bore pneumatic cylinder were used on the robot.

I was also at Frontiers, although I did the math program rather than the robotics one. I talked to the guys who build this robot, and this was by far my favorite robot. It was really complex, but they managed to pull everything off. If I remember correctly, it was tearing it up at the competition too.