pic: Anyone Remember These? 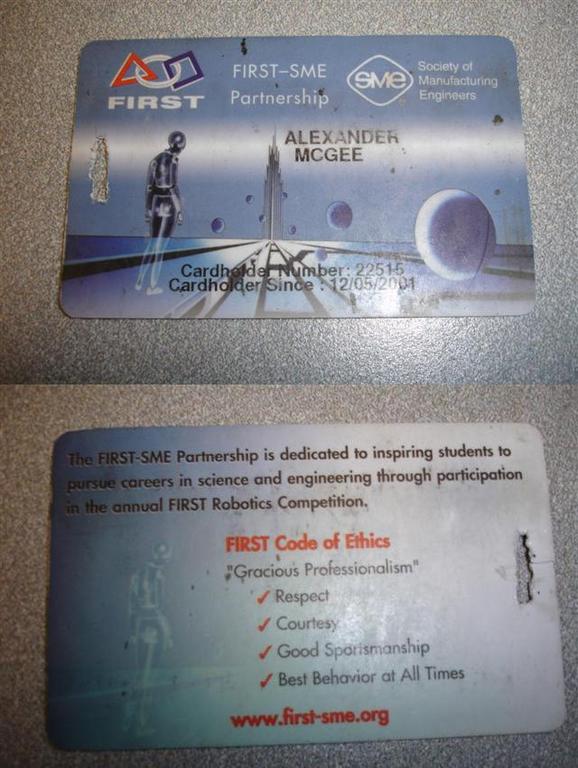 I was talking with a friend at Nats, and we got into the discussion about these old FIRST-SME cards. Who still has theirs? I keep mine in my wallet!

They are pretty cool, and bust be some sort of nostalgic FIRST item now!

So who has one?

I managed to acquire one from an old WildStanger and think it is really cool… do we know why we do not have them anymore? Is it just because FIRST has gotten so large?

I managed to acquire one from an old WildStanger and think it is really cool… do we know why we do not have them anymore? Is it just because FIRST has gotten so large?

Cool, would you happen to have the one from the year before that? I might do some looking today and see if I can find mine.

Cool, would you happen to have the one from the year before that?

No… mine isn’t even really mine… it is one of my friend’s, I found it and went to give it back but he told me to keep it… I guess I am now Fernando.

I know I have mine laying around somewhere here…

Wow, I remember these but I don’t reallly remember their purpose. If this would have been posted a couple months ago I would have been able to produce pictures of the one already shown and the one from the year before that. I’ll look around my room, but I’m pretty sure I threw them away when I bought a new wallet.

I guess I am now Fernando.

i still have that one and the one from the year before. Was there really any purpose to these cards?

i still have that one and the one from the year before. Was there really any purpose to these cards?

Weren’t they supposed to get you into the Team Party?

I have mine from 2001 hanging on the “FIRST” corkboard above my bed, along with my team 93 ID cards.

If I recall correctly, they started that back in 2000, during my rookie year in FIRST. I think the purpose was a database for scholarship information, and they even claimed that you needed one of those cards to get into the wrap party in EPCOT, but I’m pretty sure that wasn’t the case when the mentors came back to the pits with the bracelets that they still use to this day.

Here are my three.

Notice the date on the last card says member since 2002 not 2000, when I went to resubmit to get that years card; I accidentally filled out a new form.

I am pretty sure they mailed these cards out to each individual.

They probably stopped making them because they were getting too expensive. 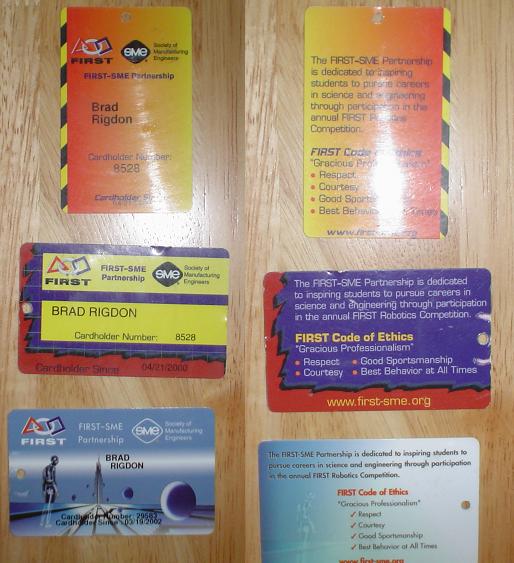 Yeah i remember these, i still have mine from 2001 and 2002. Does anybody remember the design contest for the 2002 ones? When you registered they had 4 different designs and you picked one and the most popular one is what they actualy shipped out.

mine is still in my walet

I still have mine laying around my room somewhere. I guess its time to go and find it.

I refer to these as “SME badges” because you were required to register with the Society of Manufacturing Engineers on their website to obtain one.

I believe SME intended this to be a recruiting tool to gather a contact database of FIRST students and send them information designed to get them interested in their organization and manufacturing engineering in general. I’m not 100% sure, but I don’t think they were satisfied with the level of response they were getting so they stopped sponsoring the badges. That, and too many mischievous people probably tried to use the system to get more than one (just who is “Poindexter Hoffman” anyway? Eh, I was young and dumb back then. Now I’m just plain dumb).:

I always thought these were neat, and I still wear mine at competitions to this day. One cool thing SME did was to post multiple badge designs on their website and let people vote on their favorite:

I believe FIRST did require you to wear them to gain access to the team party and also to signify your attachment to the FIRST program in general as you were walking around Epcot and the parking lot in Florida. 2002 was the last year they had these badges. Ah, those were the days.

Yeah I still have mine. Well, half of it atleast. Out of spite my brother cut it in half. I so hate him. $10 to the FIRST one to beat him up (pun intended).

our mascot winston is registerd…so he wears all 3 cards…

I still have two of them.

I’ve got three of them…Still wear them at competition!