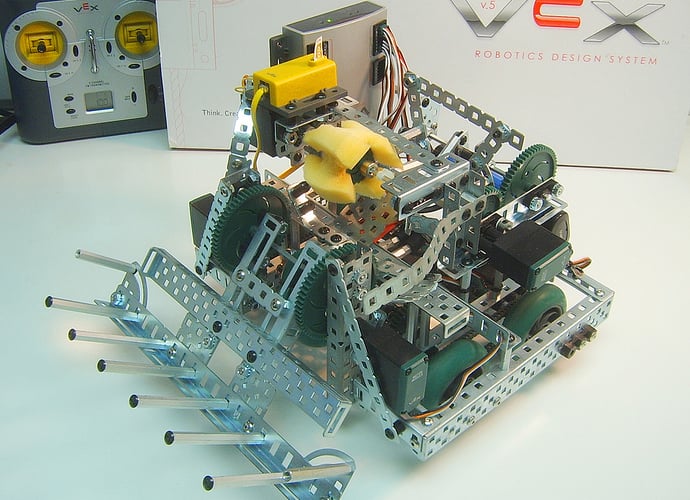 Since I didn’t know which of the three scoring methods would prove victorious - pushing balls to your side of the field, scoring in the high goal, or parking on the ramp, I decided to do all three. I’m still amazed myself on how many mechanisms I was able to pack into a one foot cube size requirement.

Here’s the specs: 2 motor 4WD drive, dual motor front scoop that can load 10 balls at once (although if you drive a large pile of the small wiffle balls into the wall of the field it could pick up 14), a ball indexer, a ball shooter that could score the whiffle balls into the center goal while parked on the top of the 30 degree ramp, and a mechanical brake that drops down and can lift the front of the robot off the ground.

I think only one motor would have been sufficient to power the front loader, but since I removed the clutches from those motors to put shaft collars on there, I decided to be safe and split the load among two motors to alleviate any chances of stripping a motor.

it was great playing against you man!

that is some quality work right there.

Art, you are crazy at VEX robots. Keep up the solid work, and maybe write up some sweet white papers people can use to build their own mechanisms like these.

Too bad i didn’t get to face you. I’m sure it woulda been a close match and a fun one at that.

That was fun to watch. You are a master with VEX parts.

Wow!!! :ahh: Very Nice!!! Do you have any videos of this thing in action? Really good work man…Congrats on the win

Thanks everyone! I really enjoyed coming out to Rochester to see everyone and compete in the Vex Tournament!

Just wait until you see some of my other projects I’m working on, including one for Innovation FIRST/Vex Robotics (which I should hopefully be wrapping up later this week; college applications, scholarships, and essays, along with the RCCR robot and tons of school-related activities have eaten up much of my time lately… :-/ ). This one will involve a white paper to build a Genuine Art Dutra-designed Vex Robot using 99% Starter Kit only parts.

Another project of mine at the moment is one in which my father and I are building an off-road (specifically snow) robot at our house, complete with snowmobile tank treads, 80/20 frame, dual CIM AndyMark trannies, 2004 FRC IFI Control System, and with the possibility of several onboard air cannons. Currently, we have most of the 80/20 machined and bolted together for this robot, and are currently awaiting a few more orders from McMaster-Carr and a bunch of CNC’d sheet metal parts for this robot to continue construction. This 'bot will probably be wrapped up around the beginning of the 2007 build season, and will be used to help 228 recruit a specific sponsor.